by Mark Kerr and Andrea Gunn

A hunger for knowledge

Alfred Bader – an Austrian Jew of Czech descent – arrived at Queen’s on Nov. 15, 1941, greeted by University Registrar Jean Royce. Professor Arthur Jackson showed Alfred around campus before instructing the new student to go to the chemistry building to claim a locker and equipment for lab work.

Alfred's circuitous path to Queen’s began in Vienna in 1938. He left high school reluctantly, as Jewish children in Austria were then forbidden to stay in school past the age of 14. That same year, he was sent to England under the Kindertransport program, which removed thousands of Jewish children from Germany and German-annexed countries. In 1940, with other German-speaking refugees, he was deported to Canada, where he was detained in an internment camp in southern Quebec. Alfred was released from the camp in the fall of 1941 thanks to Martin Wolff, a Montreal journalist and historian, who sponsored Alfred and took the teenager under his wing.

With Mr. Wolff’s encouragement and support, Alfred decided to further his education. He was accepted at Queen’s and he began his studies mid-term in the Faculty of Applied Science.

"I was a free man, I had been welcomed into a Canadian family and had been accepted by a prestigious Canadian university," he recalled in his autobiography. "I was determined to do my best."

Alfred flourished at Queen’s, getting involved in many aspects of campus life. He became a member of Science ’44 student co-op in second year. "I do not think I was a good member of the co-op," he wrote. "I certainly didn’t enjoy snow shovelling or peeling potatoes, yet most of the members were patient with me, and I admired their savvy."

He joined the debating society and won the Roberta McCulloch Scholarship in Public Speaking in 1945. "How silly could I get? Public speaking – and me with my thick German accent! [But] I tried and won."

Hints of Alfred’s future as a gifted chemist and passionate supporter of arts and culture appeared during his undergraduate studies. His dissertation on rare metals earned him first place in the Technical Paper Competition. Soon after completing his Bachelor of Science in engineering chemistry, he completed a Bachelor of Arts in history. He remained at Queen’s for his Master of Science in chemistry before attending Harvard University and receiving his PhD in organic chemistry in 1950.

"He never forgot the opportunities that a university education opened up for him," says Principal Woolf.

A desire to give back

Reminiscing to the Queen’s Alumni Review in 1991, Alfred wrote, "When I was accepted by Queen's in mid-1941, I was scared and shy and selfish. Scared because I’d been told on leaving the camp that I must not tell anyone where I’d been and had to report weekly to the RCMP. Shy because what could I say to fellow students who told me they’d come from Glebe or Lisgar or KCVI and then asked where I’d come from in the middle of November? And selfish because I thought one had to be to survive. Yet my fellow students in class and in Collins House, the Sc’44 Co-op, put up with me. And many of the professors, Registrar Jean Royce, and Dr. W.E. McNeill, who introduced me to debating, treated me wonderfully – as an individual, not as POW #156."

"This kindness brought me out of my shell, and over the years my contacts and interactions with Queen's staff, alumni, and students have continued to give me great pleasure."

The beneficiary of several student awards and bursaries himself, Alfred always knew he would help other students, given the opportunity. In 1948, while he was a student at Harvard, Alfred suffered the loss of Martin Wolff, who had been like a father to him. Mr. Wolff left $1,000 in his will to Alfred. Instead of putting those funds toward his own education, Alfred used the inheritance to establish the Martin Wolff Scholarships in Civil Engineering at Queen’s.

Alfred would go on to establish many more awards, bursaries, and fellowships at Queen’s, giving numerous students access to the educational experience that had changed his life. Among the awards is the Principal Wallace Freedom of Opportunity Award, which Alfred and his wife Isabel established in 2013. The award, named in honour of the principal who paved the way for the young refugee to come to Queen’s in 1941, goes to a first-year international student entering an undergraduate program; preference is given to a refugee student.

Alfred’s support for students and researchers went far beyond just providing financial support. A lifelong scholar, he took a great interest in the work being done at Queen’s. "During his visits to campus with his beloved wife Isabel, Alfred delighted in meeting with scholars, students, and other friends, to exchange ideas and to encourage them in their fields of studies," Principal Woolf says.

A man of high standards

Alfred Bader, an astute entrepreneur, built his fortune through the chemistry industry. He worked as a research chemist with a paint company in Pittsburgh soon after graduating from Harvard. At the same time, he co-founded Aldrich Chemical Company, which specialized in supplying reliable chemicals for research purposes. The company grew to be an industry leader.

Even as his business ventures enjoyed immense success, Alfred never defined himself solely by his work. He referred to himself as a "chemist collector," acknowledging his twin passions for science and the arts. "Paintings do cause strong emotions," he wrote, "and I buy for my own collection only paintings I really love." He also desired to share his paintings, knowing that they would inspire other art lovers and scholars. In 1967, Frances Smith, the curator of the Agnes Etherington Art Centre at that time, asked Alfred if he would be interested in donating a painting to the gallery. Alfred agreed, giving the campus art gallery an early 16th-century painting that had belonged to his grandfather.

Over the years, Alfred entrusted to the Agnes nearly 200 paintings from the Baroque era, including three paintings by Rembrandt. Alfred transformed the study and appreciation of art at Queen’s through his sustained and extraordinary generosity, according to Jan Allen, the director of the Agnes Etherington Art Centre.

"As a result of his vision and passion, the Agnes Etherington Art Centre ranks among world centres for the study of the School of Rembrandt," she says. "Through endowment of the Curator and Researcher of European Art and through timely support for research and publication projects, facilities, and programs, Dr. Bader has ensured wide enjoyment of this enduring legacy."

Jacquelyn N. Coutré, Bader Curator and Researcher of European Art, worked closely with Alfred, much like her predecessor, David de Witt. Dr. Coutré says Alfred’s impeccable eye and true thirst for knowledge shaped The Bader Collection at the Agnes into one of the most formidable collections of Rembrandt and Rembrandt School works.

"Clearly invigorated by the pursuit of new acquisitions, he built the collection with great discernment and thought." she says. "The gift of Rembrandt van Rijn’s Portrait of a Man with Arms Akimbo in 2015 exemplified his collecting sensibility: a spectacular late portrait by the master that unites The Bader Collection in rich ways."

While delivering a vast world of art to campus, Alfred also sought to extend Queen’s global presence by donating the 15th-century Herstmonceux Castle to the university in 1993. The 500-hectare estate in East Sussex, U.K., is now home to the Bader International Study Centre (BISC), which offers a number of programs on its historic campus as well as access to learning opportunities throughout Europe, including the study of art in many museums and galleries.

Herstmonceux Castle is a unique asset for Queen’s at a time when internationalization is, more than ever, a key element of the university’s success and reputation, according to Tom Harris, Queen’s interim Provost and Vice-Principal (Academic).

"For 20 years now, students from Queen’s and from all over the world have had a transformative educational experience at the spectacular Herstmonceux Castle," Dr. Harris says. "The castle is a proud and central part of the larger-than-life legacy of the Baders."

Another stellar aspect of that legacy is the spectacular Isabel Bader Centre for the Performing Arts, which opened in 2014. In discussions with Queen’s, Alfred said he wanted to do something special as a legacy to his wife, Isabel. Alfred and Isabel initially met in 1949 and developed a strong bond over the next year, before deciding to part ways in 1950.

Alfred and Isabel reconnected in 1975 at Bexhill in Sussex, close to Herstmonceux Castle, where Isabel was teaching. Isabel’s love of music and theatre prompted Alfred to provide a transformative gift for the creation of an acoustically superior concert hall and theatre at Queen’s. The new home for the creative arts at Queen’s, located on the shore of Lake Ontario, also serves as a hub of vibrant artistic study, creation, and exhibition for Kingston and the region.

"Alfred set his vision and standards high," says Tricia Baldwin, the director of the Isabel Bader Centre for the Performing Arts. "He was a man who detested mediocrity and treasured the vigour of excellence. His creation of this state-of-the-art, multidisciplinary centre is but one example. Many do well in life, but not all have the will and imagination to create something extraordinary that transforms the lives of others."

"Queen’s has grown in size, student numbers, and many other ways since my happy and life-altering days in the early ’40s," he said. "The world seems to have gotten smaller, and we need even greater opportunities to interpret, understand, and appreciate our world."

Further reading on Alfred Bader's life and his support of Queen's 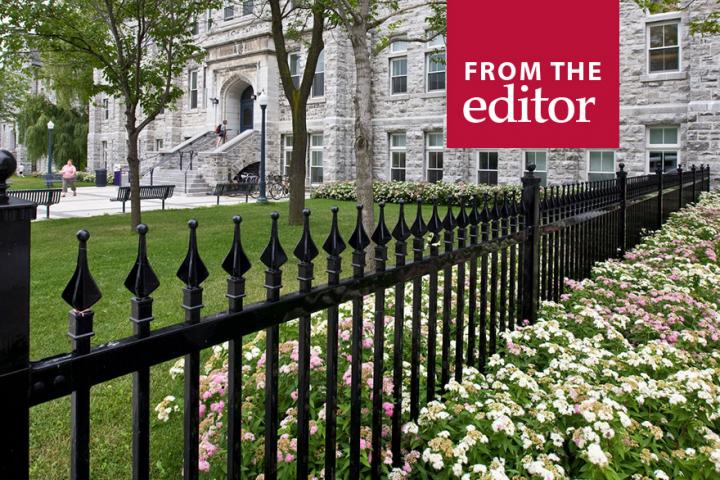 This is one of my favourite photos taken at the 2016 exhibition unveiling Rembrandt’s Portrait of a...
View From the editor: On Alfred Bader's legacy 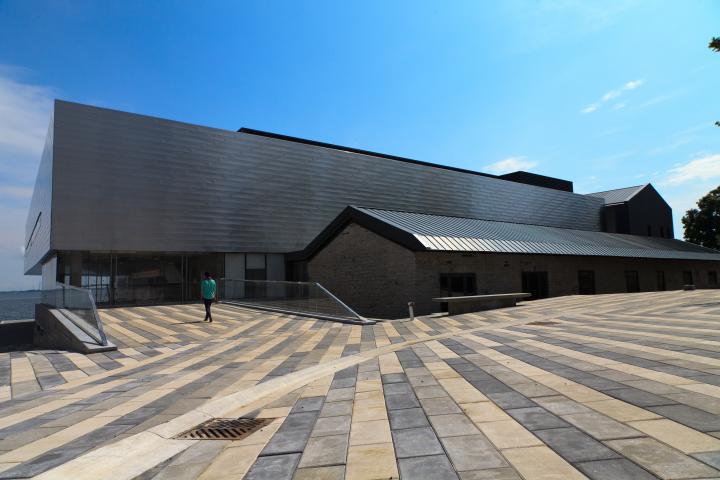 When Judith Brown took a call from Alfred Bader and Isabel Bader one Sunday afternoon last September...
View A helping hand from the Baders
Top