Drift: Art and Dark Matter is a multi-faceted residency and exhibition that brings artists and scientists together to engage with one of the biggest mysteries in modern cosmology. Scientists know that gravitational “glue” holds the galaxies in place, but no one can yet detect this invisible “dark matter.”

Artists and scientists alike embark on speculative adventures in search of the intangible, says Sunny Kerr, Curator of Contemporary Art at the Agnes Etherington Art Centre. Drift: Art and Dark Matter, now on display at the Agnes, aims to open up transdisciplinary avenues of exchange and to yield new understandings of our place in the universe.

Broader contexts across art and science – disciplines that don’t always connect – were vital while organizing the project, says Kerr.

It is named for the drift, the horizontal tunnel in a mine – in this case, the passageway between a working copper and nickel mine and the clean lab spaces of SNOLAB, an expansion of the original underground facility where McDonald’s Nobel discovery was made and where detection work continues.

In July and October 2019, four artists were invited to engage with physicists, chemists, and engineers contributing to the search for dark matter. Nadia Lichtig and Josèfa Ntjam, both based in France; Anne Riley, who lives in Vancouver and is Slavey Dene and a member of Fort Nelson First Nation; and Jol Thoms, from Toronto and based in London, U.K., visited SNOLAB’s surface and underground facilities and toured the Arthur B. McDonald Canadian Astroparticle Physics Research Institute’s research facilities at Queen’s University. An exhibition of resulting artworks runs from Feb. 20 to May 30 at the Agnes and then will embark on a national tour.

Artists selected for the project didn’t have to be versed in physics. Each, however, had to be open to straying from typical art spaces to learn about particle physics, which involved travelling two kilometres down in an active mine, walking through the drift to the lab, showering (dust can compromise sensitive experiments at SNOLAB), and changing into special clothing that reduces dust in the lab.

From a curator’s perspective, what is most thrilling about Drift is the receptivity to possibility. “Art and science share a sense of adventure, of being open to the unknown,” says Kerr.

Of the resulting exhibition, Kerr says he is “pleased with the diversity of the responses among the artists, from visceral and poetic to cerebral and intellectual and even socially critical.” In addition, a book, a digital exhibition, and a series of programs aimed at different audiences will be offered. But the process itself, driven by the artists’ own approaches and responses, is what’s most valuable, Kerr emphasizes. “It’s engaging in this process with the McDonald Institute and SNOLAB that has been really eye-opening and deserves attention, aside from the various outputs.”

And there’s much more to discover. “We’re proceeding in a way that we can do this again,” says Kerr. “A lot of potent new avenues have materialized, questions that haven’t been a sustained focus since the Renaissance, when art and science were much closer together.”

Queen’s Engineering is active on a number of fronts related to Equity, Diversity, Inclusion and Indigeneity. The faculty recently became one of six participants in IBET: the Indigenous and Black Engineering and Technology PhD project, through which Queen’s Engineering is offering two $25,000 scholarships each year to qualified Black and Indigenous PhD scholars. And there is great pride in a student-led initiative to join the National Society of Black Engineers, accomplished recently by alumna Thea Rainford (Sc’20) and current student Geneviève Norris-Roozmon. The faculty’s commitment to addressing issues regarding marginalized communities in STEM is also active in youth outreach, with the recent creation of Black Youth in STEM, a project for grade-school aged Black youth run by our Aboriginal Access to Engineering program.

Following the announcement of the Chair for Women in Engineering last October, funded by a generous gift from anonymous alumni, inaugural Chair Dr. Heidi Ploeg has built an online subsection of resources, tools, and opportunities for women in engineering. Concurrent with Dr. Ploeg’s work in this area, a group of Queen’s engineering students have convened the first annual Q-WASE (Queen’s Women in Applied Science and Engineering) conference, which took place at the end of February. The Faculty also remains committed to the “30 by 30” program established by Engineers Canada, with a goal of having 30 per cent of newly licensed engineers be women by the year 2030.

Smith finance professor Ryan Riordan has been named a 2021 Changemaker by the Globe and Mail’s Report on Business for his research on financing the transition to a low-carbon economy and his leadership in creating Smith’s Master of Financial Innovation and Technology. This new award program showcases 50 emerging leaders transforming business today. In his role as the Research Director for the Institute for Sustainable Finance (ISF), Dr. Riordan co-authored the Capital Mobilization Plan for a Canadian Low-Carbon Economy (CMP), a landmark research report released in September that provides a concrete, data-driven capital blueprint for Canada’s low-carbon transition. Driven by the idea that “what gets financed, gets built,” Dr. Riordan, who is associate professor and Distinguished Professor of Finance at Smith, has noted that to build the low-carbon economy of the future, we need to finance that future. He is currently working with multiple government agencies to implement the recommendations of the CMP.

On March 8, Smith School of Business publicly posted its Equity, Diversity, Inclusion and Indigenization Strategy and Action Plan for 2021 at smithqueens.com/inclusion. The strategy is the culmination of the work of many within Smith and Queen’s who contributed to its development and have been committed to supporting Smith’s EDII efforts. Producing the strategy document is not the end point – it is what drives Smith’s efforts on equity, diversity, inclusion, and Indigenization and decisions on resources. The work is challenging and vitally important, and it is driven by the efforts of many and the support of all in the Smith community.

Scholars in the Faculty of Arts and Science are looking forward to developing a new BA Minor/General in Black Studies with a target launch date of fall 2021. The Minor in Black Studies will create cohesion between existing Black studies courses offered in the Faculty of Arts and Science. These include courses related to Caribbean political economies, water politics in southern Africa, Black sound studies, African-American history, Black feminist thought, Black geographies, and more. This Minor in Black Studies has the potential to open fields of study by introducing Black Studies as an interdisciplinary minor to both Black and non-Black scholars, stimulating cross-faculty conversations and engagement.

The New Age of Art Conservation

The reality of art conservation is far more varied and increasingly high-tech these days. Thanks to a donation last spring from the Jarislowsky Foundation for the purchase of equipment and the donation of polarized light microscopy (PLM) equipment by the Isabel & Alfred Bader Fund at Bader Philanthropies, Queen’s Art Conservation is poised to be at the leading edge of research on paintings, sculpture, manuscripts, historical artifacts, and more.

The equipment was selected to provide the widest range of applications and, particularly in the case of a new Macro-X-Ray Fluorescence (XRF) scanner, to expand the scope for the field of art conservation beyond Queen’s.

As the only Macro-XRF scanner of its type in Canada and one of only a handful around the globe, this piece of equipment will open up a wide range of opportunities to collaborate and build relationships with researchers and institutions across Canada and North America.

When Netflix Comes to Town

When the Netflix production Locke & Key set up in downtown Kingston to shoot scenes for an upcoming episode, it provided an opportunity for a group of Queen’s Film and Media students to gain some valuable hands-on experience.

The arrival of Netflix is the latest win for Alex Jansen, the Kingston Film Office and Film Commissioner, who is also a lecturer and term adjunct with the Department of Film and Media. Among the courses that Jansen teaches is FILM 457/458 – Film and Media Practicum, which connects students with industry partners for experiential learning.

When Locke & Key committed to Kingston, a special opportunity arose for Queen’s students to work hands-on in a volunteer capacity outside the course.

The close connection with the Kingston Film Office has been an invaluable source of learning opportunities. During the 2019–20 course, all the students worked on Murdoch Mysteries when the CBC production shot an episode in downtown Kingston. Some also worked on Star Trek: Discovery when the science-fiction show shot at Kingston Penitentiary.

Looking ahead, Jansen says that students in the upcoming course will have the chance to work on two larger productions arriving in Kingston this year.

In the summer of 2014, Andrea Gunn, MPA’07, accepted her dream job. She had been managing the Alumni Marketing and Communications office and editing the QAR’s “Keeping in Touch” section when the magazine’s editor post became available for the first time in 28 years.

Andrea stepped behind the editor’s desk, determined to respect the traditions of this venerable publication, but contribute significantly to it at the same time. And contribute she did.

She introduced theme issues and brought a new graphic focus to the magazine, overseeing a transition that has augmented exceptional storytelling with equally impressive photos, illustrations, and graphics. She also ushered the QAR into the digital age, introducing new online content to complement each print edition. She built strong relationships and worked tirelessly to keep alumni feeling engaged and connected. Her efforts were recognized with 10 national and international awards.

Although Andrea retired at the end of 2020, her contributions will live on, and not just at the QAR. She was an engaged member of the Queen’s community, serving as president of CFRC Radio’s Board of Directors, and on the Queen’s Senate Library Committee.

Please join us in wishing Andrea all the best in her retirement.

What: Drift: Art and Dark Matter residency and exhibition project 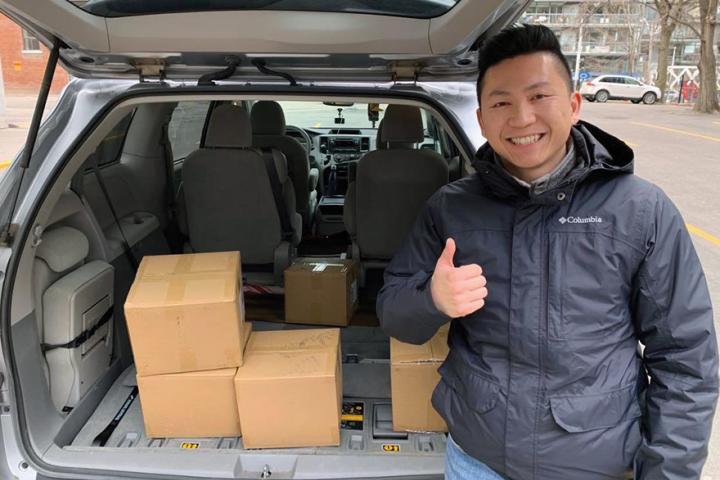 Queen's students and post-doctoral fellows are pitching in to get – and create – supplies to help protect health-care professionals from COVID-19.
View Students take action on COVID-19 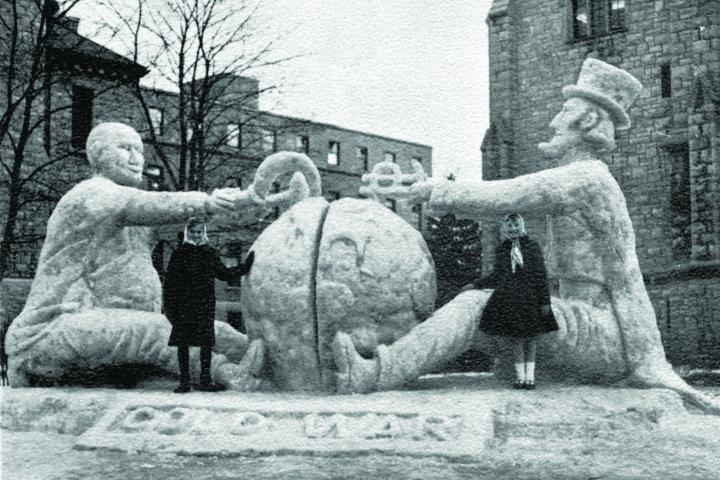 Snowball was a student-organized winter carnival at Queen’s that ran for several years in the 1960s...
View A winter flashback
Top