A Queen’s University biologist is using “ecological time machines” to decipher ancient environmental records left by the natural world in places where no human records exist. To fully understand today’s environment, says John Smol, it’s necessary to learn what that world looked like before we changed it.

“Many of the answers [in environmental science] lie in the past. You go to a doctor when you’re sick, and the first thing the doctor does is try to get your medical history,” he says.

Dr. Smol has shown that the medical history of an ecosystem exists in sediments at the bottoms of lakes, rivers, and ponds.

They preserve a large spectrum of indicators, such as fossilized, single-celled diatoms, which are algae with tough, glass-like outer shells that stay intact in sediment for thousands of years. There are thousands of species of diatoms, identifiable by their distinct shapes, much like seashells.

The key is that different types of diatoms thrive in different conditions – more or less acid in the water, for example, or different temperatures, levels of salt, and so on. Learn which diatoms lived long ago, and you can begin to understand what past conditions were like.

This ability to look back in time has put Dr. Smol into headlines around the world for tracing climate change, wildlife, pollutants, and now, with Queen’s PhD student Matthew Duda, the curious declines of huge numbers of Canada’s Atlantic seabirds.

In an age where biology is heavily focused on the molecules inside a single cell, Dr. Smol and his team still study whole ecosystems. For example, he has traced the spread of a species of smelly, brown algae in Canadian Shield lakes and the possible links to climate warming, and his team found clues as to why cottage owners don’t see crayfish anymore; acid rain damaged their lakes years ago, and though acid rain has declined, it had stripped away calcium from the lakes that crayfish need to make their shells.

Diatoms are at the heart of much of Dr. Smol’s work.

Collecting them is done by taking vertical core samples of lake sediment. Dr. Smol and Mr. Duda use an instrument called a corer to retrieve a record of mud and many indicators, including diatoms, which are preserved in layers that can be dated.

One of their current projects is investigating the suspected decline of large numbers of one of Canada’s most common seabirds, the Leach’s storm-petrel. The bird is tough to study: it lives on the open ocean and comes to land only at nesting time. It is also nocturnal.

Storm-petrels “are very abundant but they seem to be in decline everywhere,” Dr. Smol says. “But are they in decline? We have so little data. We need to reconstruct past seabird trends. The key lies in sediment cores."
Dr. Smol and Mr. Duda could see the effects of the bird’s droppings in freshwater pond sediment on the uninhabited Baccalieu Island north of St. John’s, Nfld., where storm-petrels nest by the millions. Droppings in turn influence the growth of diatoms, forming a pattern for anyone able to read it.

The storm-petrel produces very acidic guano. It both fertilizes the pond water and makes it acidic. So, for periods in the past, “when we find acid-type diatoms in large numbers and also diatoms indicating high nutrients [i.e., fertilizer], then bird populations were higher.”

Four years of work show the bird’s numbers are dropping severely, and the reason is closer to a solution. Dr. Smol developed some of his techniques decades ago, when acid rain posed a frustrating puzzle in the 1980s. Lakes were acidic and fish were dying, but nobody knew what the natural state of the lakes was. “I cut my teeth on acid rain,” he says. “You could go to Adirondack Park, where we did a lot of work, or to Algonquin Park, and the lakes were acid in the 1980s. But how do you know they weren’t always acid?” In the Adirondacks, they found the 1980s diatoms were species that live in very acidic water, but often before about 1930 there were types adapted to much less acidic water. And that helped settle the debate over whether the lakes were naturally acidic.

Dr. Smol arrived at Queen’s as a young PhD student in the fall of 1979 and now holds the post of Canada Research Chair in Environmental Change and is President of the Academy of Science, Royal Society of Canada.
He has a long list of major awards and has done many projects with his brother, Jules Blais of the University of Ottawa. The brothers were jointly the Royal Canadian Geographic Society’s environmental scientists of the year in 2008 and were awarded the NSERC Brockhouse Prize for interdisciplinary research in 2014. In 2004, Dr. Smol won the Gerhard Herzberg Canada Gold Medal, Canada’s highest award in science and engineering, given to one person a year.

“Scientists live in a different world, a charmed world. They don’t ever want to retire at 65,” he told the Ottawa Citizen a dozen years ago. He recently turned 65 and isn’t retiring.

'If there's a cure for cancer, Queen's will have a role in it.'
View Fighting a rare battle 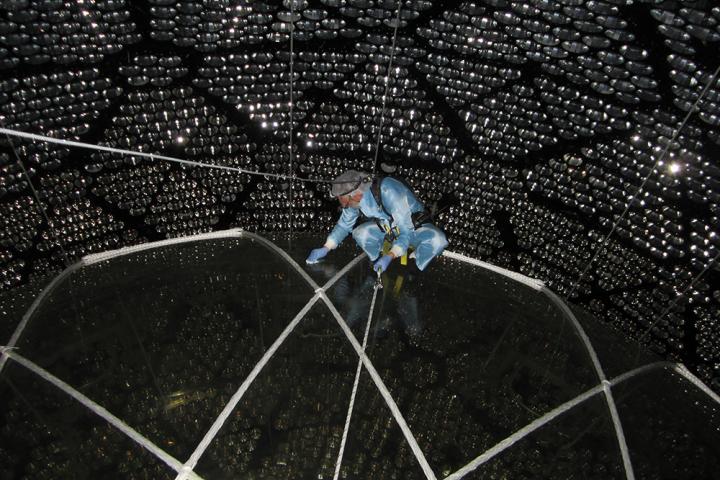 How to clean a neutrino detector

A Kingston company run by mechanical engineering grad Richard Ward, Sc’83, has played a part in...
View How to clean a neutrino detector
Top