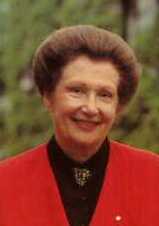 Queen's Chancellor from 1980 to 1996, Agnes Benidickson was the first woman elected to the position and also the first to follow in a parent's footsteps in holding the post.

Born in Chaffeys Locks, Ontario, she was raised in Winnipeg, the daughter of the grain merchant, financier, and Queen's Chancellor James Richardson (who served from 1929-1939).

She was educated at Queen's (BA 1941, LLD 1979) and lived in Ottawa, where her husband, the late William M. Benidickson, served as a Liberal MP for Kenora/Rainy River and as a Senator.

Benidickson devoted considerable time to public causes, beginning with work for the Canadian Red Cross during the Second World War. She was president of the Canadian Council on Social Development (1972-1974), president of the National Association of Canadian Clubs (1979-1983), and for six years served as Canadian representative of the Volunteer Committee of Art Museums of the United States and was co-chair in Canada. She was also a director of James Richardson and Sons Ltd, and for 14 years was on the Board of the National Trust and Mutual Life.

In October 2010, the Board of Trustees approved the dedication of the East Wing of Summerhill as Benidickson House in recognition of the lifetime contributions from Agnes Benidickson in support of Queen's.

See also Agnes Benidickson Field, which is named in her honour, and Richardson Family...