Mr. Church is the Vice-President & Chief Technology Officer of Cistel Technology. He began working at Cistel in 1997 as a Consultant until 2013 where he assumed his current position.  Between 1977 and 2013, Mr. Church worked in various positions such as:  Senior Systems Analyst at Algonquin College; Senior Software Specialist at Digital Equipment Corporation; Manager, Software Engineering Services at Mitel Corporation; Project Leader, Systems and Operations at Documented Circuits Inc., Consultant at Kingston Computer Services.  He held the positions of Analyst/Programmer, Supervisor Computer Systems, Head of Systems Development and Head of Transit Systems at OC Transpo and as a Consultant with Nortel. Mr. Church has extensive knowledge in real-time application, architecture and design.  He is an experienced team builder, accomplished in coordinative, supervisory and management duties in all aspects of computer support and administration. With over forty years of experience in the field, his background includes service management, management consulting and senior management. 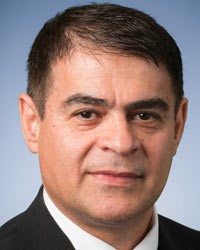 Dr.Hassan Kojori holds a PhD from the University of Toronto and is an IEEE Fellow and licensed Professional Engineer. He has over 30 years of experience in power electronics, Li-ion batteries, energy optimization and systems control for aerospace, automotive and utility. His original work on many technology firsts has resulted in 48 patent disclosures (27 granted), several trade secrets and more than 50 technical papers and proprietary reports. Currently, as a Senior Principal Engineer with Honeywell, he is the Conversion Portfolio Leader in the Aero Advanced Tech and responsible for R&D for More Electric Aircraft and tactical vehicles. He has been actively engaged in collaborative research with leading local and international universities. He was adjunct professor in the Department of Electrical and Computer Engineering (ECE) at the University of Toronto and Ryerson University (2000-2012) and an industry professor in the Institute for Automotive Research and Technology at McMaster University from 2012-2017. Currently, he is Associate Editor, IEEE Transactions on Transportation Electrification, a board member of the Advisory Council for ECE department at Ryerson University and University of Toronto Institute for Multidisciplinary Design & Innovation and represents Honeywell at The Downsview Aerospace Innovation and Research Consortium.

Dr. Praveen Jain holds a PhD from the University of Toronto and is a Fellow of the Royal Society of Canada, the Institute of Electrical and Electronic Engineers (IEEE), the Engineering Institute of Canada (EIC) and the Canadian Academy of Engineering (CAE). He is also a recipient of the 2021 IEEE Medal in Power Engineering, the 2017 IEEE Canada Electric Power Medal,  the 2011 IEEE William Newell Power Electronics Award, and the 2004 Engineering Medal of the Ontario Professional Engineers of Ontario. Dr. Praveen Jain holds a Tier 1 Canada Research Chair in Power Electronics at Queen’s University. His research contributions have resulted in over 550 publications, including 107 patents. He has received over $33M in external research funding, and is active in most major international conferences in the power electronics field. Dr. Jain's industrial experience has included work as a power electronics engineer for Canadian Aeronautics where he contributed to the design and development of high frequency power conversion equipment for the International Space Station, as an advisor for Nortel Networks and as a consultant with Astec Advanced Power Systems. He has also consulted with many organizations including Ballard Power, General Electric and Intel. In addition, he secured venture funding to establish a new company, CHiL Semiconductor, from research innovation at Queen’s University.

Dr. Alireza Bakhshai received his BSc and MSc from the Isfahan University of Technology, Iran, in 1984 and 1986, respectively, and his PhD from Concordia University in 1997. He was a postdoctoral fellow at Concordia University during 1997-8. From 1986 to 1993, and from 1998 to 2004, he served on the faculty of Electrical and Computer Engineering at Isfahan University of Technology. Dr. Bakhshai is a licensed Professional Engineer (PEng) in Ontario, and a member of the Institute of Electrical and Electronics Engineers (IEEE). He has contributed to the engineering discipline as a reviewer for both conferences and journals and has served on research committees. Dr. Bakhshai has acted as a supervisor or co-supervisor for 15 graduate students, and is currently supervising three and co-supervising one. He has published peer-reviewed papers in fields including high power electronics and applications, renewable energy conversion, and control systems. In addition, he has demonstrated his ability to apply his knowledge in an industrial context, contributing to the application of FACTS Controllers and of New Motor Drive Technologies for a Cold Rolling Mill at the Mobarakeh Steel Company, Iran, in 2001, and the design and implementation of a Unified Power Flow Controller in 2002-3.

Dr. Harrison has many years of experience in the development and evaluation of solar energy equipment. Author of numerous technical papers and patents, he is the Director of the Solar Calorimetry Laboratory at Queen's University in Kingston, ON. The laboratory supports the efforts of graduate students and post-doctoral researchers, and undertakes applied research for industry and government partners. His past experience includes 8 years as a research officer at the National Research Council of Canada, where he was involved in the development of both national and international standards for solar heating equipment. In 1999, he co-founded Enerworks Inc., (www.EnerWorks.com) a leading manufacturer of solar thermal products in North America, and in 2005, he became the Theme Leader for Solar Heating and Cooling within the Canadian Solar Buildings Research Network (www.solarbuildings.ca). The Network includes the participation of researchers at 11 universities across Canada. As a faculty member in the Department of Mechanical and Materials Engineering, he presents courses in renewable energy, heat transfer and thermodynamics. Dr. Harrison has also been the Faculty Advisor for the Queen's University Solar Vehicle Team since 1988 (now Queen's Solar Design Team) and was the Queen's Faculty Advisor for Team Ontario's award winning entry to the US DOE;2013 Solar Decathlon Competition.

Dr. Banting took on the role of Assistant Vice-Principal (Partnerships and Innovation) in 2017, taking a leading role in the integration of PARTEQ, Industry Partnerships, and Innovation Park teams as a shared service within the Vice-Principal (Research) portfolio. At that time, Dr. Banting had more than 15 years of business development experience in the life science sector. He returned to Canada to join PARTEQ in 2014 after spending seven years working at two biotech companies in the United States. In these roles, he led the due diligence and negotiation of a number of in- and out-licensing, manufacturing, platform, and co-development related collaborations. Dr. Banting graduated from Queen’s in 1993 with an honours degree in Life Sciences. He went on to earn his doctorate in pharmacology at Queen’s. His career began as a co-founder of the Queen’s spin-off company Vaxis Therapeutics.