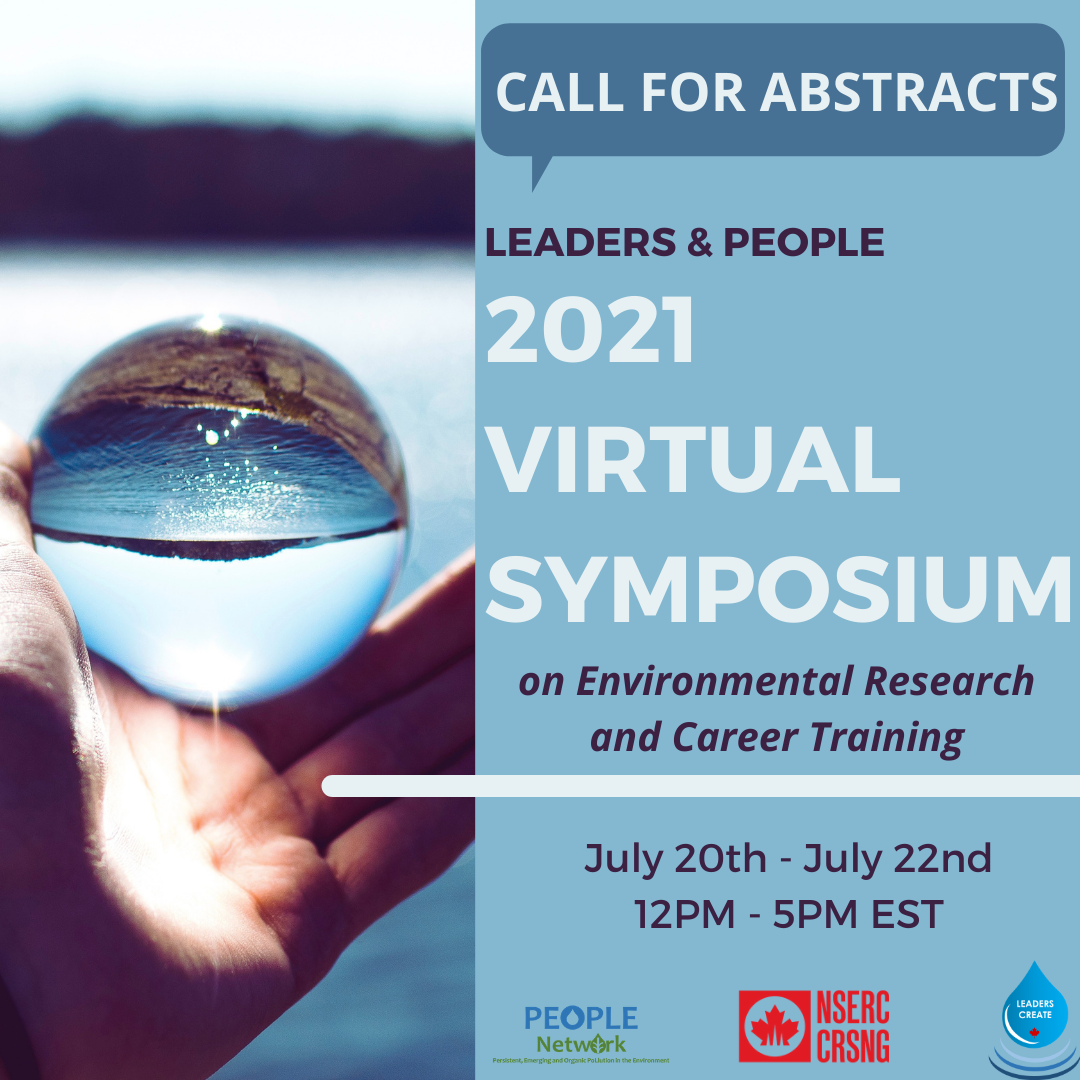 We cordially invite you to join the LEADERS & PEOPLE 2021 Virtual Symposium on Environmental Research and Career Training, July 20 - 22nd. This is a joint virtual symposium co-hosted by the Network on Persistent, Emerging, and Organic PoLlution in the Environment (PEOPLE Network) and The LEaders in wAter anD watERshed Sustainability (the LEADERS Program) for Highly Qualified Personnel (HQP) training.

This will be a good opportunity for our HQP to present their research, learn knowledge, get career advice, and enhance professional skills. The symposium will include keynote speech, HQP presentations, virtual workshops, career sessions, and a post-conference special issue in Environmental Systems Research.

If you are a LEADERS or PEOPLE funded HQP, please submit an abstract via Google Form no later than June 28th.  If you have questions about submitting your abstract, please email sf60@queensu.ca.

The symposium is free and open to the public. We encourage you to promote this in your research group and via your professional connections. 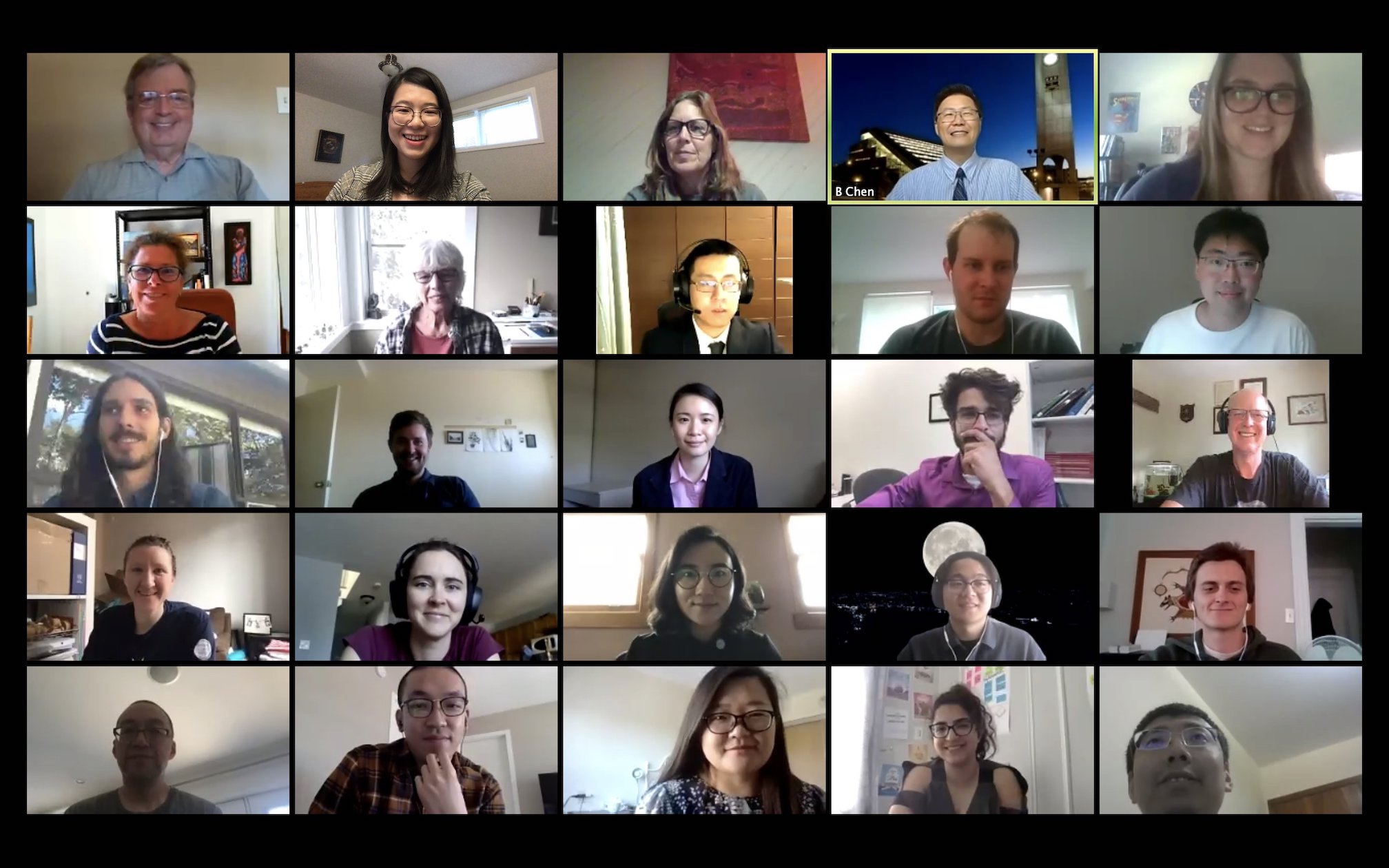 As is the new normal, the symposium was held over Zoom – a fact that Jyoti Kotecha, an Associate Director of Research & Business Development, at the Centre, felt had as many benefits as drawbacks. “Last year, this was a two-day face-to-face event with a methods skill development field trip lead by Dr Geoff Hall, Associate Director, Education and Outreach, BWRC, while this year we’re doing it virtually,” she says. “While we miss the in-person elements, we are seeing much higher attendance numbers this year, with over 90 participants on each day.”

The symposium was co-hosted by the LEaders in wAter anD watERshed Sustainability program (the LEADERS Program, led by Queen’s University) and the Network on Persistent, Emerging, and Organic PoLlution in the Environment (the PEOPLE Network, led by Memorial University) for Highly Qualified Personnel (HQP) training. Both are funded by the Collaborative Research and Training Experience (CREATE) Program of the Natural Sciences and Engineering Research Council of Canada.

The symposium was co-chaired by LEADERS program director, Stephen Brown, an Associate Professor in the School of Environmental Studies and the Department of Chemistry, Queen’s, and the PEOdPLE Network director Bing Chen, Professor & Head of the department of Civil Engineering, Memorial University of Newfoundland. The planning and the organization of the event was lead by Research Coordinators Sophie Felleiter (LEADERS) and Weiyun Lin (PEOPLE ).

“Water management is a pressing issue, and will only become more so as climate change introduces new stresses to both human and natural environments,” says Stephen Brown, the LEADERS program director. “This symposium brought together both established and young scholars, representing some of Canada’s best researchers investigating this issue both as university faculty and also as graduate students.”

The symposium examined issues arising from persistent, emerging, and organic pollutants, which pose ecological and health risks due to their persistent, toxic, carcinogenic, and/or bio-accumulative properties and associated long term ecological and health risks. Many are not regulated or legislated, mainly due to the lack of in-depth knowledge about their fate, transport, and impact, or because of a corresponding lack of effective management and mitigation options. These emerging pollutants are found in air, surface water, groundwater, ice caps, oceans, soils, and sediments, and there is increasing evidence of their toxicity at all trophic levels, highlighting an urgent need for effective management and mitigation approaches globally; a challenge in the context of climate change and important for science and policy. 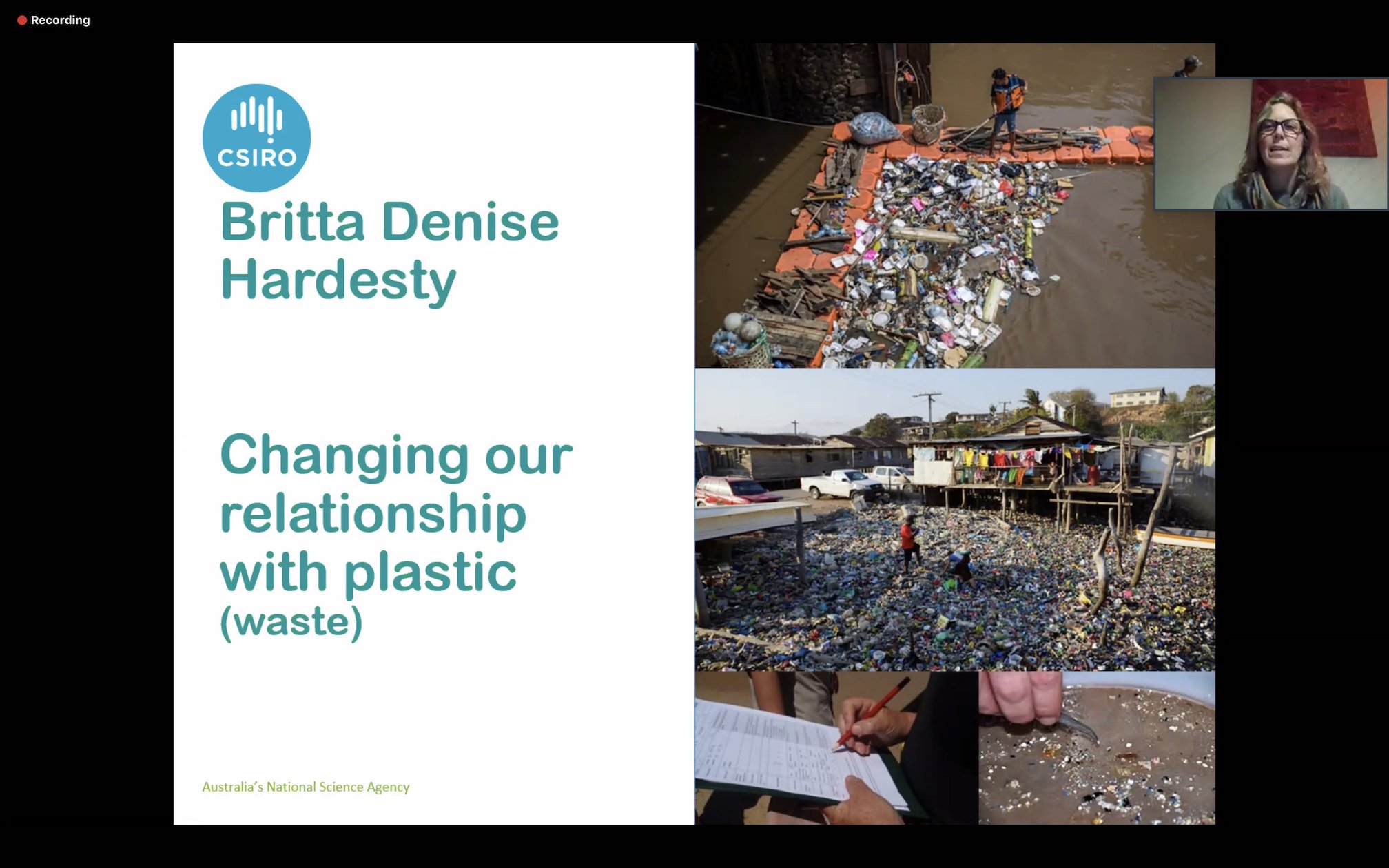 Each day featured a keynote speaker: Denise Hardesty, Principal Research Scientist, Oceans and Atmosphere, with the Commonwealth Scientific and Industrial Research Organisation (CSIRO), Australia, on the first day, speaking on "Changing our relationship with plastic (waste)"; on the second day, Corinne Schuster-Wallace, an Associate Professor at the University of Saskatchewan and the Global Water Futures group, presented "Creating Ripples". 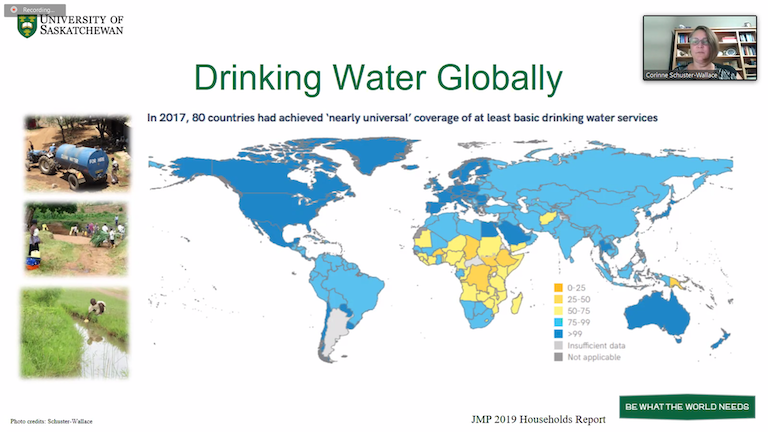 One key feature of the symposium, as Kotecha explains, is that it gave a chance for graduate students at participating institutions to shine, including Memorial University, McMaster, the University of British Columbia, Royal Military College, and more. These students – including 10 from Queen’s Engineering – gave over 30 presentations across the two-day event, divided into six streams:

Attendees were also allowed to choose between concurrent round-table discussions on the second day of the event, with two "rooms" allocated to cover a range of topics:

"The symposium was an excellent opportunity to improve vital skills in knowledge-sharing and to field questions from an audience with multidisciplinary expertise," said Eden Hataley, who presented Assessing the sorption of the cyanotoxins microcystins to microplastics at the symposium. "As a graduate student, and as a researcher, this was an invaluable experience to present my research as well as to learn from my peers and inspirational keynote speakers." 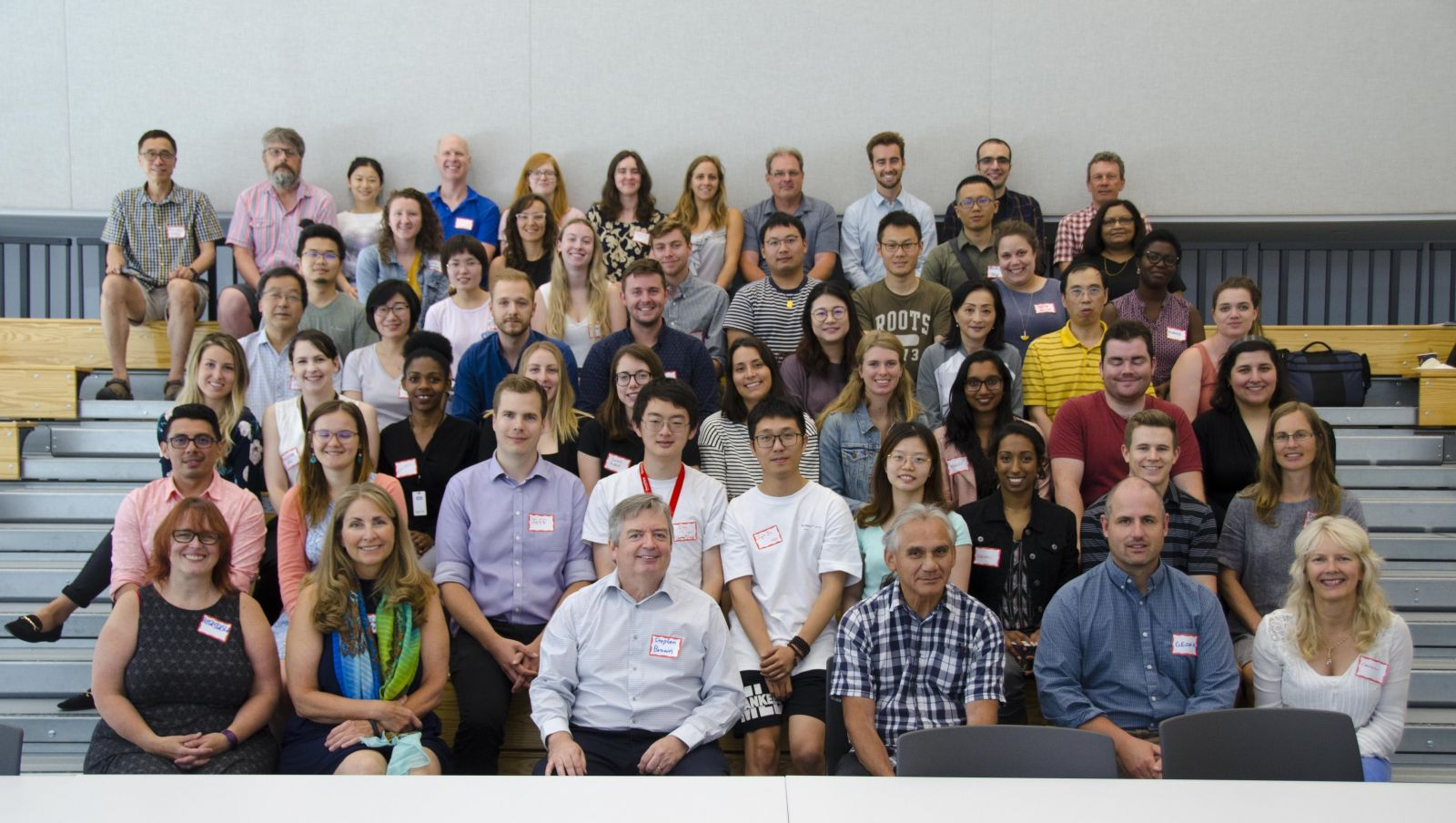 The LEaders in wAter anD watERshed Sustainability (the LEADERS) program hosted by the Beaty Water Research Centre (BWRC) is lead by Dr. Stephen Brown, Associate Professor in the Department of Chemistry & School of Environmental Studies. The program is funded ($1.65M over six years) through the NSERC Collaborative Research and Training Experience (CREATE) and was launched in 2018.

“The program will support 72 Highly Qualified Personnel (HQPs) over six years. It is currently supported by eleven researchers and fifteen stakeholders from diverse disciplines and expertise provide cutting-edge training to the next generation of water professionals.”  Said Dr. Brown.

The first cohort of Highly Qualified Personnel (HQPs) to the program were recruited earlier this year through a competitive application process and includes nine graduate students from the Departments of Civil Engineering, Biology, Environmental Studies and Geography & Planning. On July 16th-17th, these students participated in the first LEADERS research symposium and training workshop. In this year’s Symposium, students showcased their research and had the opportunity to receive feedback from leading researchers in disciplines such as engineering, chemistry, biology, policy studies, business and public health. The day after the symposium, a group of 25 students also participated in a workshops dedicated to learning field methods in ground water and surface water at the Kennedy Field Station.

This year’s symposium attracted over 60 participants and the keynote speaker was Dr. Wenwei Ren, the Water Practice Head of WWF-China and Adjunct Professor at Queen’s University and Tongji University in China. He spoke to the audience about WWF-China’s water practice strategy and its role in China’s Environmental Governance.