"A detector that works perfectly at all times would be considered either obsolete or not daring enough in conception." - Sharon Traweek 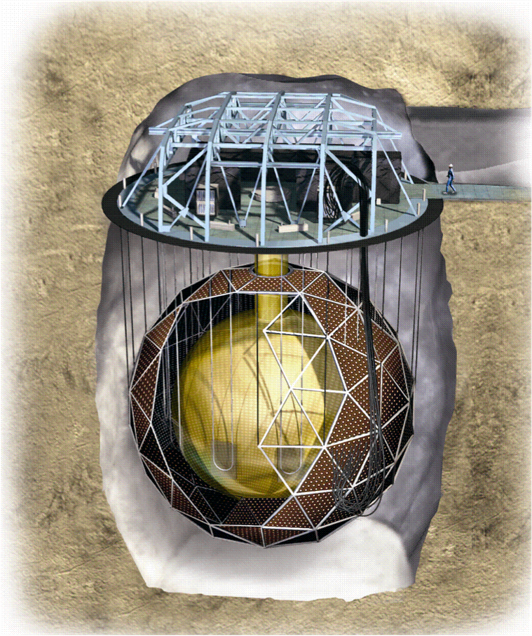 The SNO+ Experiment is a versatile neutrino detector with the primary goal of searching for neutrinoless double beta decay (0vbb). However, the high sensitivity, low backgrounds, and extreme radiopurity of the SNO+ detector allows for the experiment to have an extensive physics programme ranging from solar neutrinos to invisible nucleon decay. The SNO+ experiment is the direct successor to the Sudbury Neutrino Observatory (SNO) Experiment, which famously won the 2015 Nobel Prize in Physics for the observation of neutrino oscillations. Therefore, the SNO+ detector uses much of the same hardware as the original SNO experiment, albeit extensively modified and upgraded. The most notable upgrade is the replacement of heavy water (D2O) with liquid scintillator. This allows for a higher light yield and greatly increased sensitivity to neutrino interactions within the detector.

Cosmic rays, or the millions of high-energy particles bombarding each square meter of the planet every second, mimic the signals of neutrinos and 'drown out' the detector, making neutrino detection impossible. However, this cosmic ray 'background' can be removed by putting a lot of 'stuff' that can absorb cosmic rays between the detector and space. In the case of SNO+, the 'stuff' we use is 2km of Canadian Shield. The SNO+ detector is situated underground at the SNOLAB research facility. Originally built to house the SNO experiment, SNOLAB has since expanded to be one of the deepest and cleanest underground research facilities in the world, housing several world-class neutrino and dark matter experiments.

SNOLAB is located near Sudbury (Ontario) in Creighton Mine, an active nickel and copper mine run by the Vale mining corporation.

The main detector is a 6m radius acrylic vessel (AV), is filled with 780 tonnes of linear alkylbenzene, our liquid scintillator following a major upgrade. Neutrino interactions within the AV are viewed by ~9300 photomultiplier tubes (PMTs), which are mounted on a steel PMT SUPport structure (PSUP) outside of the AV. This steel structure is located in a ~20m tall cavity dug into the rock 2km underground at SNOLAB (in the Creighton Mine). The cavity is filled with ultra-pure water to reduce undesirable background events from trace amounts of uranium and thorium in the surrounding rock. 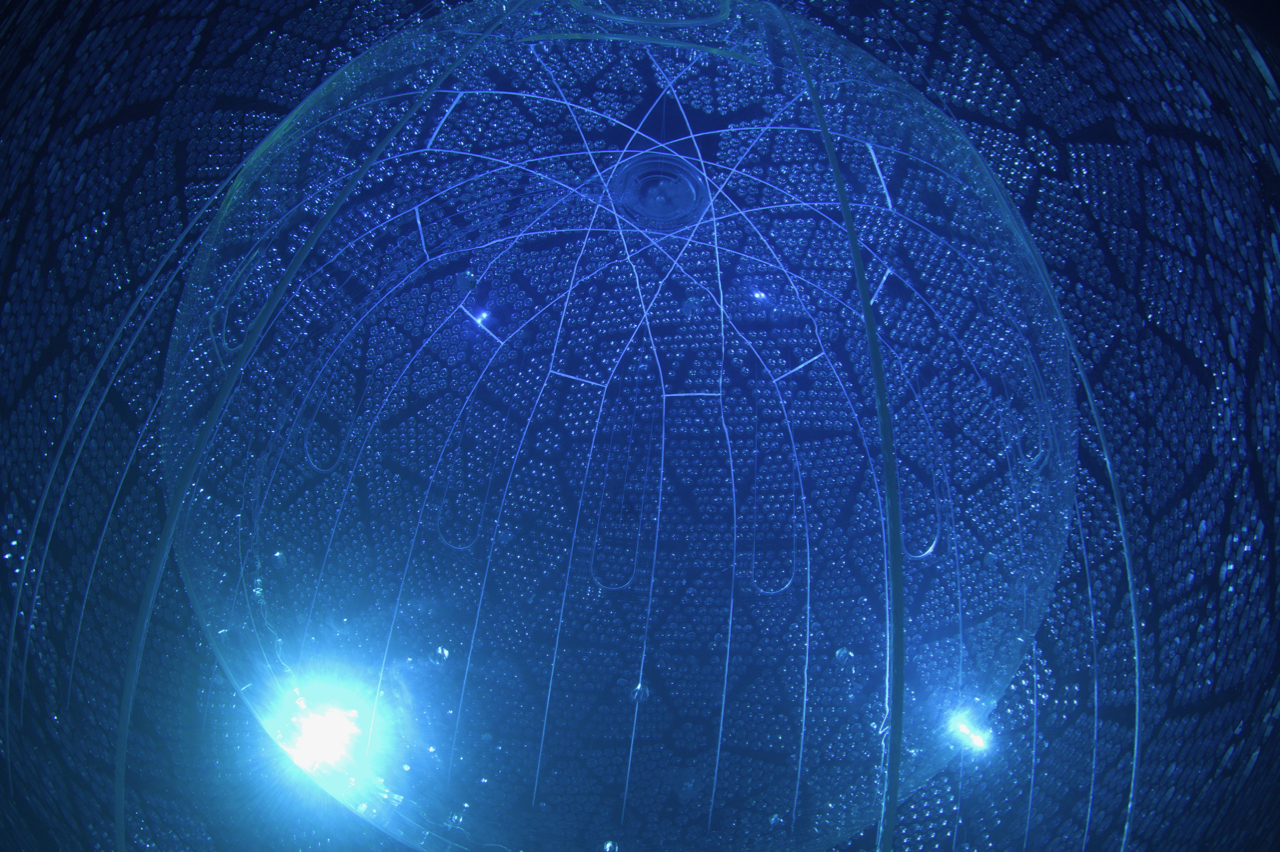 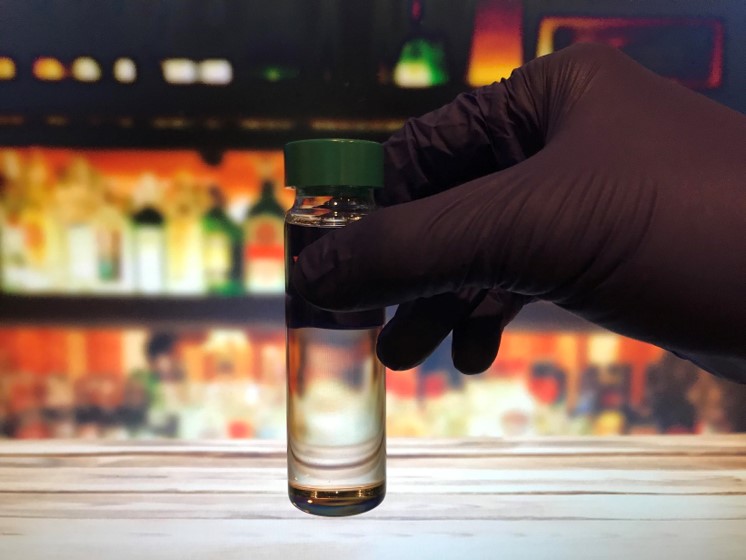 The ultimate goal of SNO+ is the search for 0vbb. In order to do this, the liquid scintillator will be loaded with ~1300kg of Te-130, an isotope known to undergo double beta decay. Electrons emitted from the double beta decay will be produce light in the liquid scintillator which will be observed with our PMTs, and the total energy measured to see if any of the decays were neutrinoless. Double beta decays are very rare, so the immense quantity of isotope loaded into SNO+ gives a significant advantage over other 0vbb experiments.

The usage of liquid scintillator will allow for a lower energy threshold in SNO+ than in the original Sudbury Neutrino Observatory. SNO+ will be sensitive to pep and CNO neutrinos produced in the Sun. The production rate of pep neutrinos in the Sun is extremely well known, so a measurement of the pep neutrino flux at the Earth will show the "survival probability" of the original neutrino flavour and test neutrino oscillation models. Meanwhile, a measurement of the CNO flux will give insight into the "solar metallicity problem", an unresolved issue regarding the metal content in the core of the Sun.

SNO+ is able to detect antineutrinos through an inverse beta decay interaction that can occur in the liquid scintillator. Antineutrinos are created from radioactive materials in the crust and mantle of the Earth (geoneutrinos), as well as in nuclear reactors. A measurement of geoneutrinos will give insight into two properties of the Earth that are not well understood: the heating mechanism of the Earth, and test models of the bulk composition of the Earth's mantle and crust. Near SNO+ are nuclear power plants in Ontario. As the neutrino production from nuclear reactors and their distances from SNO+ are very well known, this will allow for extremely precise neutrino oscillation measurements. 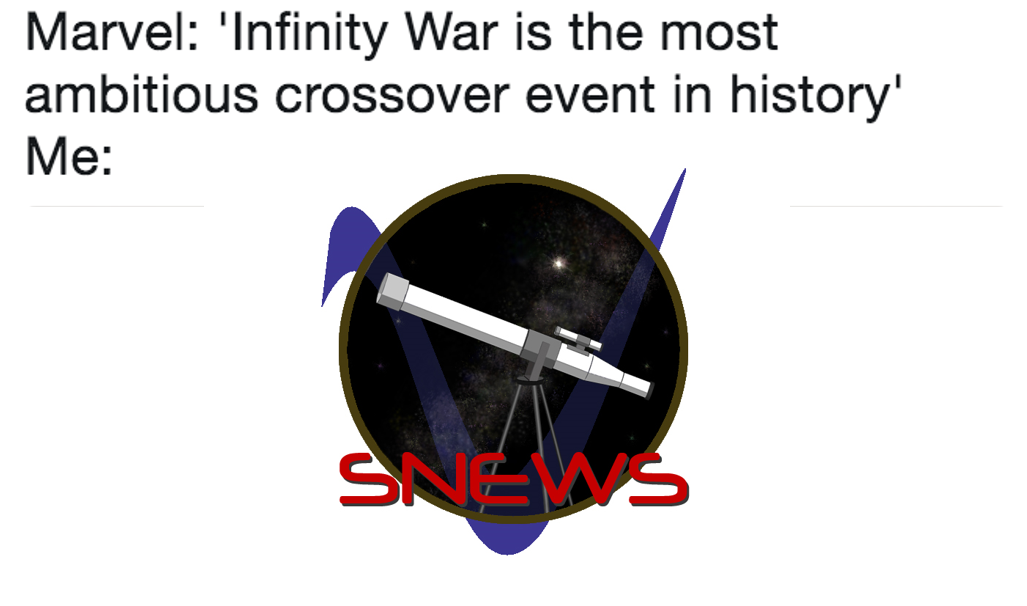 When the outward pressure due to fusion reactions in the core of a dying star is not enough to overcome the force of gravity from the outer envelope of the star, the envelope comes crashing into the core in what is known as a supernova.  Over 99% of the energy of a supernova is released in the form of neutrinos. Furthermore, while the photons from the explosion are jumbled in the collapsing envelope, the neutrinos are expelled mostly unphased. Therefore, the neutrinos are not only the most representative signal of a supernova, but can act as a warning to astronomers of an imminent supernova. SNO+ will be a member of the Supernova Early Warning System (SNEWS), which is a collaborative effort between 8 neutrino experiments to detect supernovae in advance of their light signals.

The extremely low-background conditions, high sensitivity, and low energy threshold of the SNO+ experiment allows for the detection capabilities of other Beyond-Standard-Model physics. This includes the search for invisible nucleon decay (decays of nucleons into modes where daughter products deposit no energy in the detector), and axion-like particles (hypothetical particles that can solve issues such as the Strong CP problem).

Previous page: Neutrino Physics
Back to About Us