Other Englishes: The Case of Bislama

As a topic of inquiry, there are many aspects of Canadian English that one could consider: grammar, spelling, language policy, historical change, regional variation, literary styles, and so forth. In addition, one could consider how Canadian English relates to other varieties of English around the globe. After weeks of studying different topics related to English in Canada in the undergraduate Canadian English course at Queen's, students are always eager to learn how, and why, the English in Canada differs from the English spoken in other parts of the world. It is in this vein that I offer the following brief introduction to another variety of English -- Bislama. Bislama is the national language of Vanuatu, a small island nation in the South Pacific, where I recently returned from a month of fieldwork.

Bislama is not a dialect of English but rather a separate language. Bislama is, however, an English lexifier-creole, which means that much of its vocabulary came from English (thus an English-lexifier) but that structurally it began as a blend of several languages (thus a creole). Although they differ from one another a great deal, in the very broadly defined group of global Englishes, Bislama and Canadian English are both members.

The origins of Bislama were in the late 1800s when Ni-Vanuatu (indigenous people of Vanuatu) were taken as slaves or as recruits to work on plantations in Australia and other Pacific countries. The Ni-Vanuatu spoke many different native languages, and in order to communicate with each other and the English-speaking plantation owners, a pidgin was formed. The pidgin relied heavily on English vocabulary, but the grammar (both the sentence structure and the sound patterning) was based on that of the native Melanesian languages of the speakers. The pidgin spread throughout Vanuatu when the workers returned home, and it became a creole when children, mostly in urban areas, began speaking the pidgin as a native language. Bislama is currently a second language for the majority of Ni-Vanuatu and the most widely spoken language in the country, where it is serves as a lingua franca in the midst of over 100 indigenous languages and two other official languages (English and French).

Bislama and English are not mutually intelligible. Even just in terms of vocabulary, words that originate from English may have a different pronunciation (Bislama "manis" is from English "month"); a different morphology (in Bislama, "samting" means "thing"; to give the meaning of English "something" in Bislama, you say "wan samting" [one + something]); or have semantically shifted (in Bislama "swim" means "to bathe"); or changed their grammatical function ("off" and "on" are verbs in Bislama with the addition of the suffix "-em", so "turn on the light" in English is "on-em laet" in Bislama ).

I have been traveling to Vanuatu since 2004 to study several of the local languages (most recently Na'ahai, spoken by less than 1000 people on the isolated southwest coast of the island of Malakula). I just returned from a month in the country's capital Port Vila, where the predominant language is Bislama. To give you a sense of Bislama and an opportunity to consider how it compares to the English that you speak, I have collected images of some simple signs in Bislama (below and by following the link) and provided English translations. 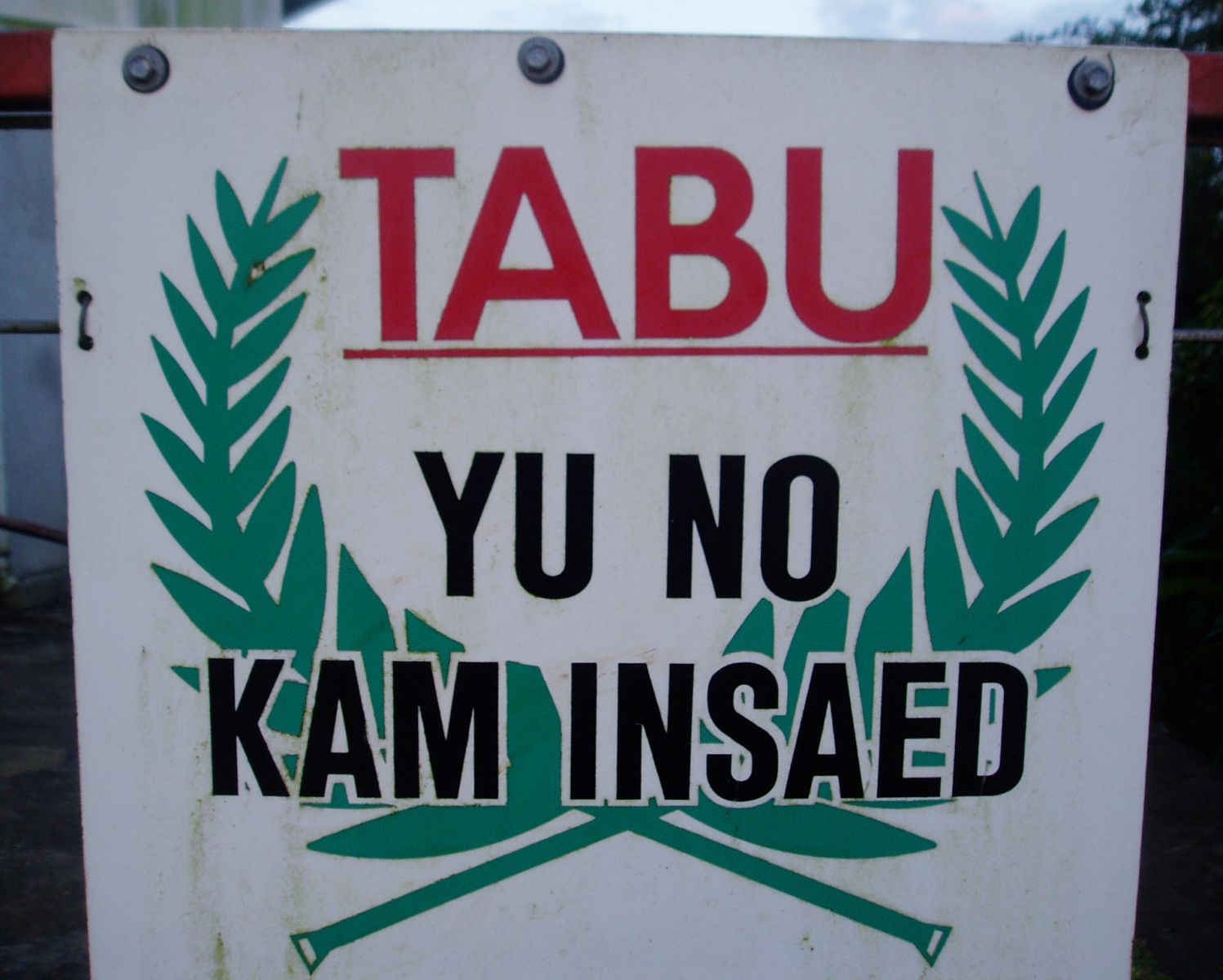 Tabu Yu no kam insaed
forbidden you no come inside

We stand together with God 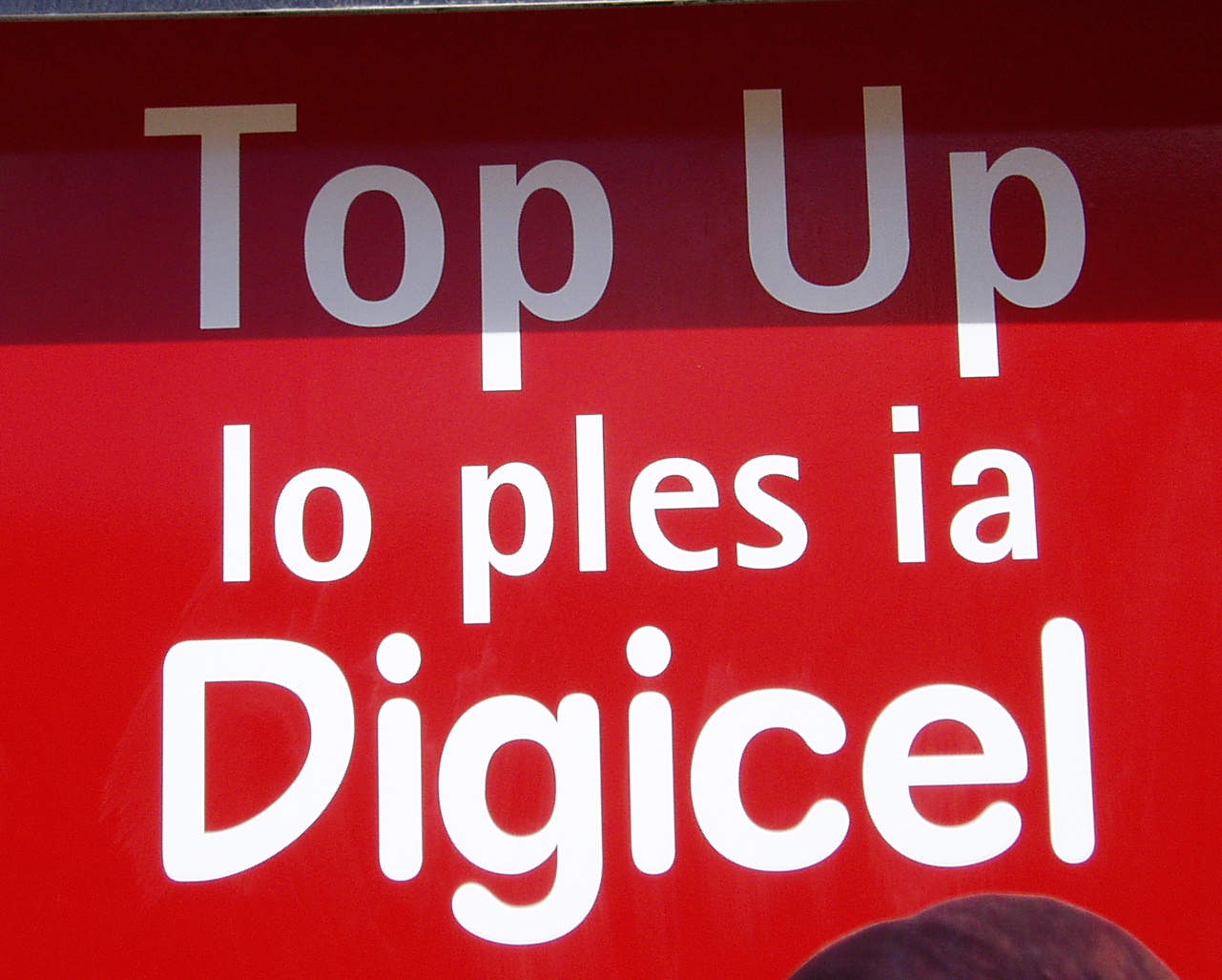 This is an advertisement from the cell phone company Digicel. The understanding is that the "top up" refers to usage minutes.

This is your hospital. Please take care of it and keep it clean.

Hospital ia emi blong yu.
hospital this it-is of you

Bia blong yumi
beer of we

Crowley, Terry. 1990. Beach-la-Mar to Bislama: The Emergence of a National Language in Vanuatu. Oxford: Clarendon Press.

Crowley, Terry. 2003. A New Bislama Dictionary (2nd Edition). Suva, Fiji: Institute of Pacific Studies and the Pacific Languages Unit at the University of the South Pacific.

The photograph of Lukaot! Dog i save kakai man was taken in Luganville in 2004. All others were taken in Port Vila in 2011. All photographs by Anastasia Riehl.