News about the Strathy Language Unit and Canadian English studies

[Please note that this page is an archive of blog posts from 2013. Some of the links to articles are no longer active.]

Canadians love their pencil crayons and freezies! Several recent articles highlight terms particular to Canadian English, based on the results of an informal survey for GeekMom blog. Click here to read a version of the article published in the National Post. [no longer available]

Young urban Canadians appear to be losing "eh" in favour of "right", according to new research by Sali Tagliamonte. Read more about the trend in this article from the Ottawa Citizen. [no longer available]

On TVO's The Agenda earlier this week, host Steve Paikin led a guest panel in a discussion about speaking English with a non-native accent in Canada. Click here to watch the full episode. [no longer available]

Here are a couple of additional fall media stories with a Canadian English element. Sarah Barmak explores the return of the Mary Maxim sweater in the Toronto Star and Mark Abley ponders the patterns of phrase-initial "So..." in The Gazette. [no longer available]

The latest contribution to Strathy Student Working Papers on Canadian English is now available on QSpace. In "Didja know? A comparative study of affrication across word boundaries in Canadian and American English", authors Carol Little and Thea Knowles examine the rate of affrication of word-final coronal stops /t,d/ when preceding a word-initial /j/. Do Canadian English speakers affricate more or less than American English speakers? Read the article to find out! 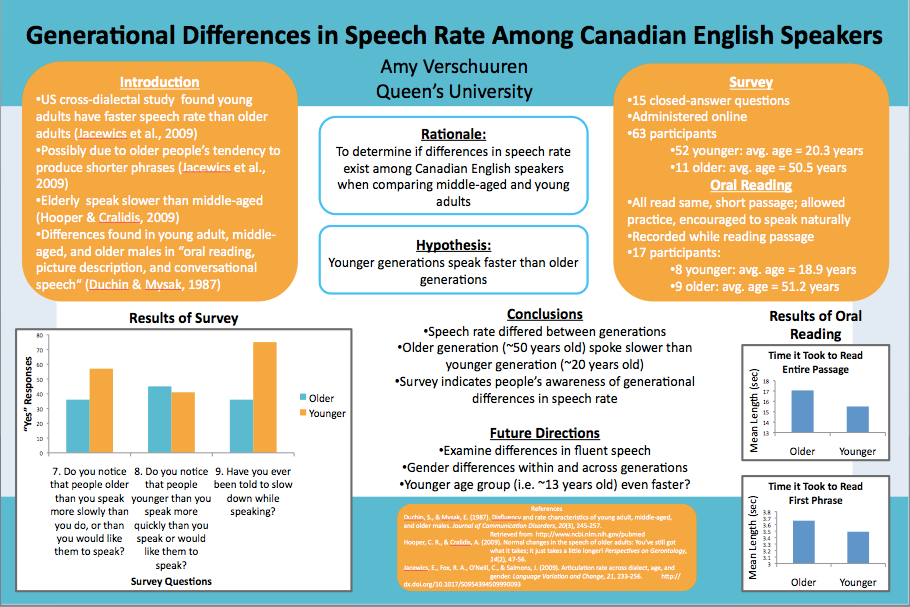 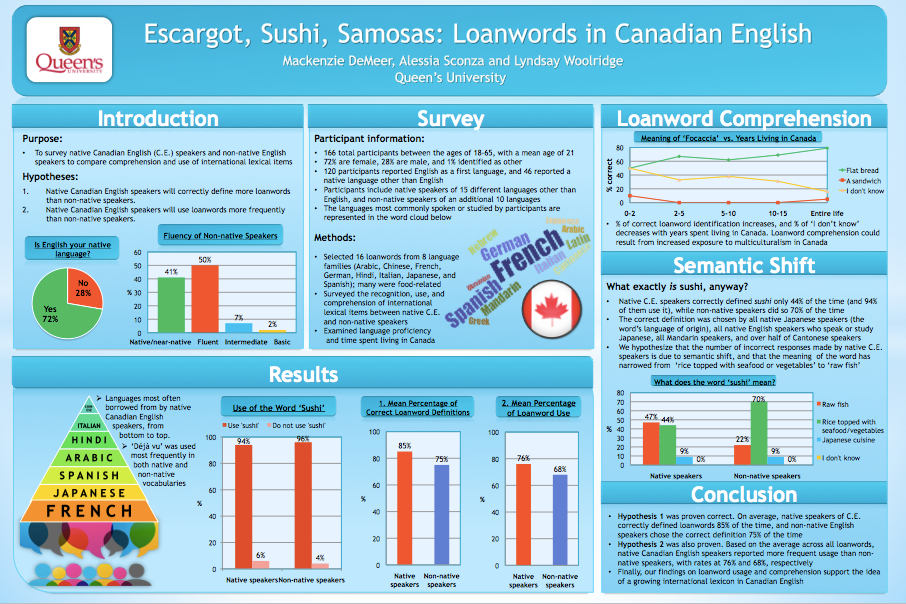 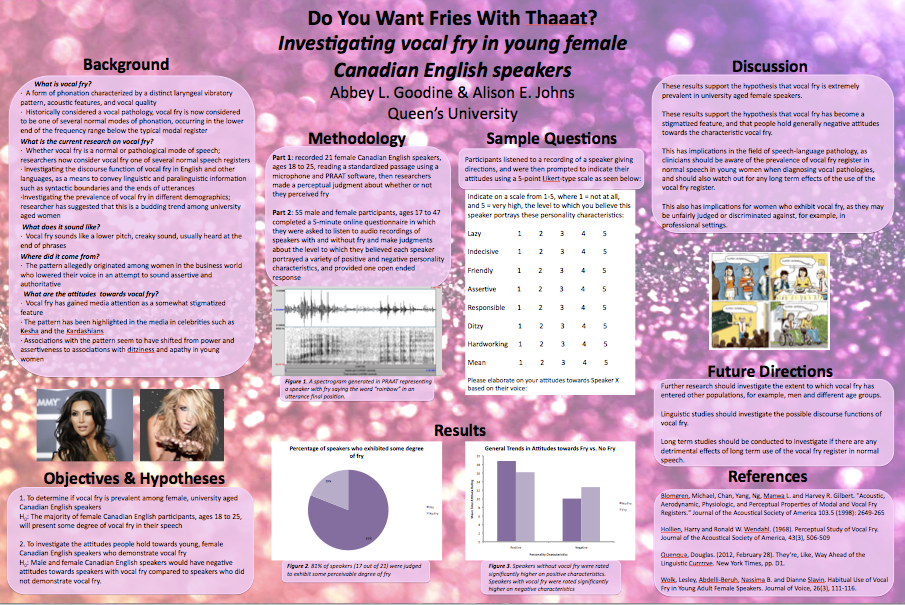 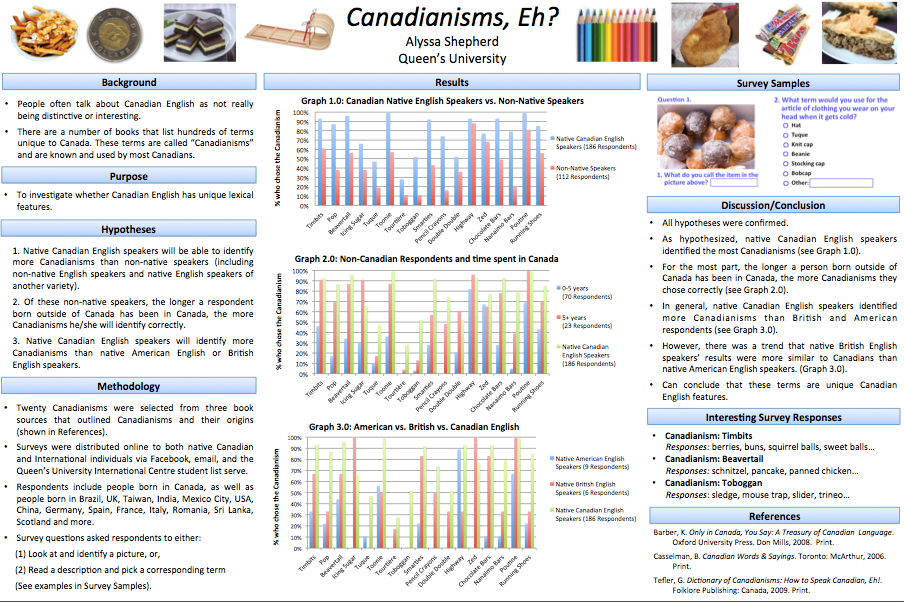 Michael Enright shares his thoughts on the usage of "like" amongst teenagers on CBC's The Sunday Edition last week. Read or listen to his essay here. [no longer available]

Strathy Director Anastasia Riehl and Brian MacDonald of the Wolfe Island Historical Society presented their project "Oral Stories of Wolfe Island" today at Queen's Community Breakfast. The aim of the project is to build a corpus of audio recordings and transcriptions of Wolfe Islanders telling their personal histories. The corpus will be used to study language and local history as well as to create an archive for the Historical Society.

Dialect Atlas of Newfoundland and Labrador

Memorial University has released its new interactive online Dialect Atlas of Newfoundland and Labrador. The site is an incredibly rich resource on lexical and grammatical variation in the province. It also includes information on the history of the dialects, links to other sources and even activities.

125 Years of English at Queen's

The Department of English at Queen's University celebrates its 125th anniversary this year. The milestone is honoured in an exhibit at Special Collections that includes materials from the Strathy Unit. You can view a digital version in the Collection's first virtual exhibit.

New Ways of Analyzing Variation 42 will be held at the University of Pittsburgh October 17-20. The program includes many presentations on variation in English dialects, including Canadian English. View the schedule and abstracts here. [conference website no longer available]

Change and Variation in Canada Workshop

We are happy to announce that the Strathy Language Unit will host the 8th annual Change and Variation in Canada Workshop at Queen's University May 31-June 1, 2014. Check the blog for details in the coming months!

Last month, Oxford English Dictionary administrators held a symposium to discuss the evolution of English into an international language. Stefan Dollinger, a Canadian English scholar at the University of British Columbia and editor of Dictionary of Canadianisms on Historical Principles, was invited to provide input. You can read a bit about the meeting in the following articles:

Oxford English Dictionary experts mull what gets in what stays in 'boondocks'
http://www.vancouversun.com/life/Oxford+English+Dictionary+experts+mull+what+gets+
what+stays+boondocks/8786794/story.html [no longer available]

What other summer media stories did we miss while the blog was on hiatus? Send us an email and let us know!

We will not be posting any new material on the blog during July and August but will return in September with more news, media stories and unit updates!

On yesterday's episode of CBC's The Current, host Anna Tremonte tackled the "apostrophe catastrophe". Does English need the apostrophe, or is it a confusing and unnecessary punctuation mark better forgotten? Several experts weigh in, including a member of the Editor's Association Canada. Read a summary of the episode and listen to the full audio here: http://www.cbc.ca/thecurrent/episode/2013/06/17/the-apostrophe-catastrophe/. [no longer available]

New research by University of Toronto linguist Sali Tagliamonte on the grammar of teenagers' text messages is highlighted in a recent article in the Toronto Star:

English at the Border

Jack Chambers will present "Sleeping with the elephant: English at the Canada-US border" at a gathering of FLAUT (Friends of Linguistics at the University of Toronto) on May 30th at 7:00 PM in the linguistics lounge in Sydney Smith Hall.

Dave Bidini wrote "a column only Canadians will understand" for the National Post. Is this your Canadian English?

Change and Variation in Canada Workshop

The 7th annual Change and Variation in Canada workshop will be held at the University of Toronto on May 4th and 5th. The program includes many talks on Canadian English covering a range of interesting topics. [conference website no longer available]

Frustrated when your American spell checker rejects your Canadian spellings? So is this student writer in SAIT's The Weal:

Jian Ghomeshi talks about the recent addition of "bluenoser" (a native or inhabitant of Nova Scotia) to the Oxford English Dictionary and about other regional Canadianisms, in the opening segment of Monday's Q. You can listen to the segment here: http://www.cbc.ca/q/episodes/. [no longer available]

The following article from The Week highlights a few interesting Canadianisms in honour of the DCHP's new online presence (see two entries below).

The first edition of the Dictionary of Canadianisms on Historical Principles is now online. Published in 1967, this historical work documents the changing meanings of words over time. You can access the DCHP here: http://www.dchp.ca/dchp2/.

The Huffington Post put up a slideshow today highlighting a few Canadianisms - familiar spelling issues and lexical items. Check it out here: http://www.huffingtonpost.ca/2013/03/11/canadian-english-differen_n_2853947.html.

The evolution of English in Toronto is an ongoing project of University of Toronto linguist Sali Tagliamonte. Her research is being highlighted in the media today, as in the following article from the Toronto Star:

Like whatever, eh? U of T prof tracks evolution of Canadian English across generations
http://www.thestar.com/news/gta/2013/03/07/like_whatever_eh_u_of_t_prof_tracks_
evolution_of_canadian_english_across_generations.html

The Canadian Museum of Civilization will revert to using BC ("before Christ") and AD ("anno Domini -- Latin for "in the year of the Lord") when describing dates, abandoning use of BCE ("before the common era") and CE ("common era"). The issue is covered in this article from the National Post:

The Strathy Unit is pleased to offer conference grants and research grants again this year to Queen's students pursuing work on Canadian English. Applications are welcome from both undergraduate and graduate students!

The Montreal Gazette's Frenglish site has been updated to include an interactive map of French and English speakers in the city, a Montreal dictionary, new articles and other features. Click here to visit the homepage. [no longer available]

Talk at U Vic

The following talk may be of interest to Strathy Blog readers:

Canadian eh? from a cross-linguistics perspective: Towards a formal typology of confirmationals
Martina Wiltschko (UBC) and Strang Burton (Stó:lō Nation)

Click here to visit the University of Victoria Department of Linguistics seminars page.

The latest article in the Strathy Student Working Papers on Canadian English is now available on QSpace. Tara Glickman's paper "Past tense formation with irregular lexical verbs in Canadian English" explores the variation in past tense for a set of verbs including dreamed/dreamt, learned/learnt and spilled/spilt.

Jack Chambers was interviewed about the Great Vowel Shift on CBC's Sunday Edition. Towards the end of the interview, he mentions Canadian Raising. [no longer available]

As language changes, some words shift in meaning or form. In the following two articles, writer Mark Abley discusses aspects of change (and those who resist it!) in the case of several words in Canadian English:

A British immigrant to British Columbia reflects on the "hybrid" nature of his English after five years in Canada:

The Strathy Corpus of Canadian English is now online! Over the past few months, we have been working with Mark Davies of Brigham Young University to create a searchable online version of our corpus. It is now available on Davies' corpus website which also hosts the Corpus of Contemporary American English and the British National Corpus, among others. We are excited to bring the corpus to a new and larger audience and to help facilitate research on Canadian English. Please check out the corpus and send us your feedback!

[Editor's Note: Kaela Starkman is a master's student in the Department of English at Queen?s. She did an internship at the Strathy Unit during the fall 2012 term. The focus of the internship was to begin to create a database of samples of Canadian English dialogue in fiction. We hope that the database will ultimately be used to study how Canadian dialects are represented in literature. Below, Kaela describes her work.]

Throughout my internship I both read and recorded instances of idiomatic Canadian English and dialectical idiosyncrasies in twentieth and twenty-first century Canadian prose fiction. My internship began as a double negotiation, as I sifted through the Canadian literary canon in order to decide which books to read, while simultaneously attempting to arbitrate what I believed to be instances of dialectical idiosyncrasies within those books. Although I started my search by focusing on First Nations literature such as Robert Arthur Alexie's Porcupines and China Dolls and Drew Haydon Taylor's Motorcycles & Sweetgrass, my focus quickly shifted to the Maritimes, the constant throughout being a focus on dialogue.

As the Maritime provinces are known for their various regional dialects, easily lending themselves to this type of work, I decided that Maritime literature would make a good jumping-off point for my search. Finding precedent for my project in Professor George "Tony" Tilly's (1980) doctorate thesis, Canadian English in the Novels of the 1970s, I began to categorize the dialogue I had recorded under four broad headings including: Urban/Rural, Generational, Social Class, and Ethnicity. Although the divisions were subject to my discretion and thus subjective and provisional, I found it useful to provide a basic outline of what the dialectical variations both reflected about the characters and demonstrated to the reader. Having decided to focus on fiction hailing from Prince Edward Island, Nova Scotia, Newfoundland & Labrador, and New Brunswick, I was faced with the task of acquiring a large sample of work not only written by Maritime authors, but also set in the Maritime provinces. As I had relatively little knowledge of this aspect of Canadian literature before beginning my internship, this proved to be one of the most rewarding aspects of my placement. I began my search with an online tutorial, courtesy of the Halifax Public Libraries system, which provided a detailed overview of classic Maritime authors from Nova Scotia (Hugh MacLennan, Frank Parker Day, Evelyn Richardson and Will R. Bird), as well as contemporary favorites and up and coming writers from across the Maritimes (Ann-Marie MacDonald, Lucy Maud Montgomery, Lynn Coady, and Wayne Curtis). As I combined this resource with a printout of both the nominees and winners of Atlantic Book Awards dating back to 2007, I ensured that I had a representative sample of writers across all the desired Eastern provinces.

As I came into my Master's degree hoping to focus on Canadian literature in preparation for my Doctoral dissertation, this internship provided me with a breadth of knowledge that I believe will be invaluable to my future studies. After being exposed to such a wonderful wealth of contemporary Maritime literature, I now plan to focus on this region as I continue my graduate studies.

Be Sk(c)eptical about Canadian Spelling

The ever popular topic of Canadian English spelling is explored in this piece from Troy Media: