Hidden Profanity: Language and Identity in the First World War

[Editor's note: This piece is the second instalment in our series Words of War: Canadian English in the First World War.]

The significance of profanity in the First World War relates to the role it played in forming soldiers' identities. Historian Tim Cook writes, “Swearing and slang reveal new ways to better understand the social and cultural history of civilian soldiers, how they made sense of the war, how they distinguished themselves from civilians, and how they unified aspects of their identity.”1 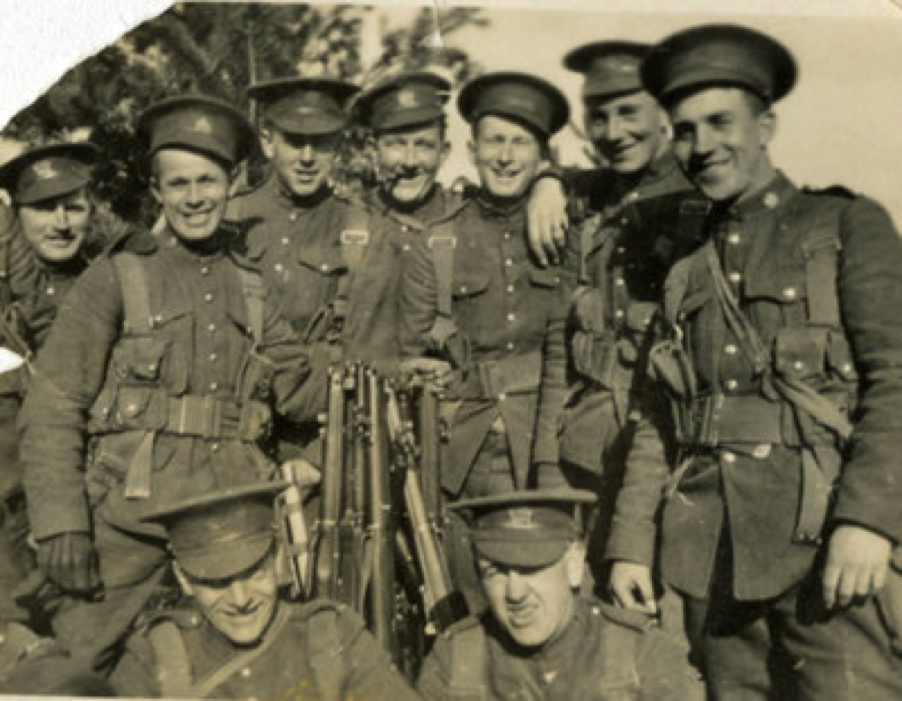 There were two types of profanity that emerged at this time: euphemisms and explicit profanity. Examples of euphemisms include Tom-tit, Jane Shore, four letter man, and NBG. To civilians, these terms did not have any meaning, but in the trenches, these words were widely used and known by all. Tom-tit was another word for sh*t; Jane Shore was used to describe a promiscuous woman; four letter man was a man who was of bad character; and NBG meant no bloody good. These terms emerged as a way for soldiers to describe how they were feeling without having to be as graphic or vulgar in their speech. This was also a way for them to disguise what they were saying from other troops outside the Canadian forces.

Explicit profanity accounts for a large portion of the extensive list of slang terms used by the Canadian battalions. Swear words such as f*ck, sh*t, and bloody were most commonly used, and they had many different functions. Cook writes, "f*ck was used as a noun, verb, adjective, and adverb, and possibly in other ways. It was employed to give urgency to any action. One did not 'come to attention' but 'come to f*cking attention'.”2 These common phrases were also sometimes replaced with euphemisms, for example, Sweet Fanny Adams was used as a way to say f*ck all. Although they did not openly swear outside the military, the use of profanity by soldiers did contribute to words such as f*ck becoming more popular in the general population after the war.

Swearing was habitual for soldiers, as the isolation meant that there was no one around to stop them from speaking in this manner. They swore in every instance imaginable, whether it be during quiet moments in the trenches or during an intense battle. Cook writes, “swearing seems to be a badge of pride, but also a means to distance the soldier from the civilian.”3 Swearing became a coping mechanism for soldiers and was a way for them to make sense of their experiences within the war. Swearing was not exclusive to soldiers, but it was used more frequently in the trenches than it was elsewhere in society, which created a distinction between civilian life and the soldier experience.

Looking through trench newspapers, it is evident that soldiers did not flaunt the use of these terms to those outside of their battalion, and therefore these terms are difficult to find. In The Soldiers' Press: Trench Journals in the First World War, Graham Seal writes, “serious swearing belonged to the discourse of trench oral culture and not the more slightly rarefied form of the trench journal.”4 Soldiers did not want to taint their reputation with those waiting for them on the homefront, where the obscenities and vulgarities would not be acceptable in everyday language. As a result, the vulgar language was not expressed in journals, letters, or other publications and was only used in conversation.

In a way, the trenches became a linguistic free-for-all for soldiers, where they could speak in any way they desired. At home, this language would have been considered disrespectful, especially in front of women, but because there were few women involved in their daily activities during the war, the men did not feel as though they needed to censor themselves, and they expressed their masculinity with their vulgar language.

Many soldiers were enlisted at the young age of eighteen or nineteen, and the culture of war changed the way in which they spoke and acted. Historians describe this culture as the ‘cult of virility’. In “Fighting words: Canadian soldiers’ slang and swearing in the Great War,” Cook cites historian John Lynch who said that young soldiers "wanted to impress the world with their toughness. We cursed louder, drank harder and behaved in a very boisterous manner, putting on a front for the veterans of the outfit, many of whom were older than our fathers".5 As impressionable young men, they looked up to those above them as role models in speech, behaviour, and actions. They overcompensated in the way that they spoke, as a way to present their manliness, using profanity more often than the typical nineteen-year-old boy at home. The older soldiers usually refrained from participating in this language as they were in higher positions of power. As superiors and role models, they felt a need to censor themselves in order to gain the respect of their team. However, as the army was made up of a majority of young men, the use of profanity was widespread.

Although soldiers did not openly admit to their excessive profanity use, the songs that they sang within the trenches tended to include swearing. The image of song lyrics above shows some of these terms, such as arse and f*ck. This song illustrates how frequent the use of profanity was, as most lines contain some type of profanity.

A clergyman and soldier of the First World War, Tom Johnson, wrote, “The Canadian is conscious that he is inventing phrases which are his own, so he has pride in his own language. Perhaps this is a superficial distinction, but in warfare it is one which seems essential to success. This originality tends to make him a more dangerous opponent.”6 The soldiers took pride in the fact that they were creating something that only they understood. Speaking in this way, without rules or censorship, was also a way for them to experience fun and freedom in one aspect of their lives, as they were not given agency in others.