The ties that bind

Jean Tucker-Galipeau doesn’t consider herself a trailblazer at Queen’s. But she most certainly was – especially for her granddaughter, Michelle, who will graduate this fall, 80 years after Jean did so at the top of her class in 1941.

When Michelle Blumberg accepts her MSc in cognitive neuroscience at Queen’s this autumn, her “Grammy,” Jean Tucker-Galipeau, will be cheering her on.

And no doubt reminiscing about her own graduation, an incredible 80 years before.

Jean, who turned 102 this year, is a member of Arts’41, one of just a handful of women to graduate that year in mathematics and physics. She still has her yearbook, along with a shelf full of the math books she was awarded for having the top marks in her class.

“She’s an inspiration to everyone in the family,” says Michelle, 24. “That she was one of the first women to graduate in math and physics from Queen’s is something that I’ve always been very proud of. I tell my friends about her all the time.”

Red, gold and blue runs in the family’s veins. Jean’s father, Robert James Tucker, graduated in Medicine in 1916. Her cousins were professors.

The family tradition was an important part of Michelle’s decision to come to Queen’s, first for a BSc in life science, and then continuing on for her master’s.

“I’m very proud,” Michelle says. “I can walk around campus and see that there are certain buildings, like Grant Hall, that are pretty much the same as they were back then.

“I hear her talk about going to football games at Richardson Stadium – I played soccer in that old stadium!”

Jean Tucker was born March 28, 1919, near Prescott, Ont., and grew up in the farming town of Paisley, on Ontario’s Bruce Peninsula.

The First World War had ended barely four months before, and her father was a veteran of that great conflict. In fact, her parents met at Grant Hall where they were both working to treat wounded soldiers.

Like many medical students, Robert had been excused from his studies to go overseas for the war. He served with the Canadian Army Medical Corps in Egypt, tending the casualties of the disastrous Dardanelles campaign at the huge Abbassia military hospital outside Cairo.

He returned to Queen’s after his service and graduated in the class of 1916.

Back in Paisley, Robert found his wartime knowledge of tropical medicine less useful than obstetrics. Jean tells her children tales of her father travelling in the dead of night through the snow in a horse-drawn cutter to deliver babies at isolated farmhouses. Country doctors were respected, but poorly paid.

“It was a hard life. People used to pay him in manure,” says Jean’s daughter and Michelle’s aunt, Anne Galipeau. “They’d literally dump it off in front of his house. Being a country doctor wasn’t a money--making affair.”

A loyal Queen’s graduate, Robert would work in his study and delegate Jean and her sisters to find out the latest football scores from his alma mater.

“He would always be saying to us, ‘Go get the score,’” Jean recalls, her memory still vivid. “So we were always looking for the football scores from Queen’s. And when we got the score we’d knock on the office door and tell him, ‘Yes! Queen’s won the football game.’”

When it came time for Jean to go to university, there was little doubt where she would study. She arrived in Kingston by train, and moved in with her aunt Ethel and her family at 404 Albert St., a house that still stands at the corner of Mack Street, opposite Victoria Park.

In 1937, Jean’s freshman year, Mac-kenzie King was prime minister and Canada was mired in the seven-th year of the Great Depression. It was the year the airship Hindenburg exploded in flames in Lakehurst, N.J., and aviator Amelia Ea-r-hart disappeared somewhere in the South Pacific. In Europe, Germany’s führer, Adolf Hitler, was making plans for the annexation of Austria, sowing the seeds of another world war. Jean dreamed of being a doctor like her father, but he advised against it.

“My father told me that medicine was too hard a life for a woman.”

It was an older cousin, Don Stewart, himself a professor at Queen’s, who steered Jean into science.

Jean was one of only three women in the class. The others – Edna Cohrs and Marjorie Howie – became lifelong friends.

Student life was very different from today. Like all students, Jean wore black academic gowns to class. One professor would greet his students each morning with “Gentlemen, are we ready?” blatantly ignoring his female students.

Jean recalls one professor who would work across the blackboard, scribbling out equations with his right hand and erasing them just as quickly with his left. “He’d say, ‘It’s obvious!’” she said, still chortling more than 80 years later.

Jean was a star student, winning awards for top marks in the class. She worked as a teaching assistant, marking papers mailed in by correspondence students.

“People could get a degree at Queen’s without going. They’d mail in their answers and I’d mark them,” she says.

On weekends, Jean and her friends would go to dances in Ban Righ Hall. And always there was football. “We would never miss a football game,” she says.

The family’s ties are deep at Queen’s. Jean’s cousin Don Stewart, who guided her into mathematics, was himself a math professor. His younger brother, Harold, was an electrical engineering graduate and lecturer who built an AM radio transmitter for the fledgling campus radio station, CFRC, making it a leader in Canadian radio broadcasting. Her sister, author and journalist Doris Tucker-Pennington (Arts’43), was also an alumna.

One of Jean’s friends and tennis partners was Agnes Richardson, niece of Capt. George Taylor Richardson, a standout Golden Gaels athlete who was killed in action in France in 1916. Richardson Stadium was named in his honour.

When Jean graduated in 1941, her parents made the arduous journey from Paisley to attend. The Second World War was raging and the new grad found work in Toronto with the National Research Council helping in the war effort, studying submarine buoyancy.

After the war, she continued working at the University of Toronto, using the school’s primitive computer and travelling to Boston and Harvard University to use its more sophisticated machines.

She was hired by Harvey Gellman, one of Canada’s early high-tech pioneers, to work for his company, DCF. As well as working on DCF contracts at the nuclear reactor site at Chalk River, Ont., Jean helped Gellman in his search for more powerful computers. One computer she helped procure was the room-sized, 2,500- kilogram IBM 650, the world’s first commercially successful computer.

Jean also taught math at schools in Rockland, Ont., outside Ottawa and for five years at Havergal College in Toronto before leaving the workforce in her 40s, when her daughters, Anne and Lynne, were born. Her husband, John Galipeau, died in 2015.

And still, four score years later, Jean’s love of Queen’s remains. She reads every issue of the Queen’s Alumni Review from cover to cover. She still roots for a Golden Gaels football win.

In Jean’s lifetime, the world has changed in almost unimaginable ways. Today’s smartphones dwarf the old computers like the IBM 650 in power, if not in size. Though she worked shoulder to shoulder with men in Canada’s fledgling computer industry, she was almost certainly paid less: in those days, salary just wasn’t something you asked about.

“Back then, it wasn’t common for women like her to go to school,” says her granddaughter, Michelle. “It’s something that’s always inspired me to go into academics.

“I think, even today, a lot of women aren’t encouraged to go into maths and sciences. But that’s never been a feeling I’ve had. I’ve always felt encouraged to and I think that’s mainly because of her doing that so long ago. It never struck me that I couldn’t do it.”

Does Jean think of herself as a pioneer? A trailblazer for women in science?

“She’s way too humble,” says Michelle. “But everyone else knows how incredible she is.” 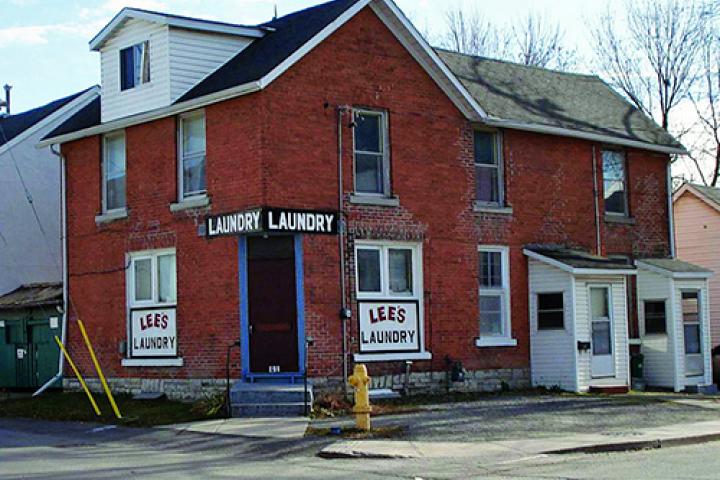 On the southeast corner of ­Division and Earl streets, surrounded by student housing, stands the...
View The Lee Family's legacy of love

Building on a family legacy

At home in East Aurora, N.Y., Dr. Michael Lynch, Meds’58, reflects on what he’s most proud of in...
View Building on a family legacy
Top