Step by step: Unravelling the secrets of walking

Queen’s engineering team has designed a device that saves a little energy for people who are on their feet all day. The results of their study, led by Dr. Michael Shepertycky, have just been published in Science, regarded by many as one of the world’s top research journals. Dr. Shepertycky was still a PhD student in biomedical engineering when the team submitted the paper, making the achievement even more special.

He and his supervisors, Dr. Qingguo Li and Dr. Yan-Fei Liu, discovered a paradox: they could make it easier for people to walk by creating a device that removes energy from the legs during each step, saving the user energy in the long run.

Here’s how it works: Humans, like cars, have to hit the brakes sometimes. You cannot walk – or drive – using the accelerator alone. For humans, the braking action occurs during the swing period of gait, prior to the foot contacting the ground. The team’s new device, called an exoskeleton, applies slight resistance to the leg motion at this critical point. “If the muscles were to not slow down the leg, the impact forces generated when the foot contacts the ground would be large and potentially damaging,” says Dr. Li. “The human body is not like a car – it does not have a brake disc. Humans use the muscles at the back of the leg to brake the [swing] motion.”

Your legs slow down and stop on cue, but this braking requires energy. The device does part of the braking; therefore, your muscles and the device share the work. This reduction in muscle activation saves you energy.

Dr. Shepertycky explains, “Taking away energy to help a person walk is counterintuitive, but because the knee muscles naturally remove energy, helping them do so makes walking more efficient. The device’s resistance feels natural and does not impede forward movement, but after a long day of hiking or walking (for instance, after a nurse’s long shift), one is likely to be less tired.”

The exoskeleton acts gently to avoid hitting the brakes too hard, says Dr. Li. The key is “the timing and the magnitude” of the braking action. The device is small, weighing less than one kilogram, and is mounted to a backpack with a cable extending down each of the user’s legs, attaching just above the ankle. The device converts the removed energy into electricity using a tiny generator. The researchers hope that, in the future, this electricity could power the exoskeleton’s active control system, with the surplus powering portable devices in remote locations for wilderness hikers or others operating far from a power source.

By tracking the movements of volunteers on treadmills and measuring their energy consumption, the group determined that a person saves 2.5 per cent of the energy normally required to walk. Although a couple of percentage points may not sound like a lot, it is: Any car manufacturer would be thrilled to cut fuel consumption by 2.5 per cent. This is just the start. While the device is not yet ready for store shelves, this study highlights its potential. “As our understanding of the biomechanics of walking improves and we optimize the device, the energy saving will go up,” Dr. Shepertycky says.

Dr. Shepertycky is from Thompson, Man., a small northern community. He came to Queen’s in 2007 for its tight community and its excellent engineering program, and he has stayed for all three degrees. With the team, he started the exoskeleton project 11 years ago as an undergrad. “Our original device focused on generating electricity from human movement. Early evaluation of the device revealed the potential for providing user assistance. Since then, we have focused on developing this unique means of helping the user. The device is based on a simple idea, but it took years to perfect,” he says. While there were several roadblocks along the way, “I think every time that we did not achieve our goal, I already had ideas about how to improve the device. We were always progressing.”

Dr. Shepertycky says he was lucky to have completed all his hands-on lab work by early 2020, which allowed him to keep analyzing data and writing after the lab closed. The current prototype is the fourth, nicknamed Watson (as in watts of power). The previous one was Joulia (energy is measured in joules). Lab humour. Science published the work in May.

The team has patented its device and hopes to commercialize it, but that is down the road. Dr. Li explains that walking still has secrets, even after centuries of study. “Biomechanists and physiologists are still figuring out the fundamentals of human gait. It’s an ongoing topic.”

This study is one of the many steps in understanding human walking. 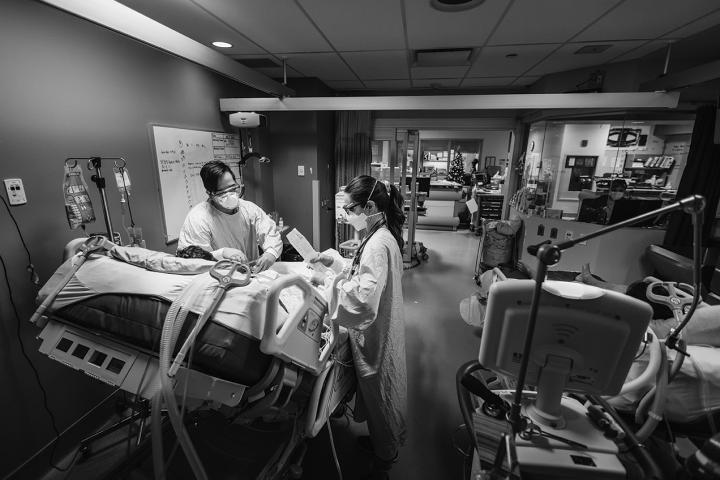 Operating behind the lens

As an emergency physician, wife, and mother, early in the pandemic I felt an overwhelming sense of...
View Operating behind the lens