Berman is the author, co-author and co-editor of six books and more than forty published papers. His early work focused on the political economy of the colonial state in Africa and its impact on African societies, including Control and Crisis in Colonial Kenya: the Dialectic of Domination (James Currey/Ohio University Press, 1990), which won the Joel Gregory Prize from the Canadian Association of African Studies in 1991; and, with John Lonsdale, Unhappy Valley: Conflict in Kenya and Africa (James Currey/Ohio University Press, 1992), which received the Trevor Reese Memorial Prize in Imperial and Commonwealth History in 1995. Since the early 1990s his work has focused increasingly on the development of modern African ethnicities and their political expression. His recent publications include "Ethnicity, Patronage and the African State: the politics of uncivil nationalism, " African Affairs, 1998; Critical Perspectives on Politics and Socio-Economic Development in Ghana, edited with Wisdom Tettey and Korbla Puplampu (Brill, 2003), Ethnicity and Democracy in Africa edited with Dickson Eyoh and Will Kymlicka (James Currey, Ohio University Press, 2004) and "A Palimpsest of Contradictions: the Study of Politics, Ethnicity and the State in Africa," International Journal of African Historical Studies, 2004. His presidential address to the African Studies Association, "The Ordeal of Modernity in an Age of Terror," will be published in African Studies Review in early 2006. He has also published on the relationship of technology and development, particularly information technology, in journals such as Science as Culture, World Futures, Artificial Intelligence and Society, and Public Administration and Development. He and John Lonsdale are currently finishing The House of Custom: Jomo Kenyatta, Louis Leakey and the Kikuyu. 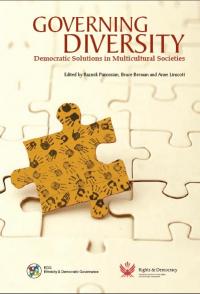