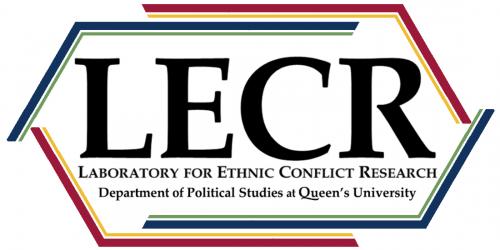 Dedicated to the advancement of knowledge, the Laboratory for Ethnic Conflict Research (LECR) engages in research, observation, and analysis of ethnic conflict from comparative and theoretical perspectives. The LECR is housed in the Centre for the Study of Democracy and Diversity at Queen's University and promotes collaborative research and partnership endeavours of both intellectual and policy relevance, locally and internationally.

Ethnic conflict has sprung onto the centre stage of world politics in recent decades. Conceptually broad, the term “ethnic conflict” has been used in reference to a wide range of conflicts, including struggles between distinct identity groups, between state and minorities, or against foreign rule. Sometimes expressed violently through civil wars or riots, and sometimes in non-violent, more institutionalized ways, ethnic conflict is typically characterized by political strife along ascriptive lines based on features such as language, religion and sectarianism, physical characteristics, culture, or collective memories.

Ethnic conflicts vary along many dimensions: some are violent and others not; some are more or less intractable; and some are contained within state borders while others spill over to neighbouring countries, threatening whole regions. Scholarly research has focused on different important and interrelated issues. One debate revolves around the question of conflict causes and triggers. Another debate looks at causes of intractability. Within this debate, the role of spoilers has received increasing attention. Other scholars study the mobilization strategies of the actors involved to better understand how conflicts evolve and unfold. Yet others examine the relationship between democratization and ethnic conflict. Finally, many scholars debate how best to manage or resolve ethnic conflicts, including their subtypes.