Self-assembly of N-heterocyclic carbenes on Au(111)

Abstract Although the self-assembly of organic ligands on gold has been dominated by sulfur-based ligands for decades, a new ligand class, N-heterocyclic carbenes (NHCs), has appeared as an interesting alternative. However, fundamental questions surrounding self-assembly of this new ligand remain unanswered. Herein, we describe the effect of NHC structure, surface coverage, and substrate temperature on mobility, thermal stability, NHC surface geometry, and self-assembly. Analysis of NHC adsorption and self-assembly by scanning tunneling microscopy and density functional theory have revealed the importance of NHC-surface interactions and attractive NHC-NHC interactions on NHC monolayer structures. A remarkable way these interactions manifest is the need for a threshold NHC surface coverage to produce upright, adatom-mediated adsorption motifs with low surface diffusion. NHC wingtip structure is also critical, with primary substituents leading to the formation of flat-lying NHC2Au complexes, which have high mobility when isolated, but self-assemble into stable ordered lattices at higher surface concentrations. These and other studies of NHC surface chemistry will be crucial for the success of these next-generation monolayers.

Abstract It has recently been demonstrated that N-heterocyclic carbenes (NHCs) form self-assembled monolayers (SAMs) on metal surfaces. Consequently, it is important to both characterize and understand their binding modes to fully exploit NHCs in functional surface systems. To assist with this effort, we have performed first-principles total energy calculations for NHCs on Au(111) and simulations of X-ray absorption near edge structure (XANES). The NHCs we have considered are N,N-dimethyl-, N,N-diethyl-, N,N-diisopropylbenzimidazolylidene (BNHCX, with X = Me, Et, and iPr, respectively) and the bis-BNHCX–Au complexes derived from these molecules. We present a comprehensive analysis of the energetic stability of both the BNHCXand the complexes on Au(111) and, for the former, examine the role of the wing group in determining the attachment geometry. Further structural characterization is performed by calculating the nitrogen K-edge X-ray absorption spectra. Our simulated XANES results give insight into (i) the relationship between the BNHCX/Au geometry and the N(1s) → π*/σ*, pre-edge/near-edge, absorption intensities, and (ii) the contributions of the molecular deformation and molecule–surface electronic interaction to the XANES spectrum. These simulated spectra work not only as a map to the BNHCX conformation, but also, combined with electronic structure calculations, provide a clear understanding of recent experimental XANES findings on BNHCX/Au.

Abstract We investigated physics students’ behavior in a second-year laboratory by analyzing transcribed audio recordings of laboratory sessions. One student group was given both a problem and procedure and asked to analyze and explain their results. Another was provided with only the problem and asked to design and execute the experiment, interpret the data, and draw conclusions. These two approaches involved different levels of student inquiry and they have been described as guided and open inquiry, respectively. The latter gave students more opportunities to practice “designing experiments,” one of the six major learning outcomes in the recommendations for the undergraduate physics laboratory curriculum by the American Association of Physics Teachers. Qualitative analysis was performed of the audio transcripts to identify emergent themes and it was augmented by quantitative analysis for a richer understanding of student behavior. An important finding is that significant improvements can be made to undergraduate laboratories impacting student behavior by increasing the level of inquiry in laboratory experiments. This is most easily achieved by requiring students to design their own experimental procedures.

Abstract The interplay of adsorption geometry and interface dipoles of the transition-metal complex Ir(ppy)3 on Cu(111) was studied using low-temperature scanning probe microscopy and density-functional-theory calculations. We find that the orientation of the molecule’s intrinsic dipole moment with respect to the surface has a strong influence on the total energy of the different configurations, where the most stable one has the molecular dipole moment pointing out of the surface plane along the surface normal. Adsorption-induced redistribution of charges results in an additional dipole moment that also points out of the surface plane for all configurations. Submolecularly resolved maps of the resulting local contact potential difference suggest that any in-plane dipole moment is very effectively screened. 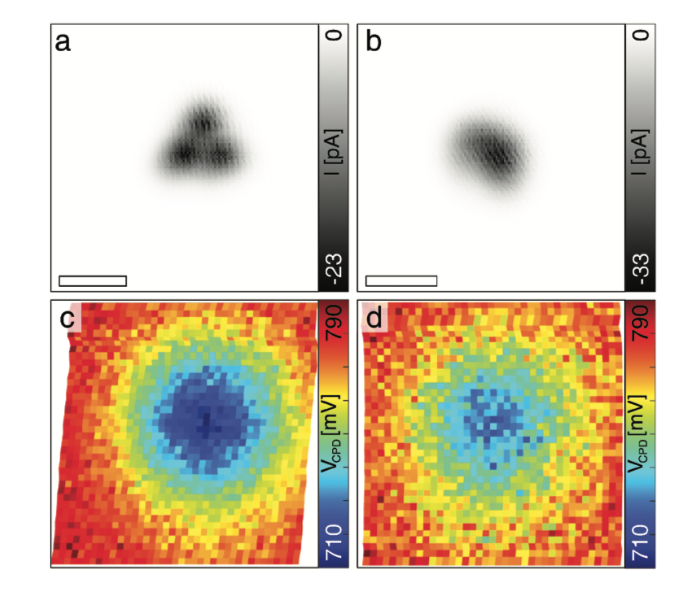 Abstract The formation of organic films on gold employing N-heterocyclic carbenes (NHCs) has been previously shown to be a useful strategy for generating stable organic films. However, NHCs or NHC precursors typically require inert atmosphere and harsh conditions for their generation and use. Herein we describe the use of benzimidazolium hydrogen carbonates as bench stable solid precursors for the preparation of NHC films in solution or by vapour-phase deposition from the solid state. The ability to prepare these films by vapour-phase deposition permitted the analysis of the films by a variety of surface science techniques, resulting in the first measurement of NHC desorption energy (158±10 kJ mol− 1) and confirmation that the NHC sits upright on the surface. The use of these films in surface plasmon resonance-type biosensing is described, where they provide specific advantages versus traditional thiol-based films.

Surface and near Surface Defects in delta-doped Si(111)

Abstract The B/Si(111)-(sqrt 3 x sqrt 3)R30 surface reconstruction has recently been used as a platform for supramolecular assembly. However, our understanding of the native defects in this delta-doped system and their corresponding STM signatures is incomplete. So we have studied this system using ab initio total energy calculations and scanning tunneling microscopy. We find that although perturbations to the equilibrium geometry of the surface are in general weak, the perturbations to the electronic structure can be quite strong due to the presence of dangling bonds composed of Si-3pz orbitals. Additionally, we propose a possible structure for a previously unidentified defect that appears in positive bias constant-current STM images as an equilateral triangular arrangement of Si adatoms with attenuated intensity. 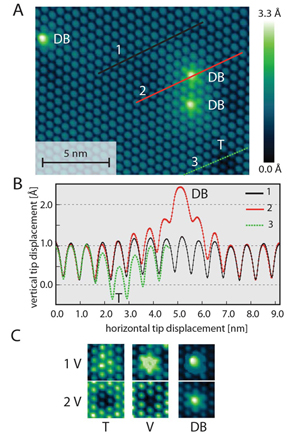 Abstract We have studied the near surface defects of the delta-doped B:Si(111)-(sqrt 3x sqrt 3)R30 system using a combination of scanning tunneling microscopy, non-contact atomic force microscopy, Kelvin probe force microscopy, total energy DFT and STM theoretical simulations. We positively identify and characterize two near surface defects: the adatom vacancy and a B substitutional defect located in the second Si bilayer. We also confirm the assignment of the dangling-bond defect. Additionally, the influence of the defects on the surface electronic structure, the modulation of the surface potential and chemical activity of surface is investigated. 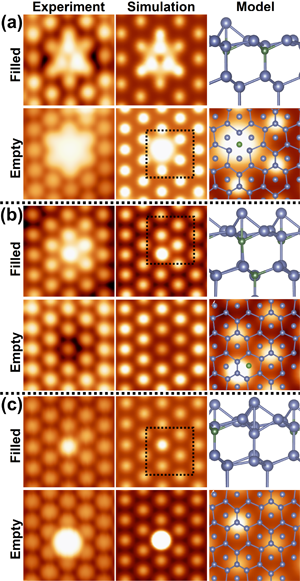 Abstract Since the first report of thiol-based self-assembled monolayers (SAMs) 30 years ago, these structures have been examined in a huge variety of applications. The oxidative and thermal instabilities of these systems are widely known, however, and are an impediment to their widespread commercial use. Here, we describe the generation of N-heterocyclic carbene (NHC)-based SAMs on gold that demonstrate considerably greater resistance to heat and chemical reagents than the thiol-based counterparts. This increased stability is related to the increased strength of the gold-carbon bond relative to that of a gold-sulfur bond, and to a different mode of bonding in the case of the carbene ligand. Once bound to gold, NHCs are not displaced by thiols or thioethers, and are stable to high temperatures, boiling water, organic solvents, pH extremes, electrochemical cycling above 0 V and 1% hydrogen peroxide. In particular, benzimidazole-derived carbenes provide films with the highest stabilities and evidence of short-range molecular ordering. Chemical derivatization can be employed to adjust the surface properties of NHC-based SAMs.