Robert Dennis completed his PhD in 2014 and departed Queen’s a few weeks later for the University of Prince Edward Island. Accepting a faculty position in the Religious Studies Department, he served as Saint Dunstan’s University Visiting Scholar until July 2017 when he transitioned into a tenure-track position. Robert has helped advance the Catholic Studies programme, including its commitment to “experiential and global learning.” Through vigorous fundraising and the generosity of donors, new programming and educational opportunities have been made possible in New York City and Rome, Italy. At UPEI, Robert helps manage the Saint Dunstan’s University Institute of Christianity and Culture.

Living and working in a close-knit community has been a great joy for “Dr. Rob,” as his students call him, and Island life affords many opportunities to speak to community groups and organizations on all facets of Catholicism, the Vatican, and the Christian intellectual tradition. These engagements complement media work, speaking invitations at home and abroad, work on two book-length writing projects, and terms as President General of the Canadian Catholic Historical Association and as an Associate of the L.R. Wilson Institute for Canadian History at McMaster University.

Outside the academy, Robert is married to an amazing woman, blessed to have two young children, and is kept busy by a mischievous golden retriever. He invites friends and colleagues to keep in touch at rdennis@upei.ca.

Read about his course "Rome: Christianity and Culture", where students travel to Italy to learn about history, art, and philosophy. 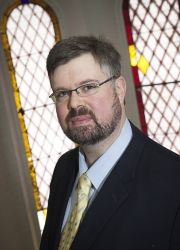