Ted Goldring is Head of English, History and Geography at Loyalist Collegiate and Vocational Institute, a Kingston high school. We met with Ted at LCVI, a beehive of activity, 700 students strong. We began by asking how his Queen’s History degree (1997) helped him when he began his teaching career. “Queen's History gave me a strong enough base of knowledge that when I first began teaching I didn't necessarily have to spend much of my energy coming to terms with the content. I knew, more or less, what to teach. I could therefore spend more time thinking about how to teach, how to make things fun and interesting. “Can you give us an example?” “Yes. I soon realized that I could combine my interests in History and English and offer a joint course, one part standard history, one part standard English, but with assignments which combined both.” “And students get credit for both subjects?” Ted responded: “Yes. I will often devise assignments which use literature as a window into a historical period. Admittedly, some students will say ‘couldn’t we just have a test?’--meaning the regurgitation of facts. Obviously I want students to master the basic facts and we do that. But I have found that an emphasis on storytelling, on anecdote, can grab students’ attention. Now, thanks to the internet, I can call up images or video clips of, say, thousands of North Korean students doing gymnastics in an austere, martial setting. And this allows students to see life inside a totalitarian state. It fascinates them. I can show them an image from Google Satellite of the Korean peninsula, taken at night. And it’s nothing but darkness north of the 38th parallel. Once I have gained their attention using a device like this, I can go deeper into the story, in a more conventional manner. I can show an image from the Russian Revolution and then the class can go deeper into the discussion, which might center on the global impact of this event, and how it still resonates, to this day.” “Were you inspired by your Queen’s professors to teach this way?” we asked Ted. “Yes. Professor Karchmar’s seminar, (with the memorable title, “The Mailed Fist”—Editor) introduced me to military history. He was a fascinating man. A nice man. He was a great storyteller. And a great cook too! I still remember many of the basic themes of that course.”

“What sorts of challenges do teachers face in the digital age,” we asked? Ted responded: “Some students might lack the skills to dig deep into the research, and this is, ironically, the result of information being so readily available. Studying in the 1990s, I had to learn how to conduct time-consuming library searches. Today, some students will simply do a keyword search and think they’re done. Having said that, most of my students are doing amazing research, above and beyond what we were capable of at their age. I think the opportunities provided by the digital age outweigh the pitfalls. In the end, the internet, Google, Wikipedia, digital cameras, digital projectors…it’s all awesome. I use digital media in class every day. On the whole, these are incredibly powerful and useful tools. Of course they’re not the only tools.”

We asked: “As a high school teacher, it must be somewhat of a challenge that students have such wide access to information—how to help them make sense of it all?” Ted agreed that it was challenging, and added: “You still need to teach the skill of researching. It takes a lot of time. You can give a kid a research assignment and they might instantly get some information on a smartphone app and think they're done. They soon learn that they are not! At the end of the day, I'll take that challenge—the challenge of teaching in an age saturated by media, by information--if I can keep the internet, with its wealth of ideas, opinions, and facts.”

“What does your Queen’s degree mean to you?” “My degree also showed me the importance of good writing, essay writing in particular. As a teacher one must be trained in at least two subject areas, and my second area is English. I didn't teach my first History class until the fourth year of my career. But the skills I learned in researching and writing essays in History were incredibly useful in teaching both high school-level English and History. I can bring my knowledge of history to the novels we study in English classes. It's not hard to see how a good background in History can help you teach To Kill a Mockingbird. Right now I teach a combination Grade 10 English and History course where I'm able to combine the curriculum, so I can have students read Night and Maus, both novels about the Holocaust, and then have them write a comparative essay in which they have to argue which is more effective at giving insight into the Holocaust. I also teach a World Religions course which I like a lot and it has been popular with students too.”

“I have many fond memories of my History classes at Queen's. I loved my seminar courses. They often started with us discussing the readings, but then sometimes they might evolve into into fascinating conversations that could go off on a tangent. I've often mentioned to my students that History graduates are among the best conversationalists--the kind of people you want at a dinner party, since they tend to have a great breadth of knowledge. There were so many interesting, erudite people in my classes it was hard not to have a good time. I have fond memories of staying up until all hours finishing essays and handing them in just in time, though I also remember them fondly because I know I don't have to do that anymore!”

“Do you have any advice for aspiring high school teachers?” Ted concluded: “First, make sure there are two subject areas that you might like to teach. High school teachers need two ‘teachables’ and you can't rely on doing only one over the course of your career. I'd recommend that students take lots of Canadian history. Every high school student has to take Grade Ten 20th Century Canadian History. So you can count on teaching that one. Try to get a good background in twentieth century world history. World War I, the 20s and 30s, the Holocaust, World War II, the cold war, decolonization are all major elements of that course. Finally, I would recommend that students take some Religion courses—world religions— because few other topics are so relevant to our world today. Such courses will provide insight into pretty much everything.”

Ted is married with 2 children. His wife has four degrees from Queen’s. Born in Kingston, Ted was raised mostly in Cobourg. Upon graduation from teacher’s college, Ted got a job in Sarnia and taught for two years before choosing to return to Kingston, a city he loves. And it’s a sentiment shared by the Goldring family: Ted’s brother teaches History and Geography at LCVI as well! And his parents have moved back to town. LCVI is the home to many Queen’s grads: Ted’s colleague, Kalev Promm, is another Queen’s History graduate working at the school. Ted coaches badminton, has taught photography, and has been known to attend the occasional weekend wedding—as a part-time professional photographer. 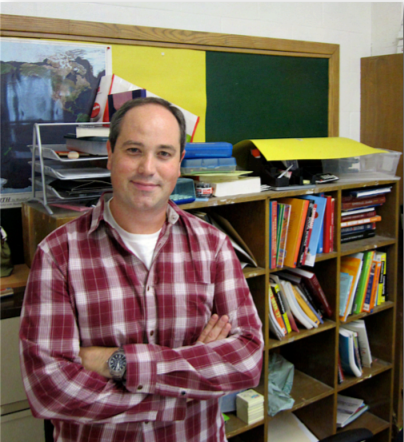