Chris Kilford successfully defended his PhD dissertation in May 2009 but was unable to attend the Fall Convocation as he headed off to Afghanistan in July 2009. Serving as a Lieutenant Colonel in the Canadian Forces, Chris was kept very busy as Canada's Deputy Defence Attaché in Kabul until July of this year. After a well deserved break, he then began a six-month long Turkish language course in Ottawa - Chris and his wife, Alison, will be moving to Ankara in 2011 where he will be employed as the Canadian Defence Attaché providing advice on defence related matters to the Canadian Ambassador. In addition to Turkey, Chris will also be cross-accredited to Azerbaijan, Georgia and Turkmenistan and will be travelling extensively in the region. Lastly, in other news, the Canadian Defence Academy Press has just published his new book: The Other Cold War - Canadian Military Assistance to the Developing World 1945-1975. The book is based on his PhD work at Queen's, which was carried out under the guidance of Dr. Allan English. 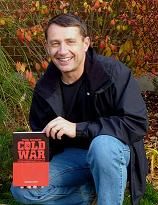