"Why did you study history?"

I did an Hons BA in history as well as an MA.  I don't really recall taking too many lecture courses in history - in those days most courses and all the upper level courses were seminars.  'Point to multi-point' (a term I learned financing media companies) gave to a shared exploration of the subject du jour.  Fantastic. I studied a range of history from euro medieval to 19th century American political thought, but 20th century Canadian politics was my favorite.  Dr Graham, Bev Swanson, Gerry Tulchinsky (for whom I worked for 2 years as a TA) and especially Fred Gibson, my MA thesis advisor, were my history department mentors. I put myself through school through a combination of summer job savings, working for the AMS (as a constable - doubt they have those anymore) and as a don in one of the west campus residences, a bunch of graduate scholarships, and as a research assistant on Professor's Gibson's History of Queen's (Vol.2).

While I was writing my thesis I started thinking about next steps, and I applied and received acceptances to several Canadian and US doctoral programs in history. But I wasn't sure I had the skills - and resilience - to complete a PhD, so, at Professor Gibson's suggestion, I deferred my acceptances and enrolled in the (new) one year MPA program at Queen's.  I enjoyed the program (or most of it), and played soccer for Queen's for two seasons, but after nearly 7 1/2 years in university I was ready for a change. I worked on Pierre Trudeau's last election campaign, knocked on doors in Montreal, Ottawa, and Toronto, and, after many, many rejections, was finally offered a trainee position in the international department of CIBC in Toronto. Less than two years later I was posted to New York, where I had a
20+ year career on Wall Street.

Fondest memories at Queen's: Skating for miles on Lake Ontario the years we had black ice.  Seeing Gordon Lightfoot at Jock Hardy Arena.  Passing my MA thesis defense. Playing soccer and hockey for Arts '76, and then soccer for Queen's in '78 and '79.  Working as a don in Trotter House. Getting involved in student government, and getting to know Padre Laverty.  Presenting my essay on 1930's demagogic provincial leadership ('The Politics of Fear') to the 400-level Canadian Politics seminar and knowing then I could handle graduate school.  Spending two summers in Kingston, doing research on the Queen's book.  Among many, many others.

Advice to History Students: I just finished listening to Mike McNair's podcast interview.  He said it - the research, written and oral communications skills you develop in Queen's history will stand you in good stead whatever you do.  Stick with what you love, always say yes when opportunities present themselves, and take a chance.  It can be a little scary, but it's the spice of life. 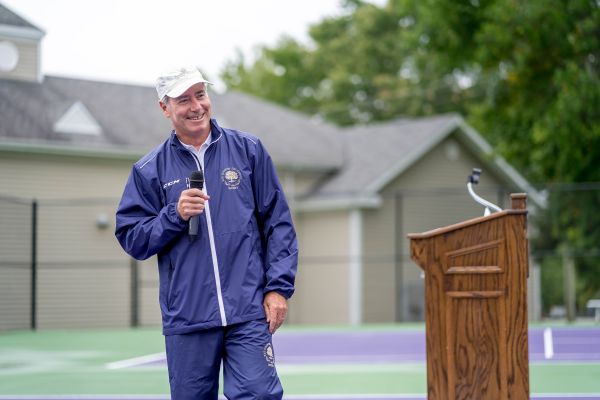