An Irish History of Civilization, Volume 1 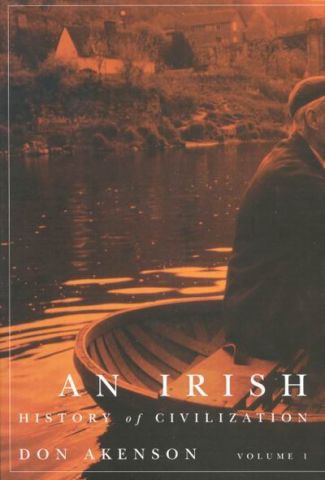 History is our true novel, says Roy Foster, Ireland's leading historian. In An Irish History of Civilization, the world's foremost scholar of the Irish diaspora, Don Akenson, fuses history and fiction into an iconoclastic narrative of a people and their influence around the globe.

In a sprawling chronicle of civilization through Irish eyes, Akenson takes us from St Patrick to Woodie Guthrie, from Constantine to John F. Kennedy, from India to the Australian outback. In two volumes of masterful storytelling he creates ironic, playful, and acerbic historical miniatures - a quixotic series of reconstructions woven into a helix in which the same historical figures reappear in radically different contexts as their narratives intersect with the larger picture.

An Irish History of Civilization is about the Irish at home and abroad, the great and the small, the noble and the depraved, the wise and the foolish. In vignettes of Irish misery, triumph, folly, and glory, Akenson weaves artful fictions - his hilarious portrait of Victorian Canadian icon Susannnah Moodie, for instance, will outlive a hundred solemn monographs on her literary life and his tales of Irish Protestants and Catholics will leave no doubt about their impact on American life.

Like the archetypal stories in the Talmuds, Akenson's model, the stories in An Irish History of Civilization are universal for big truths require a big canvas. He follows his chosen peoples on their odyssey around the globe in a story like no other, the lines between history and fiction irretrievably lost in the mists of Irish time.

VOLUME 1 takes Irish civilization from its Semitic roots in early Christianity to St Patrick to early Irish conquests in Europe and several New Worlds, and from the eighteenth-century penal laws to the emergence of Irish Catholics as energetic imperializers within the First and Second British Empires.

VOLUME 2 begins with the Great Famine and moves on to show the Irish adapting, improvising, and innovating in Ireland, North America, New Zealand, Australia, Polynesia, and South Africa. Akenson ends by demonstrating conclusively the centrality of both Catholic and Protestant Irish culture to the United States.