Discovering the End of Time. Irish Evangelicals in the Age of Daniel O’Connell 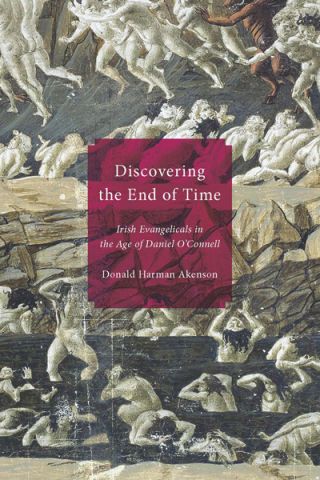 Apocalyptic millennialism is embraced by the most powerful strands of evangelical Christianity. The followers of these groups believe in the physical return of Jesus to Earth in the Second Coming, the affirmation of a Rapture, a millennium of peace under the rule of Jesus and his saints, and, at last, final judgment and deep eternity.

In Discovering the End of Time, Donald Akenson traces the primary vector of apocalyptic millennialism to southern Ireland in the 1820s and ’30s. Surprisingly, these apocalyptic concepts - which many scholars associate with the poor, the ill-educated, and the desperate - were articulated most forcefully by a rich, well-educated coterie of Irish Protestants. Drawing a striking portrait of John Nelson Darby, the major figure in the evolution of evangelical dispensationalism, Akenson demonstrates Darby’s formative influence on ideas that later came to have a foundational impact on American evangelicalism in general and on Christian fundamentalism in particular. Careful to emphasize that recognizing the origins of apocalyptic millennialism in no way implies a judgment on the validity of its constructs, Akenson draws on a deep knowledge of early nineteenth-century history and theology to deliver a powerful history of an Irish religious elite and a major intersection in the evolution of modern Christianity.

Opening the door into an Ireland that was hiding in plain sight, Discovering the End of Time tells a remarkable story, at once erudite, conversational, and humorous, and characterized by an impressive range and depth of research.