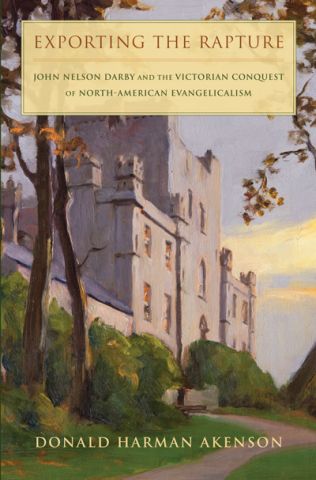 Apocalyptic millennialism is one of the most powerful strands in evangelical Christianity. Across many powerful evangelical groups there is general devotion to faith in the physical return of Jesus in the Second Coming, the affirmation of a Rapture heavenward of “saved” believers, a millennium of peace under the rule of Jesus and his saints, and, eventually, a final judgment and entry into deep eternity.

In Discovering the End of Time Donald Akenson traced the emergence of modern apocalyptic millennialism to southern Ireland in the 1820s and '30s. In Exporting the Rapture he documents how the complex ideological construction that has come to dominate modern evangelical thought was enhulled in an organizational system that made it exportable from the British Isles to North America - and around the world. A key figure in this process was John Nelson Darby, a formative influence on evangelical apocalypticism in Ireland and the volatile central figure in Brethren apocalypticism throughout the British Isles, who ultimately became a successful missionary to the United States and Canada. Akenson emphasizes that, as strong a personality as John Nelson Darby was, the real story is that he became a vector for the transmission of a highly seductive ideological system from the old world to the new. So beguiling, adaptable, and compelling was the new Dispensational system that Darby injected into North American evangelicalism that it continued to spread widely after his death. By the 1920s, the system had become the doctrinal template of the fundamentalist branch of North-American evangelicalism.

Highlighting the brilliant influence of John Nelson Darby, Exporting the Rapture documents for the first time how the complex construct of Dispensationalism was repackaged from its southern Irish roots into a system ideal for North American evangelicals.