Surpassing Wonder. The Invention of the Bible and the Talmuds 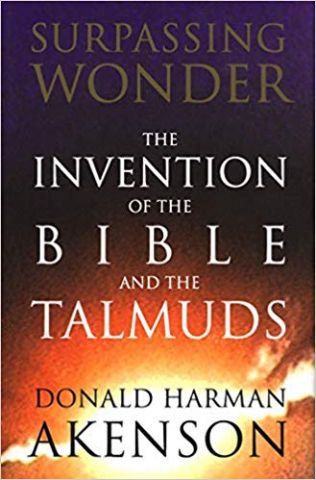 What Noam Chomsky did for political commentary, and Stephen Hawking did for cosmology, Donald Harman Akenson does for the Bible and its interpreters - and the resulting conclusions are just as astounding. Surpassing Wonder illuminates how the greatest cultural artifacts of our civilization are related to one another and constitute the very core of our consciousness.

With biting irreverence for denominational prejudices and the pretensions of academics, Akenson renews our sense of awe before these religious works. He challenges received doctrines, arguing that the ancient Jews were indeed idol worshippers and that Saint Paul did not believe in the bodily resurrection of Jesus of Nazareth or in the virgin birth.

With wit, elegance, and clarity Surpassing Wonder makes the ancient Hebrew scriptures, the Christian New Testament, and the Talmuds of the Rabbis accessible to all and shows they can be understood only in relation to each other and against their specific historical settings. Akenson argues that each of the great texts must be considered as the product of a single author and thus as a religious invention - that is, as a self-consciously formed unity rather than an anthology of disparate works. He also argues that the great inventor of the Hebrew scriptures should be credited with constructing the very concept of narrative history and thus the foundations of Western civilization.

Using a rich and imagistic language that combines tractor mechanics, Winnie-the-Pooh, and architecture with analogies from astronomy, evolutionary biology, and economics, Akenson brings about nothing less than a radical reformation of how to think about the sacred texts. He restores their spiritual power through a just appreciation of the achievement of their authors while leaving readers to decide for themselves on the presence of a “guiding hand.”

Surpassing Wonder is a penetrating study of the historian's craft and a brilliant exposé of how theologians and biblical scholars abuse historical reasoning and evidence in their treatment of the sacred texts. Just as a previous reformation cast out the priestly intercessors, so Akenson casts the scholars out of the temple and lets readers in to see the texts anew. In so doing he reinvests religion with meaning for a contemporary world and shows us how Western civilization was created not by the Greeks of Athens or the patricians of Rome but by the desert worshippers of Yahweh.