The Social Circulation of the Past: English Historical Culture, 1500-1730 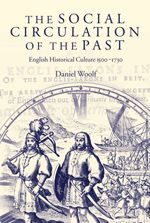 This book investigates the changing historical culture in England between the beginning of the sixteenth century and the early eighteenth century. Based on a wide variety of manuscript and printed sources from local and central repositories, it focuses on the social framework within which historical knowledge was generated, modified, and preserved, rather than on historiography or historical method.

Woolf begins his study by examining the ways in which early modern people acclimatized themselves to accelerating changes in their physical, social, religious, and economic environments. A developing, if uneasy, accommodation to change went hand in hand with shifting attitudes to the acceptability of novelty and innovation. The family was the central social unit throughout most of this time, and Woolf examines views of ancestry and heredity with a particular emphasis on the circulation of genealogical knowledge and its status relative to other forms of knowledge about the past.

The third part of the book turns to the subject of antiquarianism, investigating the relationship between the many varieties of antiquarian activity which focused on a visible and tangible past, and the emergence of a visual sense of history during the seventeenth century. It is argued that artefacts ranging from fossils to funeral urns were exchanged in an 'archaeological economy' among local discoverers of antiquities, most of whom were of humble station, local gentry and clergy, and university- or London-based antiquaries. It is through the force and volume of this type of exchange, rather than the scholarly contributions of particular authors, that England became much more historically aware by the early eighteenth century.

The fourth and final part takes this line of argument in a different direction, analyzing the study of recollections and memories of the past. Beginning with an examination of the place of memory in English life generally, Woolf argues that memory as a faculty existed in tension with writing (for instance, with the emergence of a much more record-orientated local archival system). The growing quantity of published historical material had considerable impact on community memories of the past, threatening to overwhelm the latter with an emerging national 'master-narrative' of history. At the same time, local communities managed to preserve a rich variety of beliefs about their surroundings, beliefs that testify to the strength of connection between oral and literate expression, and popular and élite cultures. However, oral modes of transmission, highly attractive to early Tudor antiquaries, were regarded with suspicion by early seventeenth-century scholars because of their vagueness and undocumentability. This skepticism was complemented by a deepening social hostility toward 'vulgar error' and the lower orders with which much of it was - not always correctly - associated. By the early eighteenth century, oral tradition was no longer a legitimate tool of the antiquary or the historian, though certain scholars began to preserve it as folklore, in which form it would be studied anew in the nineteenth and twentieth centuries.

In conclusion, Woolf argues that sweeping changes in the perception of the past and the understanding of its place in social life occurred during this period, producing a historical culture which was qualitatively different from that which had existed at the end of the fifteenth century. It is against this culture that the formal historical writing of the age must be understood and it is from it that eighteenth- and nineteenth-century historical writing, as well as related genres such as the historical novel, would emerge.