Women and Jewish Marriage Negotiations: For Love and Money 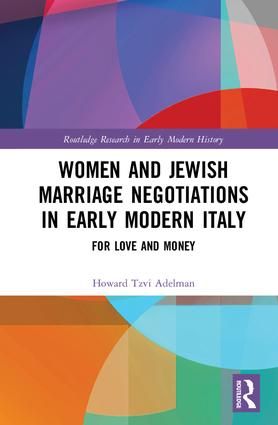 This book examines the role of women in Jewish family negotiations, using the setting of Italy from the end of the Renaissance to the Baroque. In ghettos at night and under the scrutiny of inquisitions, Jews flourished. Life and learning were enriched by Jews from the Iberian Peninsula, the Ottoman Empire, transalpine Europe, west and east, and Catholic neighbors. Rabbinic discourse represented conflicting customs in family formation and dissolution, especially at moments of crisis for women: forced betrothal; physical, mental and financial abuse; polygamy, and abandonment. In this book, case studies illustrate the ambiguity, drama, and danger to which women were exposed, as well as opportunities to make their voices heard and to extricate themselves from situations by forcing a divorce, collecting or seizing assets, and going to Catholic notaries to bequeath their assets outside traditional inheritance, often to other women. Despite intrusion by rabbis, their ability for coercion was limited, and their threats of punishments reflected the rhetoric of weakness rather than realistic options for implementation. The focus of this text is not what the law says, but rather how it enabled individual Jews, especially women, to speak and to act.