The novel concept of Spherical Proportional Counters (SPCs) can also be applied to the direct spectroscopy of fast neutrons, an appealing feature for neutron background estimation of rare event search experiments that may also find applications in industry.

Commercially available gaseous neutron counters rely either on 3He or 10BF3 through 3He(n,p)3H (Q=0.76 MeV) and 10B(n,α)7Li (Q=2.79 MeV) reactions, respectively, to detect both thermal and fast neutrons. These gases are widely used because of their high cross section at low energy which makes them ideal for thermal neutron counting measurements. However, because fast neutrons reaction cross sections are small in comparison, their detection requires the use of a moderator. Additionally, the fact that 3He is relatively expensive and 10BF3 gas is toxic further motivates consideration of alternatives.

In this context, the operation of an SPC with N2 gas is particularly interesting as it provides a low cost and robust alternative to existing technologies, and may allow for fast neutron spectroscopy up to 20 MeV. In N2 gas, both thermal and fast neutrons interact through 14N(n,p)14C (Q=625.87 keV) while the endothermic reaction 14N(n,α)11B (Q=-185 keV) is only accessible for fast neutrons. Although the 14N(n,p)14C reaction cross section for thermal neutrons is 3 orders of magnitude lower than that of the 3He(n,p)3H and 10B(n,α)7Li reactions, this disadvantage can easily be compensated by operating a sizable SPC (~m3).

Measurements of the neutron spectrum of several neutron sources were conducted using a 1.3 m copper sphere filled with N2 at 400 mbar. The figure below shows the distribution of events recorded during a neutron calibration run with a 252Cf source both in the rise time vs. energy plane (left) and in energy only (right).

The population of events at 625.8 keV corresponds to thermal neutrons interacting via the exothermic 14N(n,p)14C reaction. Because the two products of the process (14C and p) lose all their kinetic energy in the detector, it results in a mono-energetic peak at the Q-value of the reaction. The capture of fast neutron occurs mainly via the 14N(n,α)11B process whose cross section is higher than 14N(n,p)14C. The corresponding events appear at higher energies than the thermal neutron peak while events at lower energy are due to recoils induced by the elastic scattering of fast neutrons.

Future experiments may benefit from the capability of SPCs to discriminate 14N(n,p)14C from 4N(n,α)11B reactions via pulse shape discrimination. This is because the rise time of pulses depends on the radial length of the track, which is expected to be different for electrons, alphas and protons. Thereby, a statistical discrimination of thermal and fast neutrons (particularly useful for direct fast neutron spectroscopy) is in principle at reach. 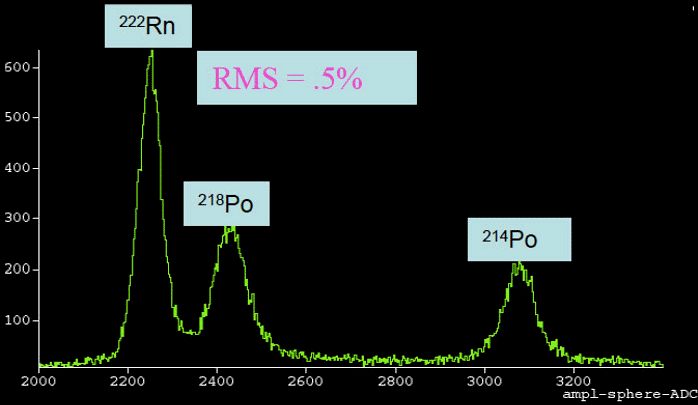 Gaseous spherical detectors are ideal for measuring very low concentrations of Radon in the air. 222Radon is an important background for SPCs as it follows a decay chain with multiple alpha emitters that ends in 210Pb. This radioactive isotope has a 23 year half life, making Radon an important background to eliminate. Due to the large volume of SPCs, the entire chain of decay has the potential to be captured within the volume.