Numerous observations and precise measurements from galactic to cosmological scales have led to the astonishing conclusion that ordinary matter -which includes stars, galaxies, and the human body- only accounts for 20% of the total matter content of the Universe. The missing mass consists of so-called dark matter which, while invisible, betrays its presence through gravitational effects on its surrounding environment. The earliest hints came from observations of the rotation speeds of stars in galaxies or galaxies in large galaxy clusters, both of which were observed to be too fast to be held together by the visible matter we can see. Further evidence from the Cosmic Microwave Background (the imprint of the Big Bang), gravitational lensing surveys, and observations of galaxy cluster collisions have all contributed to the growing consensus that the majority of the matter in our Universe has been completely hidden from us. Although we do not yet understand the exact nature of this mysterious dark matter, we do know that it must be invisible and abundant enough to account for these anomalous observations, but interact with ordinary matter rarely enough to elude detection until now. Not only would dark matter detection have fundamental consequences for particle physics, cosmology and astrophysics, it would also increase our understanding of the Universe to a new level, which is why so many experiments around the world are attempting to detect dark matter particles.

The missing mass consists of so-called dark matter which accounts for about 27% of the energy content of the Universe. 68% is made of an even more mysterious phenomenon referred to as "dark energy". Only 5% is ordinary matter. 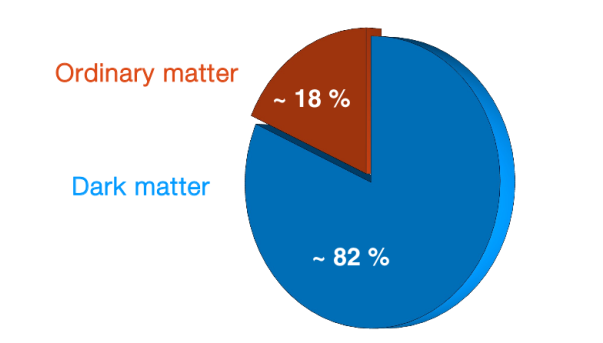 Ordinary matter - which includes stars, galaxies, and the human body - only accounts for about 18% of the total matter content of the Universe.

Direct detection experiments hope to detect incoming dark matter particles from the Milky Way halo through the signals they induce when they collide with nuclei of atoms from the detector material. Because dark matter particles rarely interact with ordinary matter, large detector masses together with long data-taking periods are required to potentially detect only a single event. Also, because detectors are not uniquely sensitive to dark matter particles, they have to be built with extremely radio-pure materials and enclosed in large shields to protect against internal and ambient radioactivity, respectively. In addition, experiments are located in deep underground facilities to use the earth as a shield against cosmic particles. Another fundamental challenge comes from the small amount of energy expected to be deposited (< 1 keV), which means that low energy detection thresholds are necessary. This pre-requisite becomes even more critical for light dark matter searches as low-mass particles are expected to deposit even less energy. While this prevents most experiments from being sensitive to low-mass candidates, Spherical Proportional Counters (SPCs) from the NEWS-G experiment have extremely low energy thresholds, and are thus well suited to look for light dark matter.

A favored hypothesis for the nature of Dark Matter is that it is composed of particles that are stable, non-relativistic, with a mass in the range of 1 to 1000 times that of a proton (1GeV to a few TeV), and that would neither emit nor absorb light (do not interact through the electromagnetic force). These particles would have been produced thermally in the early Universe and must have a relic abundance in accordance with precision cosmological measurements. In general, theoretical particle candidates with such properties are called Weakly Interacting Massive Particles (WIMPs). Although many different proposed particles could be suitable dark matter candidates, the particle that has received the most attention over the past decades is the Neutralino, a WIMP-like particle independently predicted by Super Symmetric Theory (SUSY), in a confluence known as the “WIMP Miracle”. However, as accelerator searches such as those conducted at the Large Hadron Collider (LHC) have yet to uncover signs of physics beyond the Standard Model, the hunt for dark matter has expanded to include more exotic possibilities and lighter dark matter candidates.

For example, new theoretical approaches such as asymmetric dark matter models have gained attention as in addition to predicting light dark matter particles, they also solve the matter-antimatter asymmetry problem. Another possible candidate is the Axion, which was first proposed by Peccei-Quinn theory to solve the issue of charge-parity violations in strong interactions as predicted by quantum chromodynamics. Axions are particles theorized to be stable, light, and to weakly interact with ordinary matter, making them an ideal candidate for dark matter. Kaluza-Klein theory also predicts axion-like particles, and may also explain long-standing anomalies in X-ray observations from cosmological sources. Some models predict that such particles could decay into two photons, a signature which for NEWS-G detectors are particularly well suited to identify.