A Spherical Proportional Counter (SPC) consists of a large copper vessel (up to 140 cm in diameter) filled with noble gas, with a small sensor (a few mm in diameter) at the center that is put to a high voltage in order to allow for charge collection.

Following a particle interaction, electrons from primary ionization drift towards the sensor in the low field region within a few 100 µs. When these primary electrons arrive in the amplification region, the electric field magnitude becomes so high that the electrons gain enough kinetic energy in-between collisions with gas molecules to trigger secondary ionizations. This generates an avalanche process (Townsend avalanche) which results in the creation of a few thousands of secondary electron-ion pairs for each primary electron reaching the amplification region. Counterintuitively, the secondary electrons- which are quickly collected on the sensor- barely contribute to the signal. The latter is almost entirely induced by the secondary ions as these drift back towards the vessel at ground. The current induced by the secondary ions is integrated with a resistive feedback charge sensitive preamplifier that basically provides us with a voltage output proportional to the integrated current.

Find here the internal technical note about the Pulse shape in the SPC prototype by J.Derré (PDF 3MB) (October 4, 2007).

In spite of the simplicity of its design, the SPC has many appealing features for light dark matter detection. This detector technology provides sensitivity to single electrons from ionization with energy detection thresholds as low as 10 eVee. This unprecedented sensitivity arises from a high amplification gain from the avalanche, combined with low electronic noise due to the low intrinsic capacitance of the detector. As a matter of fact, the latter doesn’t depend on the size of the sphere but only on the size of the sensor, which is a convenient feature for scaling up the size of the detector.

Additionally, the operation of the SPC with light noble gases such as H, He and Ne allows for an optimization of the momentum transfer for low-mass WIMPs. This results in light dark matter particles depositing larger amounts of energy in SPCs than in any other existing dark matter detector.

Furthermore, SPC technology offers a pulse-shape-based discrimination of surface events down to the lowest energies. This allows for rejecting a large fraction of background events originating from ineluctable radioactive contamination of the inner surface of the copper vessel.

Finally, because background and WIMP event rates evolve differently with the target atomic mass, the operation of the SPC with diverse noble gases allows for the discrimination of a potential WIMP signal from an unidentified background.

Following a particle interaction, primary electrons from ionization drift in the direction of the sensor in the low field region where they are subject to diffusion. This is responsible for a Gaussian dispersion in the arrival time of those primary electrons to the sensor, whose standard deviation is proportional to the distance from the sensor to the event. This translates into pulses exhibiting longer rise times for energy depositions occurring farther away from the sensor. To illustrate the pulse-shape-based discrimination of surface events, we show in the figure below the distribution of rise time and energy of simulated low energy surface events and bulk events in SEDINE, an SCP detector used to search for dark matter at the LSM. 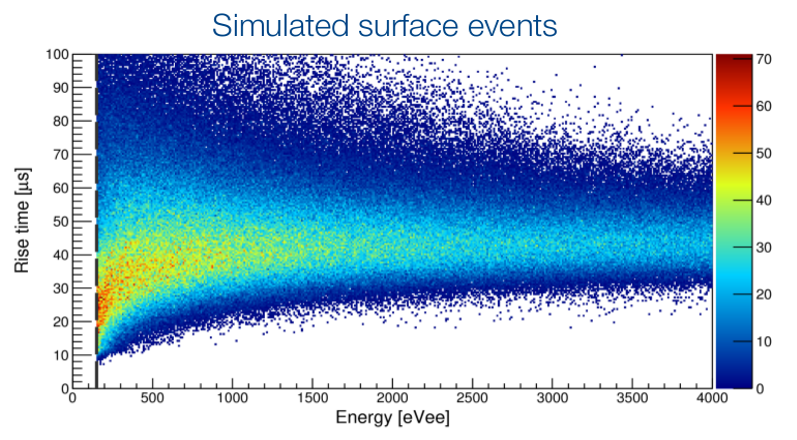 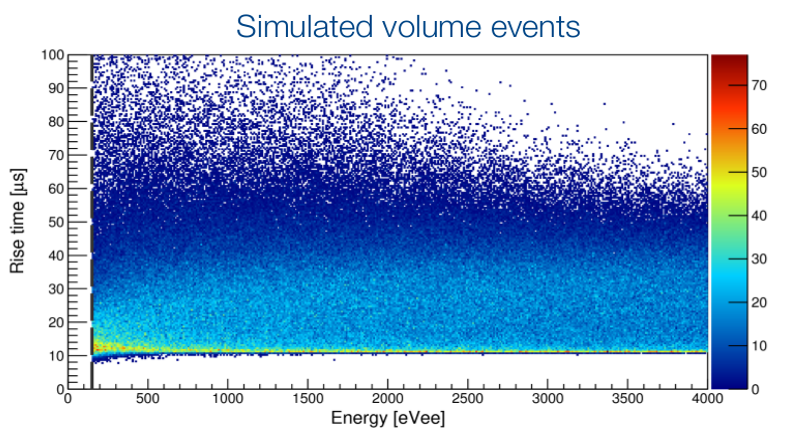 Particles such as muons and alphas, do not lead to point-like interactions but instead leave ionization tracks in SPCs. This means that the primary electrons start to drift in direction of the sensor from different distances. Because the typical drift time (100’s of us) is larger than the dispersion in the arrival time due to diffusion (10’s), this gives rise to pulses with higher rise times than point like interactions. As a matter of fact, the rise time of pulses depends on the orientation of the track in such cases.

For tracks oriented along the sensor, part of the electrons will start their drift from the surface of the SPC while others will only have a few cm to drift before reaching the sensor. As a result, pulses associated with such events exhibit long rise times typically corresponding to the difference in drift time between the electrons created closer and the farther away from the sensor.

For tracks that are tangential to the surface and originating from the inner surface, all the electrons start their drift at a similar distance from the sensor, such that the rise time of the associated pulses will be similar to that of point-like surface events.

Ultimately, an electronic/nuclear recoil discrimination is feasible with this detector technology. However, this requires operating the SPC at low pressures (~100 mbar) such that electron interactions give rise to sizeable tracks. In such an operating mode, nuclear recoils induced by dark matter particles will still lead to point-like energy depositions while the discrimination of track-like electronic recoils will allow for a rejection of the associated radioactive background.