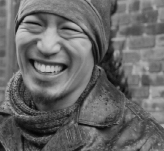 My time studying Fine Art at Queen's University will always have a special place in my heart. Within the walls of Ontario Hall, there lived an incredible community of people who nurtured me as an artist. A mixture of passionate expression, technical refinement and critical thinking shaped my understanding of Art. These same things continue to inform how I live my life today. I was blessed to have had the privilege of studying here.

After graduating from Queen's University in 2001, I continued my studies at Sheridan College earning a Post-Graduate Certificate in Computer Animation in 2002 followed by a Post-Graduate Certificate in Digital Effects in 2003. By September of that year, I had moved to the United Kingdom to begin my digital artist career in post-production of the feature film industry, with a specialty in creating 2D and 3D digital environments.

In the UK, I worked at London's historic Ealing Studios until 2004, helping to produce the UK's first animated feature film. In 2005, I continued my career at one of Toronto's largest visual effects companies - Mr. X Inc. - where I assisted in creating over a dozen feature films for them. I spent some time working between Toronto and Vancouver until 2008 when I joined Australia's largest visual effects company - Animal Logic. I worked in Sydney for 2 years before migrating to Singapore and joining the Southeast Asian branch of Lucasfilm - one of the world's most prestigious post-production companies. By 2012, I returned home to Canada where I continue to create computer graphics for the entertainment industry.

See a list of films that Fred has worked on at IMDb.

Even though I knew that I wanted to be an artist from the beginning, one of the many reasons I chose Queen's over an art school was that Queen's allowed me the opportunity to study philosophy along side my study of art and art history. Sometimes, in art school, we get so focused on art and knowing and studying everything we can to be the best in art, that we forget there is a whole big world out there that is more important and more related to art than just art itself. For me, Queen's Fine Art program kept it real. Did we love art? Yes. Did we love making art, and the expression that art gave us? Very much. Did we worry so much about memorizing the work of every contemporary artist and what context they put us in? Not so much. Queen's Fine ARt was more about developing our own individual skills and insights as artists, allowing us to educate ourselves and develop our perspectives and voices as our interests led us. For me, the driving force was philosophy, for others science, or business. The freedom and opportunity I had at Queen's helped me shape my visual language and was crucial to the content of my work today. Rather than going to a school where ideas are given to a student, I made the right choice going to Queen's, where the teaching methods sought to inspire their students to search and to find the ideas within themselves.

After graduating from Queen's in 2012, I moved to the San Francisco Bay Area to complete a Masters of Fine Art in painting at the San Francisco Art Institute. During my time there, I studied contemporary art theory and criticism, received an almost inhumane amount of criticism on my own work from teachers and peers, and built up a very thick skin. I won a scholarship and award called, the Murphy Cadogan Contemporary art award, and had my first show in San Francisco at a cultural centre called SOMArts. Upon graduating from SFAI in 2014, I received the highest award, the Headlands Centre for the Arts Graduate Fellowship Award. This entailed a year long residency, which I am currently still enjoying, and a show at the end of the year (May 9 2015) at the Headlands Centre for the Arts, in Sausalito, California. In the summer, I am also very excited start teaching public education classes in drawing at SFAI. I am still at the beginning of my career, so there's still lots of hard work still to follow, but I am very grateful for the opportunities I have had so far.