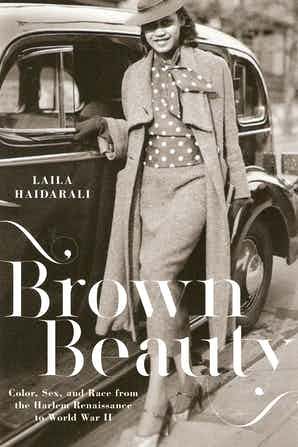 Examines how the media influenced ideas of race and beauty among African American women from the Harlem Renaissance to World War II.

Between the Harlem Renaissance and the end of World War II, a complicated discourse emerged surrounding considerations of appearance of African American women and expressions of race, class, and status. Brown Beauty considers how the media created a beauty ideal for these women, emphasizing different representations and expressions of brown skin.

Haidarali contends that the idea of brown as a “respectable shade” was carefully constructed through print and visual media in the interwar era. Throughout this period, brownness of skin came to be idealized as the real, representational, and respectable complexion of African American middle-class women. Shades of brown became channels that facilitated discussions of race, class, and gender in a way that would develop lasting cultural effects for an ever-modernizing world.

Building on an impressive range of visual and media sources—from newspapers, journals, magazines, and newsletters to commercial advertising—Haidarali locates a complex, and sometimes contradictory, set of cultural values at the core of representations of women, envisioned as “brown-skin.” She explores how brownness affected socially-mobile New Negro women in the urban environment during the interwar years, showing how the majority of messages on brownness were directed at an aspirant middle-class. By tracing brown’s changing meanings across this period, and showing how a visual language of brown grew into a dynamic racial shorthand used to denote modern African American womanhood, Brown Beauty demonstrates the myriad values and judgments, compromises and contradictions involved in the social evaluation of women. This book is an eye-opening account of the intense dynamics between racial identity and the influence mass media has on what, and who we consider beautiful.