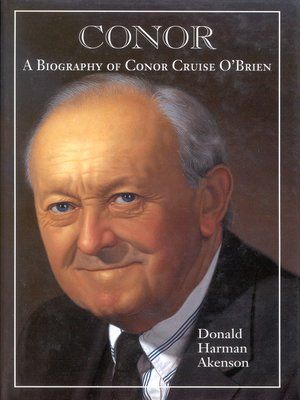 “Man of letters, diplomat, scholar” the only contemporary writer who can be compared to George Orwell and André Malraux that is how the Atlantic Monthly described Conor Cruise O'Brien on its January 1994 cover. If anything, that description underestimates the range of talents and activities of the person who has been widely referred to as “the greatest living Irishman.”

The career of Conor Cruise O'Brien reads like the work of several people, not just one. Having served as a diplomat under Sean MacBride, he came to world prominence as special representative to Dag Hammarskjold, Secretary General of the United Nations, in the then-Congo. Squeezed ruthlessly by big-power politics, he resigned and wrote To Katanga and Back (1962), a classic in modern African history and still the only book to get behind the polished marble façade to reveal how the United Nations works.

O'Brien then became Vice-Chancellor of the University of Ghana, and battled for academic freedom against one of the most amiable of tyrants, Kwame Nkrumah. He moved on to become the first incumbent of the Schweitzer Chair at New York University. His relations with the “New York intellectuals” of the time were productive, acrimonious, sometimes comic - and part of a central chapter in the intellectual history of America in the 1960s.

From 1969 to 1977 O'Brien was probably the most hated person in Ireland, as well as one of the most heroic. One of the first to see the fascistic nature of the Provisional IRA, he began an unrelenting campaign against its terrorism. In that campaign he called into question the basic myths upon which the Irish republic was constructed. His States of Ireland (1972) is the most publicly influential piece of Irish historical writing since John Mitchel's The Last Conquest of Ireland (1860), and many students of Irish history believe that O'Brien's work in the 1970s was crucial to averting civil war in Ireland.

Whatever one thinks about this extraordinary man, one cannot ignore him. He may well be the most important Irish nonfiction writer of the twentieth century, with writings as widely scattered as they have been influential.

Volume I, Narrative is the biography of one of the most controversial, engaging, and courageous individuals of this century. Volume II, Anthology brings together his best short pieces, many of which originally appeared in such periodicals as the Spectator, the New Republic, Harper's, the Atlantic, the New Statesman, the Observer, and the New York Review of Books and have never been reprinted. A complete bibliography of O'Brien's work is also provided.