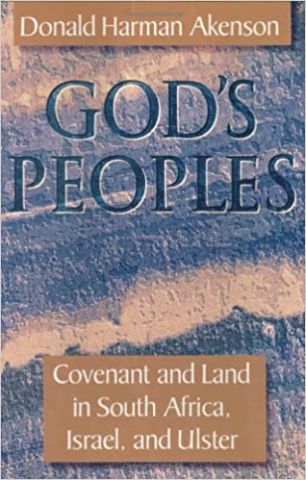 In this original and unsettling book, Donald Akenson brings to light critical similarities among three politically troubled nations. He suggests that developments in Northern Ireland and South Africa since the seventeenth century -- and in Israel during the twentieth -- must be understood in relation to events that occurred four millennia ago. Asserting that the dominant peoples of these three nations have based their cultural identity on belief in a direct covenant or contract with an all-powerful, all-knowing God, Akenson vividly chronicles the profound effects of this conviction on each nation's tempestuous history.

To see the Voortrekker monument in Pretoria is to recognize at once that it was built to humble the observer. With walls as thick as parts of the Maginot Line, and ambushments that would do credit to a medieval fortress, this South African national museum would serve equally as well as a defensive outpost. What mentality would create such an imposing structure? We can find the same outlook half a world away in the fortified homesteads that Ulster-Scots built to protect themselves against indigenous Catholics, and in the military settlements of West Bank Israeli farmers.

Akenson first examines how the pattern of relations between God and the Prophets recorded in the scriptures became the template for all three cultures. He identifies several beliefs which are common to Afrikaners, Israelis, and Ulster-Scots: devotion to an anthropomorphized and warlike God, belief in the threat of an external enemy, commitment to a particular land and to the legacy of an “Exodus” experience, belief in the importance of social law, and acceptance of an ethos of group purity. He then reconstructs the preconditions of a covenantal culture, showing how each nation became fully covenantal only after it was able to take control of the state with the Partition of Ireland in 1920 and the independence of the Republic of South Africa and of Israel in 1948. Turning to recent political history, he considers the strategies each of the peoples used to secure its status, varying from diverse forms of preference to, in the case of apartheid, formal exclusion of non-covenantal peoples. Akenson also assesses the future prospects of these societies, identifying a gradual dissolution of the covenantal mindset in individuals in contemporary South Africa and Northern Ireland. However, in the land whose people first sketched out the notion of covenant in the late Bronze Age, he detects no softening of the adamantine commitment to its fulfilment.

God's Peoples will be vital reading for anyone concerned with issues of human rights and religious freedom, including policy makers, cultural and religious historians, sociologists, social psychologists, political scientists, and others interested in the histories of South Africa, Northern Ireland, and the Middle East.