Reimagining Politics after the Terror: The Republican Origins of French Liberalism 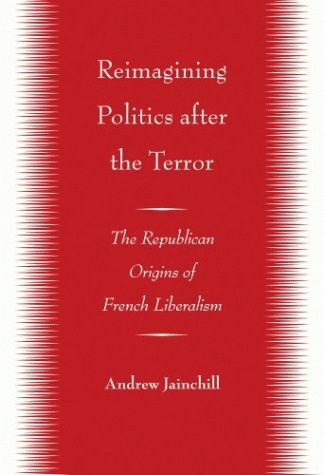 In the wake of the Terror, France's political and intellectual elites set out to refound the Republic and, in so doing, reimagined the nature of the political order. They argued vigorously over imperial expansion, constitutional power, personal liberty, and public morality. In Reimagining Politics after the Terror, Andrew Jainchill rewrites the history of the origins of French Liberalism by telling the story of France's underappreciated “republican moment” during the tumultuous years between 1794 and Napoleon's declaration of a new French Empire in 1804.

Examining a wide range of political and theoretical debates, Jainchill offers a compelling reinterpretation of the political culture of post-Terror France and of the establishment of Napoleon's Consulate. He also provides new readings of works by the key architects of early French Liberalism, including Germaine de Staël, Benjamin Constant, and, in the epilogue, Alexis de Tocqueville. The political culture of the post-Terror period was decisively shaped by the classical republican tradition of the early modern Atlantic world and, as Jainchill persuasively argues, constituted France's “Machiavellian Moment.” Out of this moment, a distinctly French version of liberalism began to take shape. Reimagining Politics after the Terror is essential reading for anyone concerned with the history of political thought, the origins and nature of French Liberalism, and the end of the French Revolution.