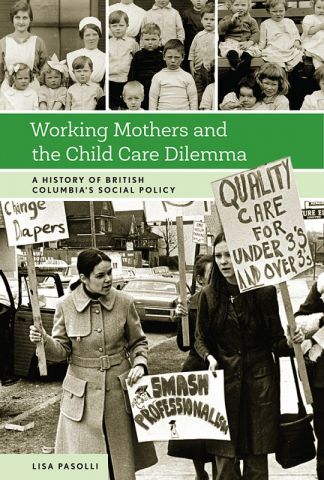 Finding affordable, quality child care is a challenge for many Canadian families. In some areas of British Columbia, expectant mothers place their children on daycare waiting lists months before they are born. Yet, despite the demand, recent efforts to achieve a universal child care program have stalled. As Working Mothers and the Child Care Dilemma demonstrates, this is nothing new: child care policy in British Columbia has matured in the shadow of a persistent political uneasiness with working motherhood. Charting the growth of the child care movement in this province, Lisa Pasolli examines the arrival of Vancouver’s first crèche in 1912, the teetering steps forward during the debates of the interwar years, the development of child care policy, the rebellious advancements of second-wave feminists in the 1960s and 1970s, and the maturation of provincial and national child care politics since the mid-70s. In addition to revealing much about historical attitudes toward women’s roles at home and in the workplace, Working Mothers and the Child Care Dilemma celebrates the efforts of mothers and advocates who, for decades, have lobbied for child care as a central part of women’s rights as workers, parents, and citizens.