The position of Rector is unique to Queen's among all Canadian universities. 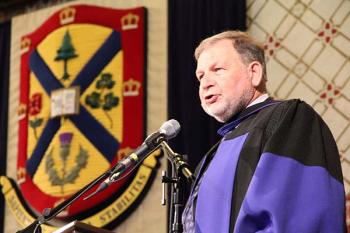 Traditionally, the four ancient Scottish universities had Rectors whose duties have not changed much since the position was created in the fifteenth century. Those universities are Edinburgh, Glasgow, St. Andrews and Aberdeen.

The Rector tradition was passed to us at Queen's from our sister university, the University of Edinburgh, with the first Rector taking office in 1913. The Rector of Queen's is the third officer of the University, after the Chancellor and Principal.

The primary function of the Rector is to represent students on the Board of Trustees, although many Rectors have used the office in a more informal way to help students with administrative problems, providing information and advice.

The Rector also has certain ceremonial responsibilities, the most important of which is to join the Chancellor and the Principal on the dais at Convocations. The rector is frequently called upon to represent students on University committees such as those which select the Principal and honorary degree recipients.

The Rector has always been elected by students to a three-year term, but until 1969 no students were chosen; instead, the Rector tended to be some prominent friend of Queen's, such as the senior public servant O.D. Skelton (1929-1935), former Prime Minister R.B. Bennett (1935-1937), and the businessman and chair of the CBC, Leonard Brockington (1947-1968).

In 1969, students in that age of activism forced the resignation of the Rector, Senator Grattan O'Leary, and students have been elected to the post ever since.

Of High and Low Professions, Rectoral Address by B.K. Sandwell, L.L.D. on December 8, 1944

Rector's Badge
Election of the Rector
History and Past Rectors