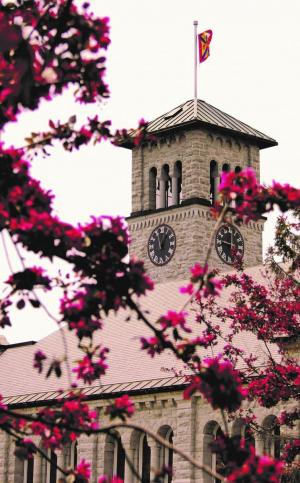 RAQ offers an interesting and popular speakers’ series at the University Club for RAQ members and guests, from September to June each year. The Lunchtime Guest Speaker Series, is an informal discussion over lunch with an invited speaker.

Currently, we offer live in-person as well as the option to join the event via Zoom.  The in-person events follow Queen's and the University Club's COVID protocols.  Reservations are required for each format.

Many of us know Dr. Anne Godlewska as Head of the Department of Geography or as Associate Dean, Arts and Science, or through her several areas of academic research. These included the history of mapping and extensive work concerning the native populations of Canada and the United States and their ongoing struggle with colonial characterizations and interests. Anne has recently retired and can now indulge and share with us her fascination with chocolate, its genetics, history and geography of cultivation, political geography of production and consumption, the apparently corrupting nature of chocolate and, of course the demanding mechanics of production from bean to bar.

May 26, 2022 - Dr Rebecca Manley Chair, Department of History: Russia’s War in Ukraine: The Use and Abuse of History

Dr. Rebecca Manley specializes in the history of Russia and the Soviet Union. She is well known for a prizewinning book To the Tashkent Station: Evacuation and Survival in the Soviet Union at War, 1941-1946. Based on archival collections in Russia, Ukraine, and Uzbekistan, it examines a war that transformed the lives of several generations of Soviet citizens. She is currently working on a SSHRC project examining the conceptions and political ideas that determined how Russians responded to hunger from the 1860s through to the collapse of the Soviet Union, offering a fresh perspective on the place of hunger in modern Russian history.

May 12, 2022 - Audrey Kobayashi:  Access to housing in Vancouver's Downtown East Side: love in a time of COVID.

Dr. Kobayashi has been working in the Downtown East Side of Vancouver, the original Japanese Canadian community that was uprooted in the 1940s, for 40 years. Ten years ago, she teamed up with fellow geographer Jeff Masuda and a large team of participant researchers to advocate for improved housing in the single room occupancy buildings. Then COVID struck. This is the story of how residents in this already precarious community rallied to provide services that were suddenly withdrawn.

Thursday, April 21, 2022 with Dr. Adnan A. Husain, Queen’s Department of History and Director, School of Religion The Formation of a Crusading Society: The Shared Medieval Roots of Islamophobia and Antisemitism.

Dr. Adnan Husain will enhance our understanding of Islamophobia and antisemitism by bringing a historical perspective to their shared medieval roots. Dr. Husain is a historian of Medieval Mediterranean and Islamic World History specializing in the cross-cultural and inter-religious relations among Christians, Muslim, and Jews. He is currently Director of the School of Religion and has overseen The Muslim Societies-Global Perspectives Project at Queen’s University since 2011 (https://www.queensu.ca/msgp). He hosts its podcast, The Majlis (https://anchor.fm/the-Majlis), and is co-host of Guerrilla History podcast, https://guerrillahistory.libsyn.com. We look forward to his presentation.

Other recommended reading on this topic:

Link to the Recording

We are delighted to have Dr. Schüklenk present on such an important current topic. He is well known to us as he previously presented, Medical Assistance in Dying – Canada. He is Professor of Philosophy at Queen’s where he holds the Ontario Research Chair in Bioethics. Dr. Schüklenk’s main research focus is on ethical and policy issues in the context of public and international health. His vast international experience includes teaching in universities in Germany, Australia, South Africa and the UK, and he currently is Honorary Professor at both Witwatersrand University, Johannesburg and Wenzhou Medical University, Wenzhou. A long-time Editor in Chief of Bioethics and the Founding Editor and Editor in Chief of Developing World Bioethics, he is currently working on a volume titled Global Health Ethics. We look forward to his presentation.

Dr. Wendy Craig is Professor in the Department of Psychology at Queen's University. She is a leading international scientist and expert on bullying prevention and the promotion of healthy relationships. As co-founder and Scientific Co-Director of PREVNet (Promoting Relationships and Eliminating Violence Network), she has transformed the science of bullying and healthy relationships into evidence-based practice, intervention, and policy. Her secondary area of research is on teen dating violence and leads a Community of Practice of 21intervention projects addressing teen dating violence.

Among other activities, she has worked with the World Health Organization, UNICEF, is the Co-Director of an international Bullying Research Network, and acts as an advisor to Canadian government ministries. Dr. Craig has won numerous awards including the Canadian Psychological Association Award for Distinguished Contributions to Community Service, the Queen’s Excellence in Research Prize, the Order of Ontario, and the Order of Canada.

A spotlight the Dunin-Deshpande Innovation Centre (DDQIC), with presentations by Program Managers Joanna Tinus and Chloe Beisheim, along with Dr. Wiley Chung, co-founder of the 2021 Summer Pitch Grand Prize award-winning entrepreneurial team, Smart Biomedical. Dr. Chung talks about an innovative treatment for lung collapse, a potentially fatal condition that can occur either spontaneously or due to trauma. The innovation is expected to save lives and healthcare resources. The DDQIC’s many projects involve 30 Queen’s departments and are directed to building a culture of innovation and entrepreneurship on campus. A major annual event is the Summer Pitch Competition which awarded a total of $100,000 to winning teams in 2021.

Dr. Power shares her insights on the important topic of basic income. Her research at Queen’s lies at the intersection of food, poverty and public health. Drawing on the sociology of food, health, and consumption as well as the sociology of childhood and cultural studies, she explores social, cultural, political and symbolic aspects of food, eating, the body, and health using quantitative methods. Dr. Power’s research focusses on food insecurity and the experiences of people living in poverty. For many years, she taught HLTH 101, The Social Determinants of Health, at Queen’s and in that course, thousands of students learned the impacts of poverty, racism, and colonialism on health. She co-founded the Kingston Action Group for a Basic Income Guarantee and is the co-author, with Jamie Swift, of the new book, The Case for Basic Income: Freedom, Security, Justice.

Dr. Metcalf’s research as a legal scholar draws on her graduate training in economics. She received a grant from the Canadian Foundation for Legal Research for “Climate Change and Canada’s Constitution”.  The research project considers how the country’s constitutional structure can impact its prospects for effective climate action and investigates Canada’s legal options for climate action by considering how the federal division of powers affects its ability to introduce effective climate policy. Dr Metcalf stresses that that Canada needs “to make hard choices with significant economic consequences” and “to build sustainable public engagement and consensus to have effective action on climate change.”

The Politics of Immigration in Canada. What’s Going On?

Dr. Banting is well known in the Queen’s community for his administrative leadership as well as his extensive work on public policy in Canada and other contemporary democracies. With a long-standing interest in the politics of social policy, his research includes ethnic diversity, immigration and multiculturalism. He is the author and editor of over 20 books, including Poverty, Politics and Policy and The Welfare State and Canadian Federalism. With John Myles he edited Inequality and the Fading of Redistributive Politics and Framing the New Inequality: The Politics of Income Redistribution in Canada, and with colleagues co-edited Income Inequality: the Canadian Story.