Nestled in the heart of Queen's University Discover | Queen's University (queensu.ca) and bolstered by the outstanding reputations of its scholars and researchers,the Donald Gordon Hotel and Conference Centre (DGHCC) combines the amenities of a full-service conference and event Centre with the elegance and charm of Kingston’s historic limestone architecture.

As an IACC-certified venue, the DGHCC goes beyond the norm regarding service standards. Our dedicated and professional staff collaborate with you every step of the way to ensure an unforgettable experience and will leave a profound impact on attendee. The emphasis is not only on the quality of our meeting-focused venue but the quality of the outcome of your meeting, making the Donald Gordon Hotel and Conference Centre distinctly different from other meeting venues.

Everything you need, in one ideal location: 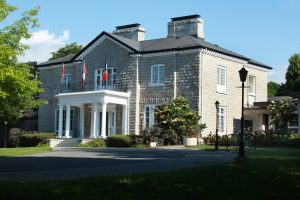 The Roselawn House was built in 1841 by David John Smith, who resided at the property until he died in 1848. The house was bought at auction by Henry Smith Jr in 1851. Smith sold in 1888, and Roselawn remained in private hands until 1948. From 1948 to 1969, it was the official residence of the Commandant of the National Defense College until Queen’s University acquired it. After extensive renovations, the building reopened in 1974 as the University’s Centre for Continuing Education. The facility now operates as the Donald Gordon Hotel and Conference Centre.

Below is an excerpt from The Old Stones of Kingston, Its Buildings Before 1867 by Margaret Angus

“In 1841, David John Smith, a lawyer and son of a pioneer merchant, bought three lots from Queen’s College and built an elegant country home. It was a fashionable area, north of the Governor General’s residence and near where the College had a site. A few years later, falling land values, foreclosures and builders’ demands for payment caught rich and poor alike, and Smith had to mortgage Roselawn to meet his debts.

When he died in 1848, Smiths’ executors put the big house up for auction, but the sale was not closed until 1851 when it was bought by Henry Smith Jr, a lawyer who later became Solicitor General and Speaker of the House, and was knighted in 1860. In 1888, the Smith heirs sold Roselawn and it remained in private hands for many years.

From 1948 to 1969, it was the official residence of the Commandant of the National Defense College, and senior officers from the services of Canada and her allies were entertained in its gracious rooms. Big trees and a ‘wide expanse of green lawn’ still surround Roselawn. A long high stone wall extends from the west side of the house to an archway that gives access to the yard where stone outbuildings once stood.

A wide veranda which ran across the front of the house until about 1960 has been replaced with a smaller portico and a screened area to the east side. The classical doorway opens into a wide hall, and fine stairs are lit by a large Venetian window. Roselawn has retained its elegance both inside and out.”

In 1970, Queen's University acquired Roselawn initially selling the land to Smith in 1841.

After extensive renovations and additions, the building officially opened in November 1974 as the University’s Centre for Continuing Education.

Roselawn House is now the iconic central building of the Donald Gordon Hotel and Conference Centre.

Born in Scotland in 1901, Gordon emigrated to Canada in 1914 and settled in Toronto.  After leaving school at the age of 14, he held various jobs until he accepted work at the bank of Nova Scotia.

Over the next several years, Gordon attended night school and worked his way up the ranks in the Bank of Nova Scotia. Appointed Secretary of the Bank of Canada in 1935, he moved on to become the Chairman, President and Director of the CN Railways and the Director of Air Canada spanning throughout the 1950s and 1960s.

Gordon’s association with Queen’s extended over four decades. In 1947 the University conferred an Honorary Degree of Doctor of Laws on him, and in 1951, the Board of Trustees elected him to the Board. He was appointed to the Executive Committee in 1964 and was a member of the Finance Committee from May 1965 until he died in 1969.

In 1914 the Gordon family emigrated to Canada and settled in Toronto where Donald got a job in a box factory for a short time before being sent to Manning Avenue School. When he reached the legal school-leaving age of fourteen, he began work as a blacksmith’s helper. He worked as an electrician’s helper and a magazine delivery boy during the next two years. In 1916 Gordon accepted a job at the bank of Nova Scotia in Toronto.

Over the next seven years, Gordon spent five of those years at night school. He took commercial correspondence and extramural courses at Queen’s University and earned the equivalent to a degree in Economics as a Fellow of the Canadian Bankers’ Association.

In February 1935, Gordon got appointed as the Secretary of the Bank of Canada on its establishment. Becoming Deputy Governor of the Bank of Canada in 1938, hethen served as chairman of the Wartime Prices and Trade Board. Between November 1941 to April 1947, Gordon was  was appointed Director of the Industrial Development Bank on its creation in 1944.

After he resigned from the Wartime Prices and Trade Board, he returned to the Bank of Canada and the Foreign Exchange Control Board. In 1948 he was appointed Executive Director of the International Bank for Reconstruction and Development.

On January 1, 1950, Gordon became Chairman, President and Director of the Canadian National Railways, which he held until 1966. He was also Director of Air Canada from 1950 until 1966. In 1967 he became President of British Newfoundland Corporation Limited (Brinco) and Chairman of Churchill Falls (Labrador) Limited, A Brinco subsidiary.

Donald Gordon’s association with Queen’s University extended over four decades. It began with his enrolment in the courses in Banking. In 1947 the University conferred an Honorary Degree of Doctor of Laws on him. In 1951, the Board of Trustees elected him to this Board. Appointed to the Executive Committee in 1964 Gordon was also a member of the Finance Committee from May 1965 until his death. He was highly effective in helping to raise funds for Skelton-Clark Foundation and was indefatigable in his work of soliciting “special names” in the Capital Appeal of 1964. The University has honoured Mr. Gordon by naming a residence “Donald Gordon Hall” and also the “Donald Gordon Hotel and Conference Centre.”