Zoe Whittall, author of The Best Kind of People

Shortlisted for the Scotiabank Giller Prize

A Reading and Q&A

Zoe's first novel, Bottle Rocket Hearts, was named a Globe and Mail Best Book of the Year and one of the top ten essential Canadian novels of the decade by CBC's Canada Reads. She won the Writers' Trust of Canada's Dayne Ogilvie Grant for best gay emerging writer in 2008.

Holding Still for as Long as Possible, Whittall's second novel, was published in 2009 in Canada and 2010 in the United States. It's been optioned for film, and was shortlisted for the 2010 ReLit Award. It was also an honour book for the American Library Association's Stonewall Book Award in 2011, as well as winning a Lambda Literary Award. In 2010 she published a short novella for Orca Books' Rapid Reads series called The Middle Ground, a book for adults with low literacy skills.

Her poetry books include The Best Ten Minutes of Your Life, The Emily Valentine Poems and Precordial Thump.

Presented by Creative Writing at Queen's.

Special thanks to Canada Council for the Arts. 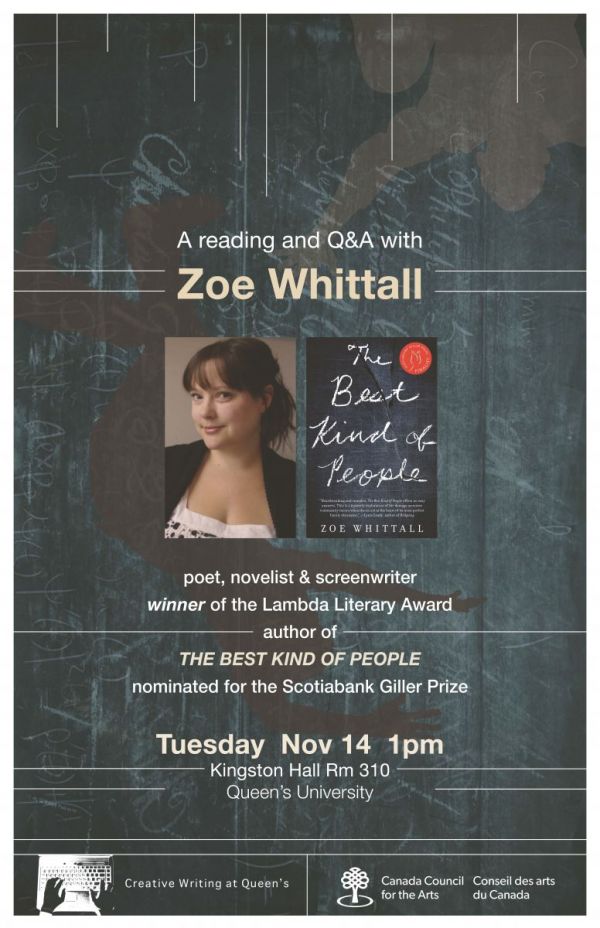