Research Forum 3: The CGIT and Constructing National Girlhood through Booklists

The Department of English is excited to host two folks from the Queen’s English and Language Literatures, Associate Professor Brooke Cameron, and Doctoral Candidate  Alicia Alves for our third and final research forum of the Fall Term.

All members of the Department of English are welcome to join us for this in-person event on Tuesday, November 23rd in Watson Hall Room 517 from 2:30-4pm!

For those outside of the Department or English or unable to attend in person, please register in advance for the Zoom meeting. After registering, you will receive a confirmation email containing information about joining the meeting.

The talk examines the cultural ideology and writing of the early Canadian Girls in Training (CGIT) manuals. They are interested in the formation of the CGIT as a response to, and critical rejection of, the colonial ideology underwriting the importation of the Girl Guide movement to Canada. Founding members of the CGIT believed that the British Girl Guide model brought to Canada placed too much emphasis on loyalty to empire and the dissemination of colonial ideas.  Instead, Canadian guides decided to form their own girls’ organization, the CGIT, and through it, to champion a distinctly nationalist (not imperial) identity for future female citizens and community leaders.

Brooke Cameron is Associate Professor of English at Queen’s University in Kingston, Ontario. She is the author of Critical Alliances: Economics and Feminism in English Women’s Writing, 1880-1914 (University of Toronto Press, 2020), as well as multiple peer-reviewed articles and book chapters on gender and economic themes in Victorian literature.

Alicia Alves is a doctoral candidate in the English Department at Queen’s University. Her dissertation works on human-animal kinship and hybridity, as well as the intersections between childhood studies, animal studies, and queer theory in late-Victorian and Edwardian children’s literature. 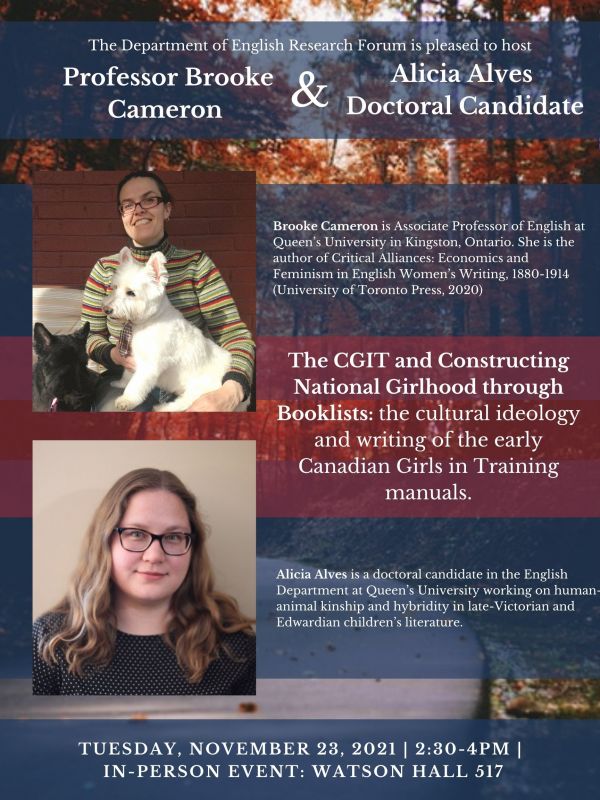