A trio of women scholars will begin their retirements on July 1, 2021, after decades of service to the Department of English at Queen’s University.

Professors Maggie Berg, Shelley King and Patricia Rae have made incredible contributions to the department during their careers and have inspired countless undergraduate and graduate students.

As they transition to professors emeritae, we take a moment to reflect on their outstanding accomplishments, relentless dedication and enduring legacies.

“The university feminist community was having conversations almost like to the ones taking place now in the BIPOC community about the challenges of inclusiveness and changing the curriculum,” said Berg, whose research focuses on gender and sexuality and human-animal studies.

“I became pregnant a year after being offered my position, and I did not take maternity leave because I was afraid that I would be perceived as not taking my job seriously.”

Berg has observed tremendous change within the department since that time. After a year of remote delivery, the contrast in technology between now and when she first started is staggering. “I did not own a computer; the administrative assistants typed up everything, including our exams; memos from the head were on paper, in mailboxes,” said Berg.

A dedicated teacher, Berg has been honoured with numerous teaching awards, including the Chancellor Charles Baillie Award, and a nomination for the 3M National Teaching Award.

“The highlight of my career was winning the W.J. Barnes Award for teaching excellence three times — it meant so much to me because it is entirely student driven,” said Berg. “I have always been a nervous teacher, so the awards meant more than I can say.”

Berg has been particularly thankful for her connection to the Centre for Teaching and Learning — as a result of winning the chair of teaching and learning in 2009 - 2012— where she found a community of people passionate about pedagogy.

Her research is equally renowned. Berg’s book, The Slow Professor, co-authored with Barbara Seeber and published in 2016 with the University of Toronto Press, has received international recognition and was named book of the year in Times Higher Education. “The success … was astounding to us,” said Berg. “The book — about resisting the corporate university with strategies from the Slow movement — hit a nerve.”

“My plans for retirement?  I have a lengthy book on the Brontës to finish; and I am still supervising some wonderful graduate students whose dissertations are fascinating. I find it difficult to let go of the academic work!”

“I feel so fortunate to have had wonderful, smart and supportive colleagues!”

“For me retirement means the completion of what has been, in the end, a very satisfying professional journey,” said King, whose research encompasses romantic, Victorian and Edwardian literature, as well as transhistorical children’s literature and contemporary fantasy.

Prior to joining the department as an adjunct in 1991, King completed a master’s in English and history at McMaster University. She went on to complete her doctorate at the University of Toronto, specializing in Victorian literature.

“Being a woman scholar in the 90s was a mixed experience,” said King “When I had my first meeting with the acting head…I was assured that it would be ‘fine’ if I wanted to teach women writers on my Victorian Lit course. And I of course was wondering inside why on earth it wouldn’t be.”

King was grateful for a few established women colleagues in the department, including Cathy Harland and Elizabeth Greene. She also joined the department at a time of change, where recent appointments — including Sylvia Söderlind, Patricia Rae, Elizabeth Hanson, and Maggie Berg —“represented a clear transition to a more gender-balanced department.”

In 2010, King was appointed a full professor under a clause that allowed adjuncts with sufficient published research and who had also maintained 12 years of service to be appointed at rank with tenure.

“Three years later I was appointed head of the Department of English — something that was unimaginable when I arrived thirty years earlier,” said King.

“That unexpected recognition of my scholarship was welcome confirmation of my strengths as a critic,” said King.

Her publication, The Collected Poems of Amelia Alderson Opie, which she co-edited alongside Professor John Pierce, remains her “most cherished contribution to scholarship.”

“While I can happily imagine leaving behind committees and meetings, it is much harder to think about leaving behind teaching and research,” said King, who looks forward to embarking on a long-anticipated digital humanities project: a web-based edition of the correspondence of Amelia Opie with her cousins, RA Henry Perronet Briggs and his wife, based largely on letters held in the Huntington Library.

“But then there will also be the call of the paeonies and listening to the bird song in my garden.”

“My connection to Queen’s English department goes back a very long way – to being a teenager!” said Rae, who completed her Bachelor of Arts at Queen’s in the 1973.

“This department was where I first discovered literature and determined that I wanted to spend my life studying and teaching it.”

An award-winning modernist scholar, Rae has published books and articles on modernist poetry and pragmatist philosophy, including The Practical Muse, and on the theory and practice of mourning, including Modernism and Mourning. In recent years, her research has focused on rereading the works of George Orwell through the lens of literary modernism.

Her substantial monograph on Orwell is nearing completion, and she is editing a volume of essays on new approaches to teaching his work.  She has also published widely on the literature and culture of the Spanish Civil War and is an enthusiastic participant in the SSHRC-funded Canada and the Spanish Civil War Project.

“Throughout my graduate studies at Oxford, my dream was to return to Queen’s to teach and I got my wish.”

Rae made history in 2002 when she became the first woman to serve as head of the department.

“The headship is never an easy job,” said Rae. “I was an associate professor and a fairly new mother at the time and the combination was, let’s just say, stressful.  However, the amazing team of secretaries who really ran the department — Karen Donnelly, Sherril Barr, and Kathy Goodfriend — made everything infinitely easier than it would otherwise have been.”

During her tenure as head, Rae prioritized hiring faculty and growing the reach of the blossoming creative writing program.

“Like every head, I did my best to defend the kind of work we do in the humanities — the labour-intensive work of doing solid research, the equally demanding work of teaching and marking stacks of essays — to the powers-that-be.”

“I think of myself as retiring from teaching but not from research,” said Rae, who will concentrate on completing her book projects and some commissioned essays on Orwell.

“I’ll miss our wonderful students and the alchemy of the classroom more than anything.”

As these scholars begin their retirements, please join the department in thanking Berg, King and Rae for their service and wishing them the best for the next chapter of their lives. 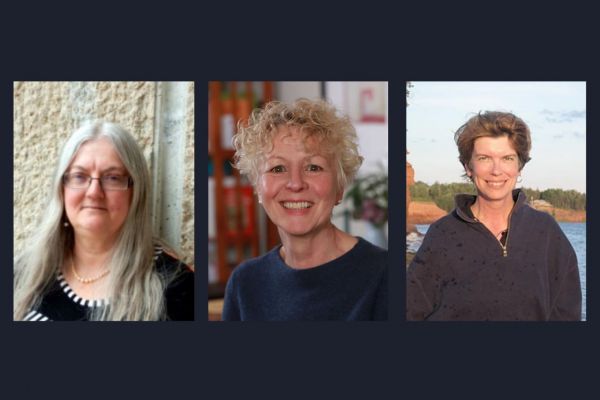