As originally published on December 1, 2017 in Biomass Magazine by Jason Hendry, the Office of Partnerships and Innovation's Assistant Director of Commercial Development.

What began as a project focused on developing pellets that could be shipped via pipeline led to the development of a new type of torrefied pellet that has increased bulk energy density, durability, and resistance to moisture.

Queen's University researchers have produced a spherical pellet that is highly durable, hydrophobic and resistant to impact and abrasion. Now an industrial partner is sought to advance the technology.

The original idea for a research project at Queen’s University in Kingston Canada, was to develop a wood pellet with the ideal characteristics for shipping in a pipeline. According Andrew Pollard, professor at the Department of Mechanical & Materials Engineering at Queen’s University in Kingston, to make that work, the pellet would require a spherical shape, to maximize packing within the pipeline. The pellet would also need to be highly durable, and resistant to impact and abrasion with the pipeline and with other pellets. And, of course, they would have to be capable of being submerged in water—the proposed carrier within the pipeline—for prolonged periods. At the time, such a pellet did not exist, and so the team at Queen’s initiated a research project to develop its own.

Immediately, torrefaction was of interest, as pellets made using this process not only had increased energy density, but also improved hardness and, perhaps most importantly, hydrophobicity. However, the cylindrical shape of existing torrefied pellets was not optimal for use in a pipeline, and the fractured ends served as sites for water ingress and the generation of particulates or fines. To survive being shipped through pipelines, the pellets would require a continuous, smooth and impervious outer surface that would minimize damage and water ingress. To achieve this, the team made pellets by compressing the biomass between two hemispherical dies, as opposed to extruding material through a die, as with conventional pellets. Another variation to conventional processing involved torrefying the biomass within the mold cavity prior to compressing, by heating the mold to a set temperature over a period of time, and then pressing the pellet. Interestingly, the team found that offgassing of the sample created an environment within the mold/die that prevented air from interacting with the heated sample, such that an inert atmosphere was not needed during the torrefaction step. The first pellets produced were dark brown in color, consistent with torrefied pellets, and had a smooth, hard and shiny outer surface. Unfortunately, they also had a weak equatorial plane, and were thus prone to breaking into two halves. 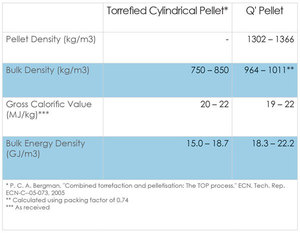 Not deterred, because the other attributes of the pellet halves countered many of the weaknesses of cylindrical pellets, the team focused its attention on the interactions between the biomass particles within the mold during compression, and determined that the weak equatorial plane resulted from insufficient particle-to-particle contact. Improved mixing amongst the biomass fibers was needed, and Pollard and the team redesigned the mold/die to function similar to an ice cream scoop. Subsequent pellets had the same impervious outer surface, but were significantly more robust, as evident from a modified impact test—for example, throwing the pellets against a concrete floor; they bounced with no effect on integrity. However, torrefying the biomass within the mold/die makes scaling the process to an industrial capacity difficult, if not impossible, and so the team changed its focus to determining whether the steps of torrefaction and pelletization could be decoupled, while still achieving the same, robust pellets.

To help, the team brought in David Strong, Queens professor and chair in design engineering at the Natural Sciences and Engineering Research Council. Strong’s assessment was that to be relevant industrially, the team needed to minimize the time the biomass spent in the mold/die, meaning either pretorrefying the biomass and loading it into the mold while still hot, or significantly increasing the heating rate of the biomass within the mold.

The first option was fraught with material handling challenges, particularly within a university lab setting, so the team focused on the latter. However, conventional thinking at the time was that the heating rate during torrefaction could not exceed 50 degrees Celsius, and that once cooled, the torrefied material was “set,” and could not be brought back to a state to form a robust pellet. The researchers challenged these assumptions, and through a series of experiments, demonstrated that biomass that had been previously torrefied and cooled could be rapidly reheated and compressed to form robust pellets consistent in quality with those obtained using the original process. This was a key finding that enabled the team to further develop the process to work equally well with either raw or pretorrefied biomass, with a near-zero hold time in the compression cycle. Multiple types of biomass, both woody and nonwoody, have been successfully used in this process including poplar, switch grass, weed canary grass, oat hulls and hemp.

As it turns out, the properties of Queen’s pellets, dubbed Q’Pellets, are also ideally suited for more traditional applications, such as cofiring with coal in the generation of electricity, and as a low-carbon fuel alternative in the production of cement. As with conventional torrefied pellets, the Q’Pellets, when compared to white or untorrefied pellets, have increased energy density, improved hardness and friability, and hydrophobicity. However, the compression molding process used for the Q’Pellets results in increased density that, together with their spherical shape and improved packing, leads to an increase in bulk density and therefore, bulk energy density. The Q’Pellets also have a continuous, smooth and impervious outer surface that minimizes the generation of dust, thereby mitigating the problem of dust explosions. And further, their shell-like surface minimizes the ingress of water—anecdotally, the team is aware of a Q’Pellet that survived a year and a half while being submerged in water, without any loss of durability.

To assess the commercial potential of the Q’Pellets, a spreadsheet-based model was developed to enable a techno-economic analysis and a simplified life-cycle analysis of Q’Pellets, cylindrical torrefied pellets and cylindrical white pellets. A case study based on a hypothetical, commercial-scale plant built in Williams Lake, British Columbia, with product delivery in Rotterdam, Netherlands, was developed to compare the production of each pellet type based on their internal rates of return, and life-cycle greenhouse gas emissions. The Q’Pellets had the highest modeled internal rate of return at 12.7 percent, with white pellets at 11.1 percent, and torrefied pellets at 8 percent. The simplified life-cycle analysis showed that Q’Pellets had the lowest life cycle greenhouse gas emissions of the three products, 6.96 kgCO2eq/GJ, compared to 21.50 kgCO2eq/GJ for white pellets and 10.08 kgCO2eq/GJ for torrefied pellets. At these levels of life-cycle greenhouse gas emissions, white pellets are above the maximum life cycle emissions to be considered sustainable under EU regulations. Sensitivity analysis was performed on the model by modifying input variables, indicating that white pellets are more sensitive to uncontrollable market variables, especially pellet sale prices, raw biomass prices and transportation costs. A Monte Carlo analysis was also performed, which showed that white pellet production is less predictable, and more likely to lead to a negative internal rate of return compared to Q’Pellet production.

The advantages of the Q’Pellet are clear, with increased bulk energy density, superior properties and reduced life-cycle greenhouse gas emissions. However, the Q’Pellet technology is still in a relatively early stage of development, and more work is needed to advance its technology readiness level. Both Pollard and Strong acknowledge that this will be best achieved by collaborating with an industrial partner that has a different, yet complimentary set of skills, to move the technology forward. As such, the university’s technology transfer office has been working to help identify industrial partners interested in developing and commercializing the Q’Pellet technology. With an issued U.S. patent covering the Q’Pellet mold/die design, and significant processing knowhow and expertise, the team believes that it has built a strong foundation upon which a new and proprietary pelletizing platform can be built.