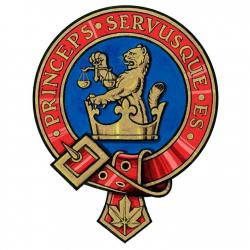 The Governor General is the head of the Canadian Heraldic Authority, which is the federal service responsible for creating heraldic emblems: arms, flags, badges.  The Rector at Queen's University at Kingston was granted a badge of office on October 15, 2004.

PRINCEPS SERVUSQUE ES, meaning "Be a leader and a servant"

Symbolism: The three colours are those of Queen's University. The puma is the symbol of the Office of the Rector, a tradition started by Rector Michael Kealy in 2000. The crown appears in the border of the arms of Queen's University as a reference to its name. The balance is a symbol of justice and equity and thus represents the Rector's role in acting as an ombudsperson for students. The strap and buckle design is characteristic of Scottish heraldry and thus refers to the fact that the position of Rector is based on a similar post in the four ancient Scottish universities. The maple leaf is a mark of Canadian identity.

Rector's Badge
Election of the Rector
History and Past Rectors