Truth and Reconciliation in the Classroom: History professors share their reflections

As Queen’s University and the Department of History in particular mark the National Day for Truth and Reconciliation (aka “Orange Shirt Day”), I have been reflecting on what it means to address Truth and Reconciliation in the classroom this year. On my first day of class for my Core Seminar HIST 320 Indigenous History of North America, I asked my students why they took the course and what they hoped to get out of it. For the most part, they said that they were interested in contemporary issues affecting Indigenous people in Canada. They wanted to learn about the history that has brought us to the current circumstances of Indigenous-settler relations in Canada today, and more importantly they wanted to learn about how they could be better allies to Indigenous people in their community.

As a historian of colonial and Indigenous North America, I am a little sheepish to admit that I am often more comfortable in the archives than campaigning for social change on the streets. Nevertheless, I wanted to support my students in their genuine desires to be better allies to Indigenous people. Overall, I tried to emphasize the importance of researching and listening to Indigenous voices and perspectives. While we have the seventeenth, eighteenth, and nineteenth century histories of Indigenous peoples in North America covered in the required readings, there was a desire to know about current topics. I shared with my students how I follow Indigenous issues by reading CBC news articles, watching APTN, or listening to podcasts (like the CBC podcast Unreserved hosted by Rosanna Deerchild). I also asked the students for suggestions, and they told me that there was a plethora of Indigenous content that can be found on social media platforms like TikTok. I also learned about relevant social media hashtags for this Thursday – #NDTR2021 #OrangeShirtDay #WeWearOrange #TRCCanada #TruthAndReconciliation #NationalDayForTruthAndReconciliation

While listening to CBC might work for me to keep up to date on Indigenous issues, my students, turn to social media platforms that I don’t even have on my phone. This is important because it means that our students can interface with Indigenous history and Indigenous issues in Canada in a unique and needed lens that goes beyond the required readings or time spent in the classroom. Unbeknownst to me until quite recently, platforms like TikTok provide a community for Indigenous creators to advocate, entertain, and educate people who are willing to learn about their culture and the history of this country.

In addition to researching and learning, I have also encouraged my students to speak up in their own social circles, purchase from Indigenous creators and Indigenous-backed businesses, and most importantly to acknowledge and learn from their mistakes. It is my sincere hope that more undergraduate students than ever will take notice of and engage with Orange Shirt Day (now officially recognized as the National Day for Truth and Reconciliation) this Thursday September 30, 2021.

Sometimes what we academics oddly refer to as the ‘outside world’ comes crashing into our classrooms. Most of us, I believe, welcome these teachable moments. As someone who teaches first-year Canadian history explicitly as a ‘history of the present,’ I actually depend on the eruption of political and cultural ‘moments’ during the school year so that students can grasp the power of harnessing the past to grapple with the dilemmas of our present. In the lead up to Canada’s first officially recognized National Day for Truth and Reconciliation, we have another such opportunity and challenge.

Back in June, when it was announced that September 30th would become the National Day for Truth and Reconciliation, I knew I wanted to introduce it in the first meeting of my first-year course this year. As we gathered for the first time just a few weeks ago, in a very steamy lecture hall, I asked students, how would it be possible to understand the proclamation of this new national day – where did it come from? why only now? what’s the difference between a statutory holiday and the grassroots Indigenous Orange Shirt Day upon which it piggybacks? – without some background in Indigenous histories? We also set it in the context of the ongoing ‘statue wars,’ in which the monuments to architects of the residential school system, such as John A. Macdonald and Egerton Ryerson, have been toppled or taken down.

In that first class, I always ask what specific dilemmas, issues, or questions students want to explore using the history of the present. Not surprisingly, Indigenous issues are high on their list. I also always ask how many in the class are in the Indigenous studies minor (and now, as of this year, the medial and major). There are always at least a few, who are then able to advertise to 150-175 first-year students that Indigenous studies is a possibility at Queen’s. There’s usually a mention of the Four Directions Indigenous student centre. That first class also includes a land acknowledgement. I ask students to say something about the Indigenous groups whose territory our lecture hall is built on. The answers come fast and thoughtfully. Say what we might about the sometimes-perfunctory performance of such acknowledgements, but I am convinced of their significance if for no other reason than I know that ten years ago the majority of students in my classes had no awareness of this. It’s a small but significant illustration that change can happen.

Most years, the conversation in this first meeting also usually includes one or two students in the class identifying themselves as Indigenous. I admire them, for that’s not an easy thing to do on the first day of a first-year course in front of a room filled mostly with strangers. Led by Indigenous students raising the issue of identity, it’s then my turn to talk about teaching Canadian and Indigenous history as someone from a non-Indigenous background. The concept of settler colonialism has been enormously productive in this regard, and not simply by wearing the identity of white settler, though that is of course part of it. The challenge represented by dual Indigenous and settler-colonial approaches moves us beyond our limited identities to think more about the particular perspective we adopt.

The example of this I used in our first class this year, as we all faced each other in masks, concerned epidemics, or the introduction by white Europeans of the “speckled monster,” or smallpox, among Indigenous communities beginning in the early 1600s. That story has most often been told by Canadian historians as the devastation and destruction of Indigenous peoples. There is a lot of truth to this, of course, but it is a narrative of Indigenous decline and decimation. Is this the story students, and perhaps especially Indigenous students, really want to hear? What if instead we look at it from a different perspective. What about the history of Indigenous knowledge about how to survive epidemics? Drawing on work by our colleague Dr. Scott Berthelette, I sketched for students the quarantine and other measures taken by the Hudson’s Bay Company and Indigenous peoples to stop the smallpox epidemic of 1779-1783. As Prof. Berthelette shows, the life-saving response to epidemic was passed down through Indigenous oral tradition. There’s a reason that in our current pandemic Indigenous communities in Canada were among the first, even before provincial and federal governments, to halt the movement of people through their territories to decrease the transmission of Covid. For Indigenous peoples, the memory of colonialism and its consequences lives on. For those of us in first-year Canadian history, we abandon the colonial narrative of Indigenous decimation and decline in favour of a perspective that centres Indigenous knowledge creation and cultural survival.

Does any of what transpires in my first class rise to the challenge posed by Truth and Reconciliation? Does it gesture in the direction of decolonizing the teaching and study of Canadian history? I can’t say for certain. I don’t have all the answers, not by a long shot. But as I think about past versions of this course, I do know that it has been moments like the National Day of Truth and Reconciliation, in conjunction with learning from the work of Indigenous historians, that it sometimes feels like we’re headed in the right direction.

This term, Prof. Maynard is teaching HIST 104: Pre-Confederation Canada – a History of the Present.

In support of this important day of reflection, Queen's will offer commemorative events, learning opportunities, and educational resources across campus to emphasize the university's own commitment to Indigenization and reconciliation. Learn more about how you can support the National Day of Truth and Reconciliation as a member of the Queen's community. 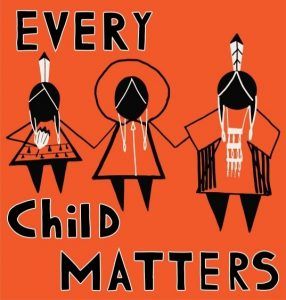