Co-winner of the 2016 Breakthrough Prize in Fundamental Physics 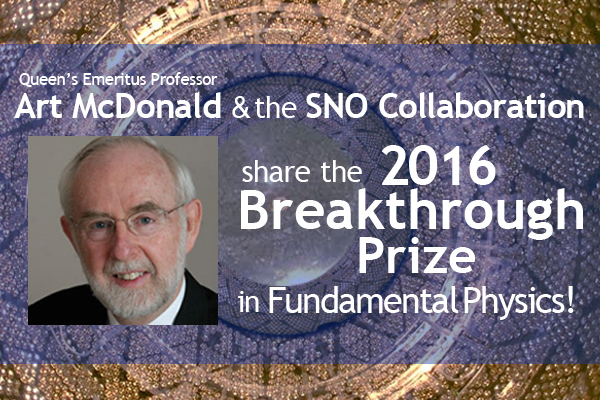 Congratulations to professor emeritus Arthur McDonald and the entire SNO Collaboration who have been awarded one-fifth of the 2016 Breakthrough Prize in Fundamental Physics!

The Prize was presented at 10 PM ET on Sunday November 8 by the Breakthrough Prize Foundation “for the fundamental discovery of neutrino oscillations, revealing a new frontier beyond, and possibly far beyond, the standard model of particle physics”. The $ 3 million prize is shared with four other international experimental collaborations studying neutrino oscillations: The Superkamiokande, Kamland, T2K/K2K and Daya Bay scientific collaborations.

Dr. McDonald joined the Department of Physics, Engineering Physics and Astronomy at Queen’s in 1989 and served as the director of SNO. He has been a professor emeritus since 2013. He is the co-recipient of the 2015 Nobel Prize in Physics.

For more information, see the Scientific American or the Breakthrough Prize.

For the full story, please see the Queen's Gazette.

Nobel Prize in Physics "for experiments with entangled photons, establishing the violation of Bell inequalities and pioneering quantum information science".