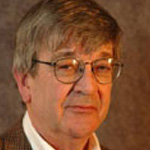 Malcolm Stott was a professor of physics from 1970 until his retirement in 2008. He taught Arts and Science, and Applied Science students at all levels and supervised many graduate students. He won the Undergraduate Award for Excellence in Teaching Physics in 1996 and 1998. He served as Head of the Department of Physics from 1982 to 1988, and was then Associate Dean in the Faculty of Arts and Science for five years.

His theoretical physics research is well known throughout the world and in 1980 he was awarded the Rutherford Memorial Medal of the Royal Society of Canada for his research work. Although he has had great success in all aspects of his career, he has always felt that the highest calling of a professor is teaching, wherein one has the opportunity to plant new ideas in young minds.

Congratulations to the winners of 2020-2021 Malcolm Stott Teaching Awards!

At the graduate student reception on October 2nd, the recipients of the Malcolm Stott Teaching Assistant Awards were announced...