A Brief History of Queen's University and the Physics Department

This sketch of the history of physics at Queen's developed out of a conference talk commemorating the 175th birthday of the University. Physics and astronomy have been taught here since the early days; an independent department was formed over a century ago; engineering physics was started about that time and research became a feature of the Department.

A brief chronology traces the development of the University from its small beginnings and gives the main steps that led to the university we have today and its physics department. Enormous changes took place over this period in what we have learned of the physical world, and we see this in the curriculum and what was taught as physics, or natural philosophy as it was more broadly termed. Three individuals who were pivotal in the development of physics at Queen's are featured and three memorable characters who were known to present members of the Department bring us up to date.

Those who are interested in delving further into the history of the University or the Physics Department might wish to consult the online "Queen's Encyclopedia". Especially valuable resources are the calendars for the various faculties. Digitized copies of these going back to the first, 1845/6 calendar of Queen's College are available online. These calendars list entrance requirements and procedures, fees, prizes, general regulations, and faculty members. Lists of courses and their content give insights into what was taught and chronicle the state of knowledge in the various subjects at the time. Also drawn on are documents from the Department's Collection & Artifacts. 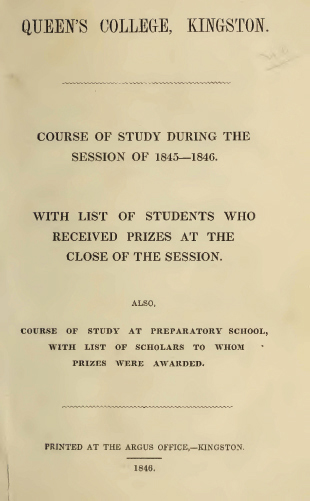 The front page of the 1845/6 calendar, the first academic calendar of Queen's College

Applied science and the training of engineers played an important role in the development of physics at Queen's but its establishing followed a devious route.

Astronomy has been a feature of the Department since its beginnings.  See V.A. Hughes'  The Early History of Astronomy at Queen's University.

Up until 1919 the undergraduate physics courses were under the Faculty of Arts and we can think of this program of study as the forerunner of the present-day Physics Program through the Arts and Science Faculty.

Graduate study was formally established at Queen's in 1889 including the offering of the PhD. In the 1920's the MA and MSc degrees  were roughly as we have them today. However the pattern in physics was for the promising student to take the MSc at Queen's and continue to the PhD in the United Kingdom at Cambridge. Several influential figures followed this pattern. Some of these are featured later. There were ups and downs in graduate enrolment but as of 2017 there were 36 MSc students and 42 PhDs.

Physics or Natural Philosophy, which it came under, was initially taught in "Summerhill" along with other sciences, and then moved to Carruthers Hall in 1893. 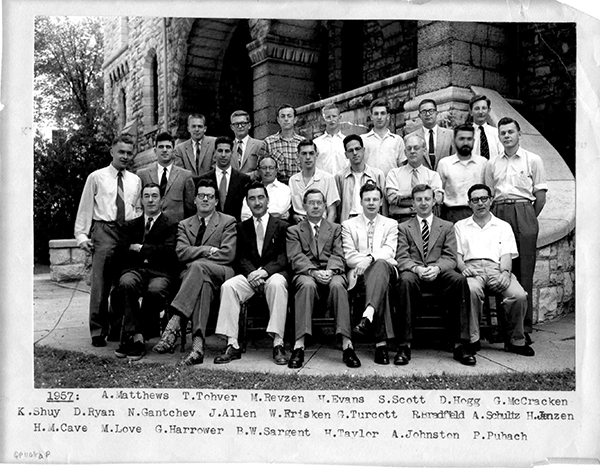 The Department of Physics - 1990, Link to the Faculty List 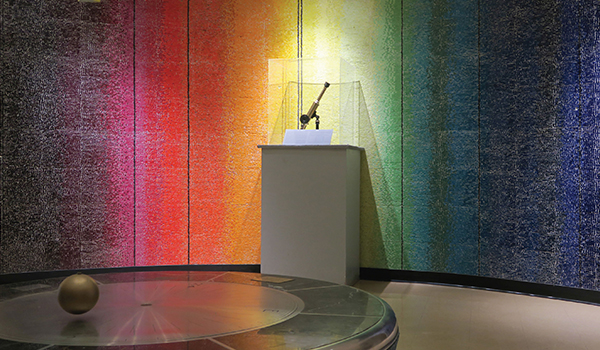 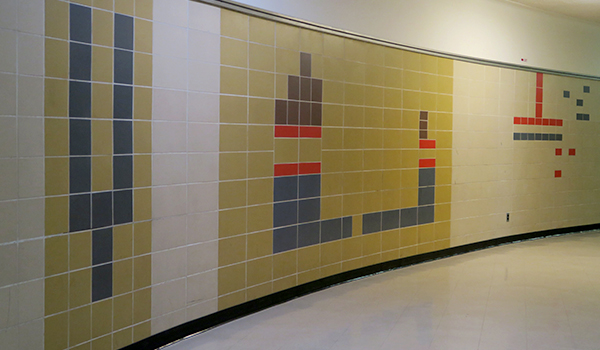 Mural depictions of scientific equipment on the walls of Stirling Hall 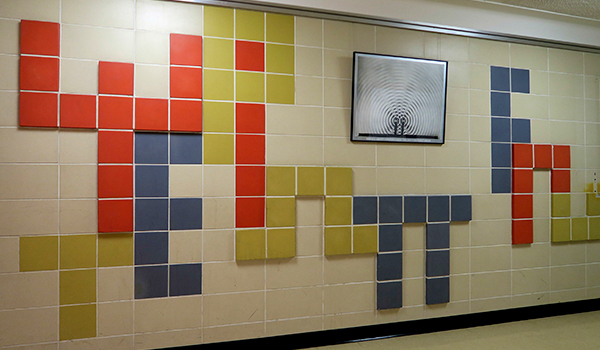 Mural depictions of Greek letters and other symbols used in physics on a wall of Stirling Hall.

What was taught as physics

The Calendar of 1851/2 lists (note: this was after Faraday's electromagnetism discoveries , but before Maxwell):

50 years on: note that the 1891/2 Calendar lists less Latin and Greek — Principia now to be read in translation.

Meanwhile, what has been happening in physics?

There are three key figures who contributed greatly to the development of physics at Queen's in the early years and left their mark on the Department we have today. 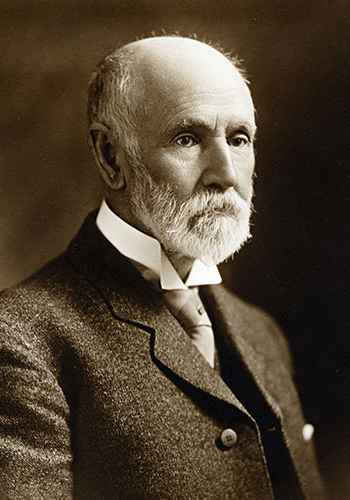 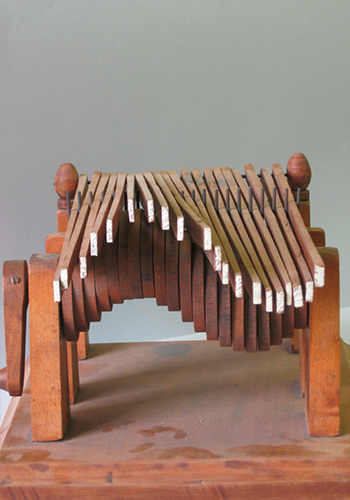 A lecture demonstration of transverse wave motion designed and constructed by Dupuis. The Physics Historical Collection.

The 9-Dial Clock designed and constructed by Dupuis for astronomical time-keeping. 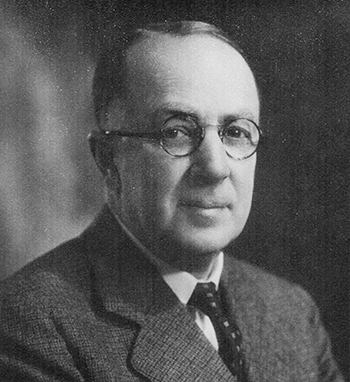 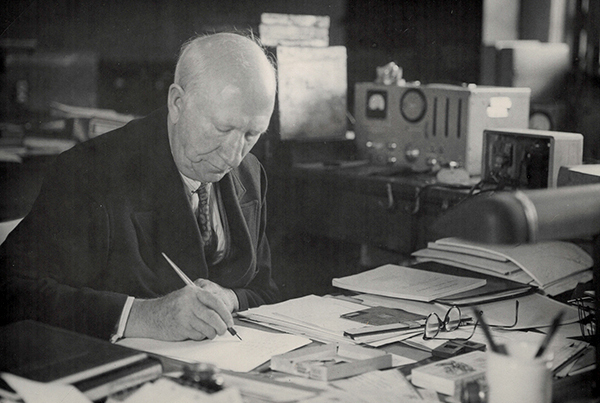 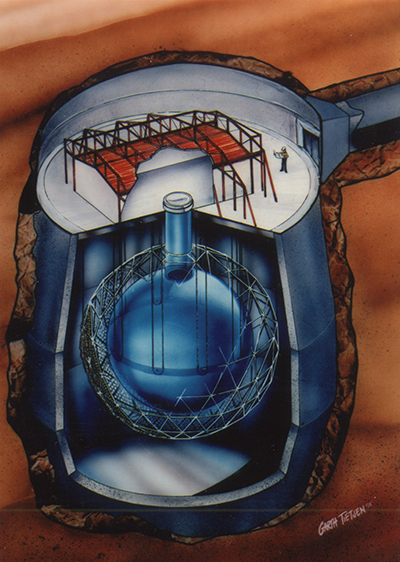 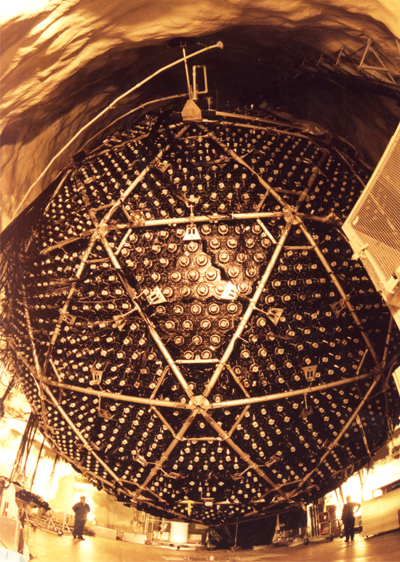 The SNO detector deep underground in a Sudbury mine

Two Queen's undergraduates who following the usual research pattern of the times were supervised by Gray at Queen's for the MSc and then by Rutherford at Cambridge, and returned to Queen's to teach:

A third, Edmond Watson, a friend of Cave at Cambridge also came to Queen's.
All came to Queen's to begin long professorial careers, and are remembered by many of us. 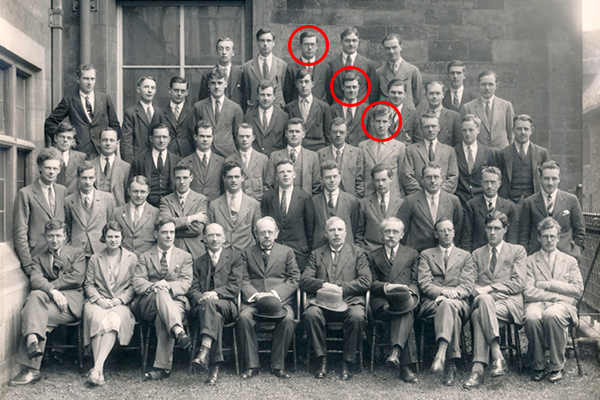 Professor Hugh Evans (class of 1955) recalls Cave, in charge of the engineering physics laboratory, was slow to mark the students' lab books. Hugh went to Glasgow for graduate studies and on his return to Queen's with his PhD to teach, Cave gave him marked lab books for himself and his former classmates.

On a later occasion, while teaching 1st year engineers, Cave forgot to prepare the examination paper. Alerted to this on the day of the exam, he mobilised the staff, wrote the exam questions and page by page had it duplicated and run over to the exam hall. He died in 1992 at age 91. 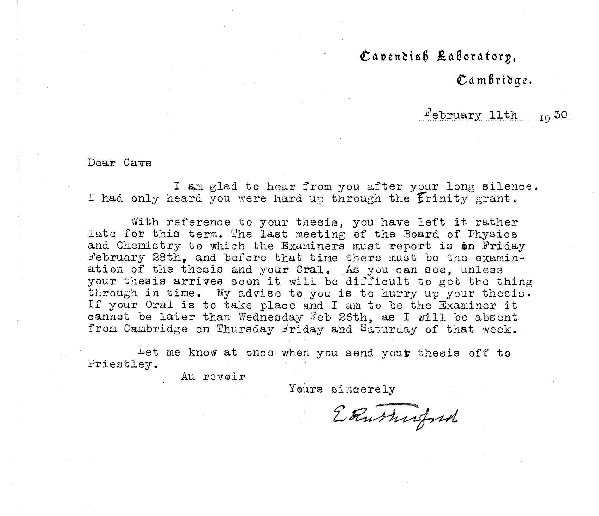 A letter from Rutherford to his graduate student Cave. The Physics Historical Collection.

Queen's BA with the Medal in Physics 1926. He completed his MA under Gray in 1927 and went on to Cambridge for doctoral work under Rutherford and Ellis, and returned to Queen's as Lecturer in 1930. The work of his PhD degree on the beta spectrum laid an experimental foundation on which the radioactive decay theory of Enrico Fermi was based. This theory postulated the existence of the neutrino, a very weakly interacting particle which was the subject of later preeminent Queen's work.

In 1943, on leave of absence, Sargent was asked to join the Anglo-Canadian Atomic Energy Project in Montreal and then at Chalk River, where he served as Head of Nuclear Physics and then as Physics Division Head. He oversaw the development of the ZEEP nuclear pile and the NRX reactor which in the late 40's was the world's most intense neutron source. He returned to Queen's as Head of Physics in 1950 until 1967. He directed nuclear physics accelerator based research and taught until his retirement in 1972. He died in 1993 at age 87.

A student of Gray, then at McGill, and again Rutherford at Cambridge, Watson was lured to Queen's in 1930 as Lecturer. He developed an interest in oceanography and in 1932 began work on the Passamaquoddy Project Commission and later on the Bay of Fundy power project. He was seconded to the US Navy during WWII to work on sound transmission through layers deep in the Atlantic Ocean. He was a very skilled experimenter and set up and maintained a Standards Laboratory in the Dept. The Department has film of Edmond's celebrated lecture demonstration on electrostatics in which he ladles charge from one container to another, and uses a tiny gas flame to detect electric potential in the space around a charge. He died in 2001 at age 98.

Which brings us to the arrival of Alec Stewart in 1968 who followed Sargent as Head of Department. He had a celebrated career in condensed matter physics research first at Chalk River, and then at the University of North Carolina. The faculty complement increased greatly around this time; in particular condensed matter physics and engineering physics were strengthened. Many of those who joined the Department at that time still remember how it was.

I wish to acknowledge folks who have contributed to this, particularly: