Could these two stars have violent colliding winds? 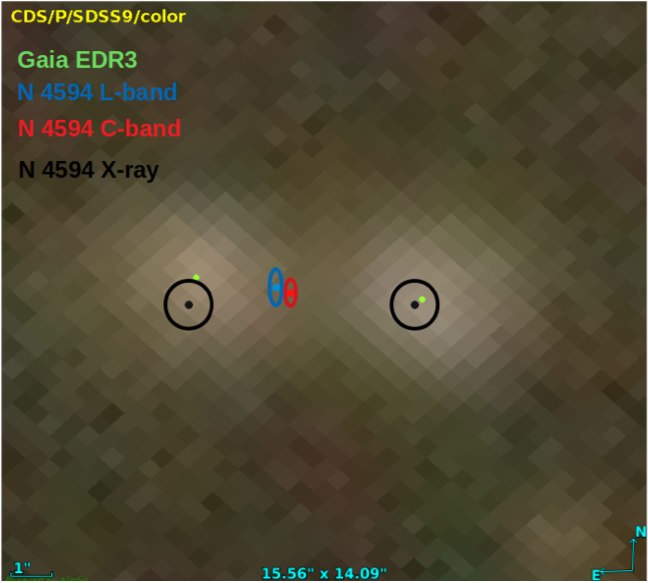 In a study led by Judith Irwin of Queen's University, a newly discovered binary star system shows the unusual trait of having associated radio and X-ray emission.

Radio observations are from the Very Large Array and X-ray observations are from the Chandra satellite. The radio emission is from synchrotron radiation in which high energy electrons spiral around magnetic field lines. The star system was discovered in the field of view of the Sombrero galaxy (NGC4594) but is probably in our own Milky Way galaxy. Colliding winds can occur if both stars are extremely massive and emitting powerful winds from radiation pressure. Both stars, if sufficiently massive, will eventually result in supernovae, though not at the same time.

Accurate optical positions are from the Gaia Early Data Release 3, but no distance is known yet. With a distance, energies and masses can be calculated. The initial measurements for this study were made by Queen's Physics undergraduate student, Jacqueline Dyer, who is listed as a co-author.

The paper has been accepted to Monthly Notices of the Royal Astronomical Society, and was released on a free public archive on Feb. 28, 2022.
arxiv.org/abs/2202.13225

First time evidence of shell-like structures in the Milky Way

Galaxies grow by cannibalizing smaller satellite galaxies according to the standard model for how structure forms in the Universe...

Image of Magnetic Field of a Spiral Galaxy of NGC 4217