Prof. McDonald is co-winner of the 2015 Nobel Prize in Physics! 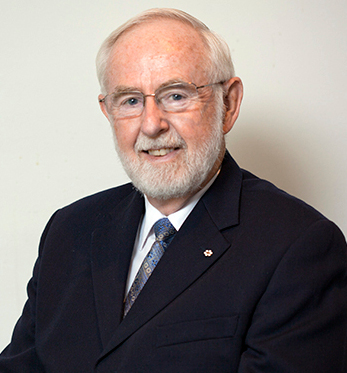 Professor Emeritus Arthur McDonald from the Department of Physics, Engineering Physics and Astronomy is the co-winner of the 2015 Nobel Prize in physics.

The announcement, made Tuesday morning by the Royal Swedish Academy of Sciences in Stockholm, said Dr. McDonald won the award, along with Takaaki Kajita of the University of Tokyo, "for their key contributions to the experiments which demonstrated that neutrinos change identities."

The findings solved a puzzle that physicists had wrestled with for decades, the academy added in its announcement.

Dr. McDonald’s research took place at the Sudbury Neutrino Observatory (SNO) scientific collaboration, a cutting-edge research facility located two kilometres underground in an active nickel mine. The experiment demonstrated that neutrinos from the sun were not disappearing on their way to earth and were captured with a different identity when arriving at SNO.

Meanwhile, Dr. Kajita presented the discovery that neutrinos from the atmosphere switch between two identities on their way to the Super-Kamiokande detector in Japan.

This “metamorphosis” requires that neutrinos have mass.

For particle physics this was a historic discovery. Its Standard Model of the innermost workings of matter had been incredibly successful, having resisted all experimental challenges for more than 20 years. However, as it requires neutrinos to be massless, the new observations had clearly showed that the Standard Model cannot be the complete theory of the fundamental constituents of the universe.

The discovery changed our understanding of the innermost workings of matter and can prove crucial to our view of the universe.

Dr. McDonald arrived at Queen’s in 1989 and served as the director of SNO. He has been a professor emeritus since 2013. He earned his PhD in 1969 from the California Institute of Technology.

For the full story, please see the Queen's Gazette.

Read the press release from the Swedish Academy of Sciences

Nobel Prize in Physics "for experiments with entangled photons, establishing the violation of Bell inequalities and pioneering quantum information science".