QUAA Book Talk: Curtis Carmichael with Butterflies in the Trenches

The Queen's University Alumni Association (QUAA) Board of Directors, in partnership with Queen's Toronto Alumni Branch, and Queen's Athletics, invited all members of the Queen's community to join the final event of the 2021 QUAA Alumni Volunteer Series. Curtis Carmichael, Artsci/PHE’16, joined us for a virtual book talk, celebrating the Oct. 1 release of his memoir Butterflies in the Trenches, the world’s first Augmented Reality Memoir inspired by his life and mission to break the cycle of poverty for today’s youth, just as he did for himself.

Described as “A vital memoir from one of Canada's most courageous athletes and anti-racism activists, Butterflies in the Trenches is a riveting look at Toronto public housing, the drug trade for a childhood dealer, and the journey of a young Black man seeking redemption through sports and STEM education."

Butterflies in the Trenches may be purchased directly from Curtis Carmichael's website.

The soon-to-be released app that brings to life over 100 illustrations featured in Butterflies in the Trenches (BIIT), as shown in a trailer of the BIIT Mobile App. 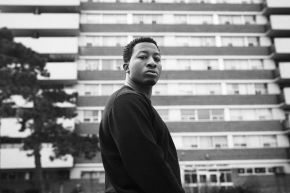 Curtis Carmichael, Artsci/PHE'16, is an award-winning social entrepreneur, technologist, STEM and hip-hop teacher, computer programmer, and the former Director of a Code Ninjas franchise. He is the author and mobile app developer for the World’s First Augmented Reality Memoir, Butterflies in the Trenches. As a self taught computer programmer, Curtis built the mobile app which brings his memoir to life by giving readers access to hidden content that can be activated when holding your phone over photos throughout the book. His cross-Canada cycling tour Ride for Promise raised funds for Toronto Community Housing afterschool programs and was featured in an award winning documentary. Curtis' journey has been covered by CBC National News, Global News, CityNews, The Tyee, USPORTS, and TEDx.

In his spare time, he is a Team Canada Duathlete for the 2021 Multisport World Championships. Curtis grew up in Scarborough, Ontario, where he still lives, and has dedicated his life to advocating for Black and racialized youth in low income communities in the City of Toronto and across Canada. He holds a Bachelor’s in Physical and Health Education from Queen’s University and a BEd in STEM education from Ontario Tech University. Curtis has been the recipient of numerous awards including USPORTS National Russ Jackson, Herbert H. Carnegie National Citizenship, City of Toronto Spirit of Sport Diversity and Inclusion and the City of Toronto Hall of Honour inductee.

Back to Virtual Events