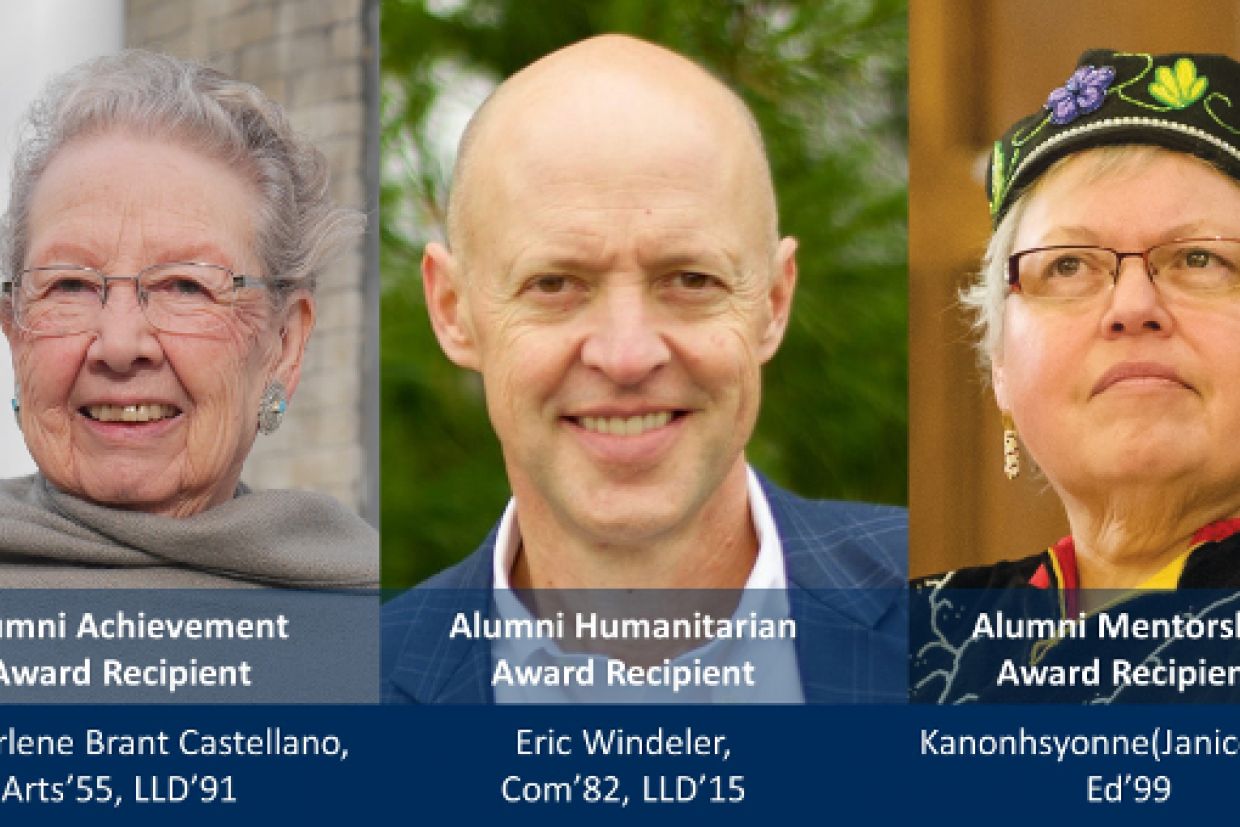 Two champions of Aboriginal issues, a mental health advocate, and a rising media star are among this year’s recipients of the Queen’s University Alumni Association (QUAA) Awards.

“Queen’s would not be the university it is today without the tireless work of its staff, alumni, and volunteers. The Awards Gala is a chance to acknowledge these dedicated people and give them the recognition they deserve,” says Principal and Vice-Chancellor Daniel Woolf, Artsci’80.

Dr. Brant Castellano is the recipient of the Alumni Achievement Award, the highest honour bestowed by the QUAA. The member of the Mohawks of the Bay of Quinte is a leader in Aboriginal education and research who has dedicated her life to the rights and well-being of Indigenous people. She was a professor of Native Studies at Trent University and has served on many government and academic research committees. She retired from Trent in 1996 but continues to work on reconciliation between Aboriginal people and all Canadians, including the Queen’s Truth and Reconciliation Task Force.

The other recipients being honoured at the awards gala are:

·         Dr. John Allingham, professor in Biomedical and Molecular Sciences (Alumni Award for Excellence in Teaching): Dr. Allingham has received praise from his students for his dedication to teaching and going above and beyond. He is not the type of teacher who stands in front of the classroom and talks for an hour. He believes in active learning. He creates eye-catching videos and brings in props to help explain complex topics. He also spends countless hours working with students outside the classroom on projects such as the Queen’s Genetically Engineered Machine Team (QGEM).

·         Eric Windeler, Com’82, LLD’15 (Alumni Humanitarian Award): Mr. Windeler is a mental health advocate who founded Jack.org (formerly The Jack Project) in 2010 with his wife, Sandra Hanington, after their son, Jack, died by suicide while in his first year studying at Queen’s. Mr. Windeler quickly built Jack.org into a national youth mental health organization that works directly with young leaders to develop initiatives to improve mental wellbeing, currently active at over 150 schools and campuses across Canada.

·         Kanonhsyonne (Janice Hill), Ed’99 (Alumni Mentorship Award): Kanonhsyonne is the former director of the Four Directions Aboriginal Student Centre who was recently named the inaugural Director of Indigenous Initiatives at Queen’s. She has been a long-time advocate for Indigenous students at Queen’s and in the Kingston community. She has spent countless hours on committees and working with staff and administrators to develop a welcoming and supportive environment for Indigenous students.

·         Sue Bates, Artsci’91 (Herbert J. Hamilton Volunteer Service Award): Ms. Bates has inspired many alumni and volunteers with her overwhelming love of all things tricolour. She has a long history of volunteering for both Queen’s and the alumni association. The former University Council member launched an alumni branch in Turks & Caicos in 1999 when she lived in the Caribbean country. When she returned to Kingston, she continued to volunteer with the local branch, eventually becoming Kingston Branch President. She is currently the president of the QUAA.

·         London UK Branch (Initiative of the Year Award): The Branch hosted a talk with track star Stef Reid, Artsci’06. It helped more than 100 alumni reconnect with Queen’s and deepen tricolour pride as the World Para Athletics long jump champion inspired everyone with her story of how she went from Queen’s to the Paralympic Games.

·         Elamin Abdelmahmoud, Artsci’11 (One to Watch Award): Mr. Abdelmahmoud has come a long way since his days as news director at CFRC and has emerged as a rising Canadian media star. He is currently an editor at Buzzfeed Canada and is a regular panelist and contributor on CBC’s The National.

·         Jasmit De Saffel, Artsci’17 (Outstanding Student Award): Ms. De Saffel excelled both academically and as a volunteer with various Queen’s organizations. She served on the Queen’s University Senate and held various positions with the Queen’s Student Alumni Association, Alma Mater Society, Residence Society, and Queen’s Journal. All her efforts earned her an Ontario Volunteer Service Award from the provincial government. She deferred her acceptance to law school for a year and is currently a parliamentary assistant working in the Canadian Senate in Ottawa.

·         Edmond Chan, Artsci’97 (Marsha Lampman Branch Volunteer Award): Mr. Chan has been volunteering with the Hong Kong Branch of the QUAA for more than 20 years and was instrumental in helping coordinate the Queen’s 175th Celebrations in Hong Kong in May 2017.

·         Julia Reid, Artsci’08 (Rising Star Volunteer Award): Ms. Reid is currently the president of the New York City Branch. She has been working hard to build the alumni community in the Big Apple by recruiting new volunteers to the Branch executive and hosting about a dozen events over the past two years.

The awards will be handed out at the QUAA Gala Dinner on April 7, 2018.